Nearly 10 years ago, the opening cinematic for World of Warcraft’s second expansion The Burning Crusade heralded the return of misguided anti-hero turned madman (madelf?) Illidan Stormrage, the first Demon Hunter, who taunted players with the now-infamous line, “You are not prepared!” By the end of the expansion, though, players proved otherwise, venturing into the Black Temple and, with the help of the Warden Maiev Shadowsong and the Broken Draenei Akama, putting an unceremonious end to Illidan’s life. And I was so pissed off.

At the time of his defeat during The Burning Crusade, Illidan’s apparent death also signaled the death of my hopes of my own Night Elf (a Rogue whom I have roleplayed as a Demon Hunter since sometime around Wrath of the Lich King) ever being able to actually take up the class’s iconic warglaives and blindfold outside of the imaginary realm of RP. Needless to say, when the announcement came that Legion would introduce Demon Hunters as a hero class – the first since the concept of hero classes was introduced by Death Knights in Wrath – I was a little bit excited, to put it mildly. So now that I’ve been given access to the expansion’s beta test (with the expansion’s official launch just over a month away), I figured I’d indulge my excitement by checking out the new class and its starting experience to see if it lives up to the lofty expectations I’ve set.

This piece will touch on the class’ starting experience and lore, so be warned: There are spoilers ahead.

At the character creation screen, I was immediately pleased to discover that, in addition to the standard array of customization options like skin color, hairstyle, hair color, and so forth, I was able to choose from an array of options unique to the Demon Hunter. There are a variety of tattoo designs which can be customized in a number of colors (including the traditional felfire green, of course), various styles of demonic horns, and to my delight, a respectable selection of different blindfolds (including the option to bare your felfire-infused eyesockets sans blindfold). 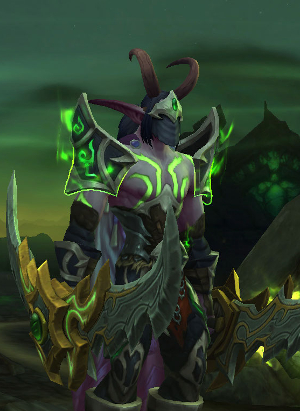 The Demon Hunter’s journey begins sometime prior to Illidan’s fall at the Black Temple, on a fragment of the Burning-Legion-controlled world of Mardum. Here, a contingent of Illidan’s followers, including the player character, are entrusted with the task of recovering the Sargerite Keystone, an artifact created by Sargeras that acts as a skeleton key that can be used to access any Legion world.

Before this mission can be carried out in full, however, the player is asked to use the Legion gateways scattered throughout the zone to summon in reinforcements from the factions loyal to Illidan – the Ashtongue Broken Draenei, the Coilskar Naga, and the Shivarra – and to rescue a number of Demon Hunters who have managed to get themselves imprisoned by the Legion. In doing so, players will eliminate a series of powerful demons and absorb their powers, unlocking new abilities.

At the outset, the Demon Hunter’s toolbox of abilities is rather limited, but even the few starting abilities – such as Fel Rush, a charge ability that deals damage to any enemies in its path – speak to the class’s emphasis on mobility and lethality. Also of note is the Demon Hunter’s ability to double-jump and, while airborne, to spontaneously grow a pair of demonic wings and glide safely from any height. Demon Hunters are also granted the innate ability to use their spectral sight to see enemies and treasures through barriers and to reveal stealthed or invisible enemies. To power their abilities, Demon Hunters utilize a combat resource called Fury, which is generated by using specific abilities such as the Demon’s Bite glaive attack.

For the most part, the Demon Hunter starting zone provides a fairly bog-standard linear questing experience of running around, talking to people, killing things, and all that good stuff. But I was pleasantly surprised to discover that, for those players who are inclined to explore off the beaten path, there are a number of named rare-spawn mobs that drop some fairly useful pieces of equipment to help fledgling Demon Hunters get a leg up on the competition.

After eliminating the Burning Legion’s leader on this fragment of Mardum, Brood Queen Tyranna, and recovering the Sargerite Keystone, the next order of business is to return to the Black Temple to repel an attack from the forces of Shattrath City. Curiously, however, that’s not where you actually end up. 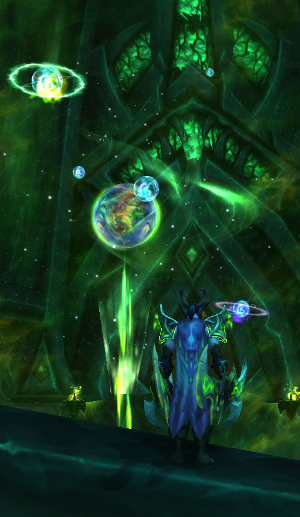 Instead, you find yourself in the Vault of the Wardens, where Illidan (and a great many other Demon Hunters) are imprisoned. You are greeted by Illidan’s personal prison guard, Maiev Shadowsong, who informs you that the infamous Orcish Warlock Gul’dan has broken into the prison with assuredly malevolent intent. It is up to you, of course, to fend him off. You are joined in this task by a number of fellow Demon Hunters, most notably including Kayn Sunfury, who led the assault on Mardum, and Altruis the Sufferer, a deserter from the Illidari that many players first encountered as a questgiver NPC in Nagrand during The Burning Crusade. It’s clear from the get-go that they don’t exactly see eye-to-eye, which I guess isn’t surprising considering neither of them has eyes to begin with.

The Vault of the Wardens portion of the questline, while undeniably interesting from a lore perspective, struck me as being a bit tedious; despite there being only two major quests to complete there, it took me a substantial amount of time to free all of the imprisoned Demon Hunters – despite the fact that there are prison cells all over the place, only a select few can be interacted with, which I found mildly irritating – and kill enough demons to collect the necessary amount of fel energy.

Nonetheless, after your tasks are completed, you are taken to the Vault of the Betrayer, Illidan’s prison, just in time to watch Gul’dan – with the help of the traitorous Warden Cordana Felsong – spirit Illidan’s body away for his own nefarious purposes. Having failed to protect Illidan, the only remaining choice is to flee from the Vault of the Wardens in pursuit.

By the time you’re prepared to leave the vault, Demon Hunters will have racked up a full hotbar of abilities (and then some) and reached level 100, just in time for the final fight of the starting zone, which pits the Illidari against the fearsome Eredar Bastillax, leader of the Legion’s invading forces. The fight is an intense one, allowing you to put all of your newfound abilities to good use, and I have to say that I had a blast with my Demon Hunter’s kit of skills. They’ve got a tool for almost every job, whether it’s going in for a full-on assault with Blade Dance or putting yourself at a safe distance with Vengeful Retreat. Ranged attackers aren’t safe either, thanks to the abilities Glaive Throw and Eye Beam (the latter of which is a guaranteed crit every single time, resulting in some pretty nasty damage).

The Demon Hunter’s Metamorphosis ability, I think, deserves special mention here, because it really does make you feel like a badass (and changes your character’s model to look the part, to boot). As a Havoc-specced Demon Hunter, not only does it grant you a fairly significant 25% haste increase, but it also changes your Chaos Strike and Blade Dance abilities into Annihilation and Death Sweep, respectively, greatly increasing both the damage and utility of both skills.

At long last, I escaped from the Vault of the Wardens with my fellow Demon Hunters, where I was greeted by Khadgar, who promptly teleported me to the entrance of Stormwind Keep. Although this is where most Demon Hunters’ adventures in the world of Azeroth will truly begin, it’s where mine – because of a wish to not spoil too much of the new content for myself – will end.

All things told, I can decisively say that the nearly decade-long wait for Demon Hunters to be introduced as a playable class was well worth the wait, at least for me. Not only do I finally get to look as badass as Illidan himself, complete with blindfold and warglaives and glowing fel-infused tattoos, but the class plays with the exact mix of agile melee combat and demonic magic power that I had always hoped for.

Bethesda Softworks has also pulled its games from GeForce NOW

The Daily Grind: What options do you like in your MMO’s...