This week’s Massively Overthinking topic is from a reader named Yasser, who asked us:

“If you had to pick one MMO to experience all over again as a new player, which one would you pick? In other words, which MMO gave you the best newbie experience?”

Hindsight is 20/20, right? I mean, you only truly get the newbie experience once; every newbie experience after that has the advantage of having to introduce you only to the game, not to the entire genre of online gaming the way the first one did. Still, I bet most of us — and you! — have a pretty good idea which MMORPGs are best for a true newbie. Let’s sound off for this week’s edition!

Andrew Ross (@dengarsw): Honestly? I usually have hated being a newbie ever since “end game” became a thing, which is why I look for MMOs that have “end games” you’re working on from the start. That’s why I’m giving this to Darkfall Online and ArcheAge (though admittedly I never hit the cap in AA). In both games, I remember getting mounts, cool spells, and generally doing a lot of cool things that didn’t seem to drastically increase or decrease because of my power but rather because of the social connections I did (or didn’t) make, from risking my boat against player pirates to stealing blueberries. Friends could jump in and make an immediate impact on guilds, alliances, and even a bit on minor battles (especially if on a large ship or seated safely someplace to make a healing station). 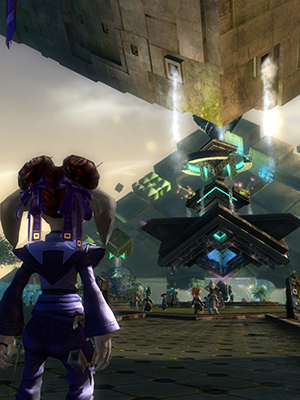 Brianna Royce (@nbrianna, blog): As much as I love sandboxes, I could never give any sandbox the nod in this department — themeparks simply introduce people better to the genre. I considered picking Star Wars: The Old Republic here; its introduction is flawless. But practically speaking, I think Guild Wars 2 edges them out. Why? GW2’s newbie experience (and I’m talking the 1-10 game here) scales really well whether you’re totally new to online games or are a veteran of a dozen MMOs. When my not-quite-kindergartner can make it through early Guild Wars 2 unscathed (and under supervision, of course!), and I myself am still having a good time and finding challenges, I know it’s doing something right.

RIFT should get an honorable mention too; I think it does a better job than World of Warcraft at easing people into the game without making them feel as if they are literally in a tutorial for dummies (a problem I had with WildStar’s original design).

I can’t say my picks are the most memorable newbie experience I ever had, though, but I think they do the best job of making the experience one people don’t flee from, which I can’t say for favorite games like Ultima Online or post-NGE Star Wars Galaxies.

Eliot Lefebvre (@Eliot_Lefebvre, blog): It’s hard to say what game gives the best experience as a new player, since I only got one of those (and for the record, Final Fantasy XI had and has a terrible one). But I have to give some props for Star Wars: The Old Republic starting you right off with an opening crawl, a bit of dialogue, and some questing. Right out of the gate it lets you know what it’s about and what the game wants to accomplish.

Honorable mention should go to World of Warcraft for consistently solid new experiences for players starting fresh and the effective slow roll marched out by Star Trek Online. Dishonorable mention goes to RIFT, which had a starting experience that always felt very jumbled and disorienting even when I knew what was going on with the actual game.

Justin Olivetti (@Sypster, blog): Regarding new player experiences, Lord of the Rings Online dwells in a special place in my heart. I fondly remember getting into the head start program two weeks or so before the official launch, when the game capped levels at 15. This kept the entire population right there in the newbie zones for the duration of the head start, and it was such a wonderful experience in so many ways. Because of the cap, there was no race to the top; we had the luxury of trying out crafting and alternate classes without feeling like we were “falling behind” the rest of the crowd. And the excitement was certainly palpable. That mixture of being giddy and being relaxed was something I’ve never seen in any other MMO early area, probably because nobody’s really done something like this before or since.

Larry Everett (@Shaddoe, blog): I think that my answer to this question is obvious, and I was tempted not to answer at all. I believe that Star Wars: The Old Republic hit the new-player experience right on the head, and I don’t think that any other MMORPG has been been able to match it; even the other story-driven MMOs like Elder Scrolls Online or The Secret World don’t match it. The choices, the mechanics, and character development in the newbies zones of SWTOR are important to the overall plot to the game; in fact, many of those early choices will come back to haunt you in the later game. Secondly, the abilities that you gain in that newbie zone are core to the gameplay of the class as a whole, so it doesn’t feel like wasted time like the over-tutorialized ESO or the jump forward in level like TSW. I’m not saying that either one of those ways of doing it are bad, but it seemed to mean more to me in SWTOR than the other games in the genre.

Hearthstone promises a mix of RPG and roguelike when Mercenaries arrives...