END_OF_DOCUMENT_TOKEN_TO_BE_REPLACED
It’s nearly that time again — time for the next Path of Exile expansion! Few games can boast an expansion schedule that runs like clockwork, but PoE does so with new leagues every three months and expansions every six. Because of that, players already knew approximately that the next expansion and league would start sometime around September. Now we have an exact date: September 2nd. And we also now have the details of both!

I sat down with Producer Chris Wilson to learn all about this next expansion, dubbed Atlas of Worlds. The main crux of the expansion is adding to the maps at end game, both in number and in story elements. And the next league, which debuts on the same day of the expansion, is called Essence league. Here, you can get the details on both.

It’s all about the maps. Path of Exile’s next expansion adds much more depth to the end-game running of maps. For one, there is now story involved. Two, there are tons of revamped maps, and even a 30 brand-new ones for a total of 100. Three, there is cool new loot directly tied to and available only on certain maps.

Wilson noted that the story in PoE abruptly stopped once players reached maps. However, players enjoy the game’s story, so to just end was a bit jarring. Now, however, they can have the best of both worlds. Once players finish their first map in the expansion, they will be greeted by Master Cartographer Zana in the Eternal Laboratory. She is going to ask to join the players on their journeys through maps in order to learn more about an entity called The Shaper, who is creating the maps. Getting to The Shaper will involved traversing the atlas (of worlds!) by fighting through the various maps. Once they reach the center, players will have to acquire the four parts of the key to enter where The Shaper is. Each of these key pieces are held by one of the four guardian of the void bosses, the phoenix, chimaera, minotaur, and hydra (which are essentially like Act bosses).

Beyond adding story, another big change is that maps are no longer just random things unrelated to each other. In Atlas of Worlds, the map instances are actually all interconnected on one giant atlas. This web has a number of different paths to get to the center, where players can finally face The Shaper. There are four themed starting zones on the atlas to begin the journey, one on each corner. But the pathways branch out in various ways, so starting on one corner does not force you into facing one specific guardian. Wilson said it is definitely possible to work through the entire map and acquire all four guardian key parts yourself, but since certain items will only drop on certain areas of the map, most players will probably prefer to focus on their favorite maps and specialize in a certain quadrant of the map and then trade others for the remaining key parts.

Spoiler: If you want to see the entire Atlas uncovered, click here. 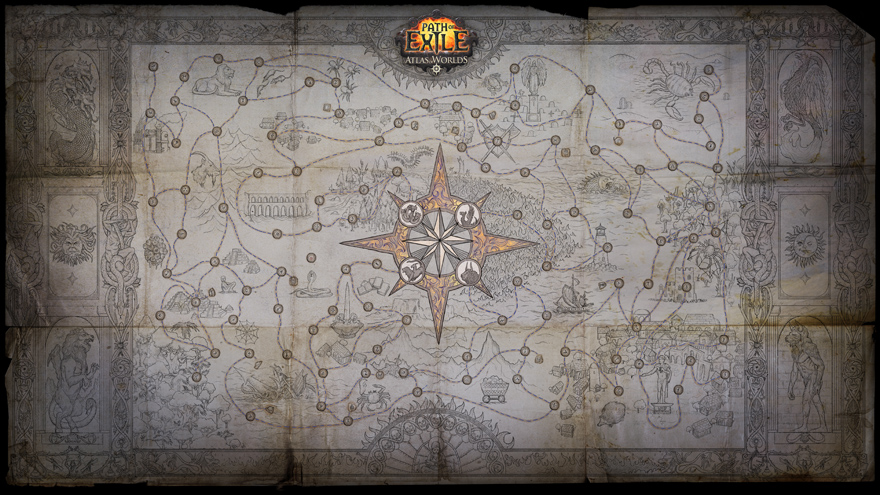 Previously, there were 60 to 70 maps in the pool of maps that players could randomly encounter. Wilson noted that these were usually just reskins of other areas. Now, however, there will be much more variety. “We’ve tried very hard with the additional ones we’ve added to this expansion to make them far more unique and interesting,” he said. “So these areas will look nothing like the rest of the game.” The team used different tiles sets together to make some unique areas, like the lush oasis amid the scorched desert, outdoor cliffs with a city, and rivers of lava and ice. There is also one map that adds more verticality, where players will fight down in the streets and then way up on the ramparts.

Which corner will players start in? That depends. The corner maps will drop in the main game. Once you are in the atlas, maps for the connected areas will start dropping. The boss in each map has a high chance of dropping another map. You can’t access the next ones in the chain until you get a map, so depending on your RNG luck, it could take some time to progress. As Wilson pointed out though, “If you repetitively use the maps on a given track and ignore the other ones, you will make faster progress on that track.” If you don’t like the maps and loot of the path you are currently on, you can just start in a different corner — as long as you found a map piece in game to start you. 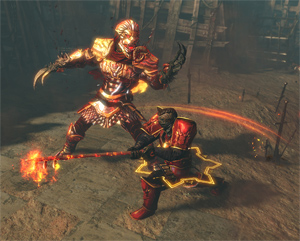 Speaking of loot, you know that an expansion means new goodies. For Atlas of Worlds, devs have taken a slew of base items and added special properties to them then placed them in various areas of the atlas that are themed appropriately. For instance, the bone helmet, which has the special property of adding 31% increased damage to minions, drops in areas that are graveyard related. Players who specialize in minions will then likely want to play on the atlas track that includes those graveyard areas to have a chance of getting that type of loot. This has an added benefit of helping deter players from just rushing to the highest level of maps. “By us putting specific new types of items in specific areas here,” Wilson explained, “there’s a lot of incentive to play parts of the atlas that are actually interesting for you because they drop items you want rather than just being the highest-level areas.

Other loot that players will find are called Shaper’s orbs. These items can be used to upgrade map areas to five levels higher. This will allow players to continue using their favorite maps and still be able to progress by getting better XP and better items in the higher versions. Since not every player will upgrade the same maps let alone unlock the same maps, grouping up can give access to other/higher-level areas than you’d have access to alone. On top of the orbs, there’s also the cartographer’s sextant. When when applied to the atlas, this will grant a specific buff to all maps within a circular area for a total of five runs. These sextants can be applied on top of each other, super buffing particular maps.

While going about getting this new loot, players will be encountering 19 brand-new bosses within the atlas. Players can also expect new boss mechanics and new fights. Wilson said, “We tried hard to make sure that the gimmicks as it were on these bosses are even more interesting and different than what people find in the game normally.” Wilson’s personal favorite is the fire and ice boss in the lava and ice map. It utilizes both fire and ice during the fight, even splits into a separate boss for each element, keeping players on their toes. I actually want to get to end game to see this one in person and not just via video!

Worried that you’ll never make it to endgame to experience this because you just keep starting over in the new leagues? You may still get to try maps sometime. Wilson said, “I suspect the direction that the game is going in the future as we add more content we’ll probably make it more accessible to get to maps for people.”

Unlike the atlas that is at endgame only, the Essence league is a part of the entire game. It has to be, since everyone starts a brand-new character to play in it! The essence of Essence is finding groups of mobs literally frozen in essence in the maps. Players break these mobs free and fight them, collecting that essence that froze them upon defeating them all. What good is an essence? The essence itself is a crafting material that can upgrade your items rarity and add guaranteed properties besides just random ones. There are 25 types of essences, each resulting in a different fight and each giving specific crafting properties. The essences can even be upgraded to make higher-tier essences.

There is another system in this league, which is rare to find. The remnant of corruption item can be used on any bunch of essence-frozen mobs, and doing so can have one of two outcomes. Either the player will get two essences out of a successful fight, or all of the mobs will break out simultaneously (instead of your breaking out each one) and leave you with nothing even upon killing them all. In both cases, the fight will be more difficult.

While not really related to the content of the expansion or the new league, the launch of these two also heralds some performance improvements. “We’ve invested a lot of time and resources into making improvements like multi-threading the game engine so it takes advantage of modern CPUs a lot better,” Wilson explained. “In many cases we are seeing double the frame rate in intense combat situations.” 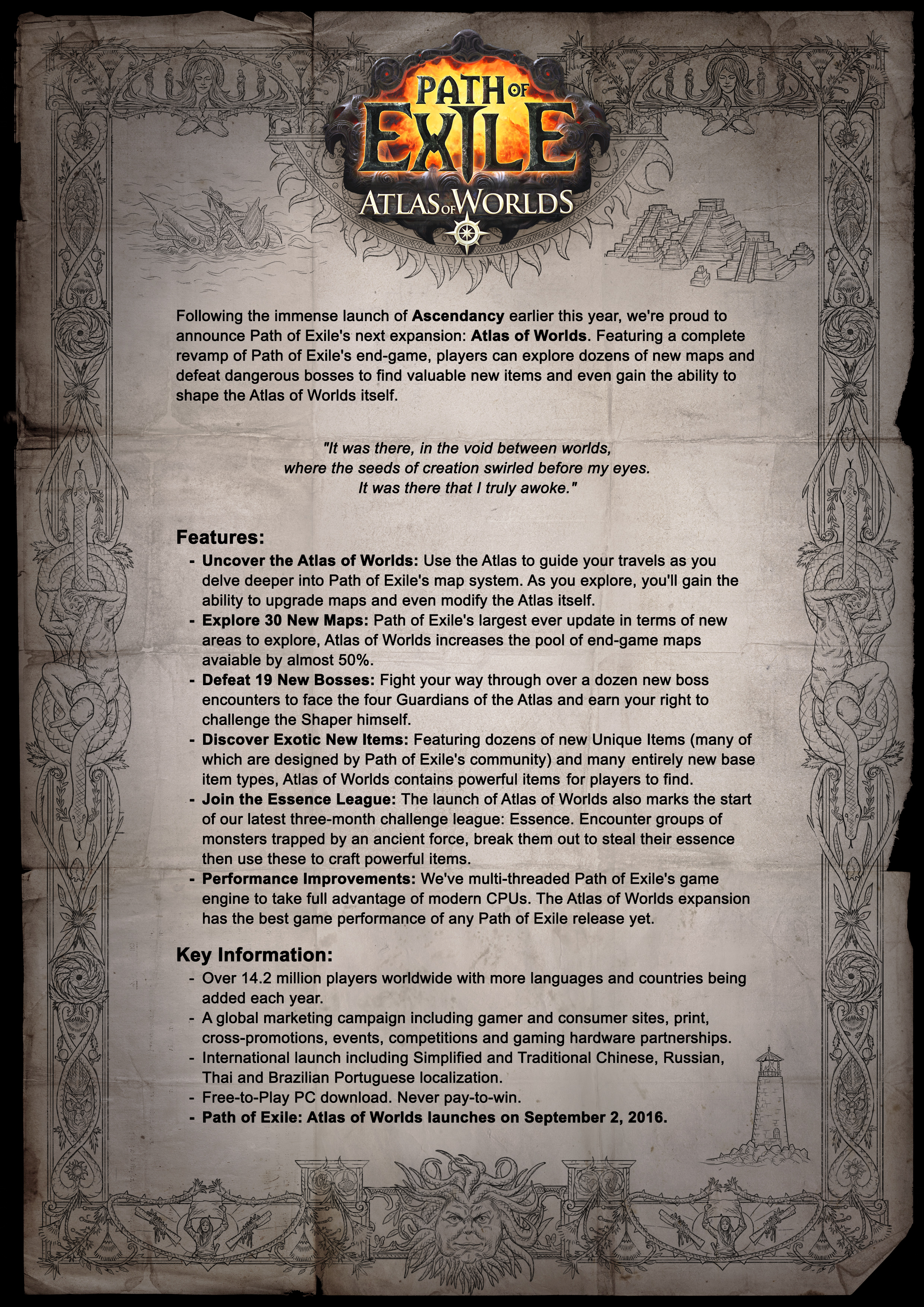