END_OF_DOCUMENT_TOKEN_TO_BE_REPLACED
I’m going to hit you again with some lore this week from Star Wars: The Old Republic. However, I promise that there will be a lot less speculation and a little more factual information because we are going to talk about a character who is reemerging for the bonus Knights of the Fallen Empire chapter Shroud of Memory. Some of you might be thinking that I’m going to talk about HK-55 or the HK series of droids in general, but you’d be wrong. I want to talk about the central figure in my absolute favorite series of quests, the macrobinocular quests: the Shroud.

I have played through every storyline in SWTOR. I have played through every operation and every piece of group content. I’ve downed every boss and even explored some places I was supposed to go. (Ask me about Belsavis on Twitter.) Out of all of those places and questlines, my favorite series of quests is still the Shroud series that released at the same time as first expansion for SWTOR, Rise of the Hutt Cartel. Give me a few moments to explain why this series was my favorite and why I am excited that this character is coming back to SWTOR.

For those who’ve not played through the macrobinocular questline, I will not spoil it. Promise. Continue reading. 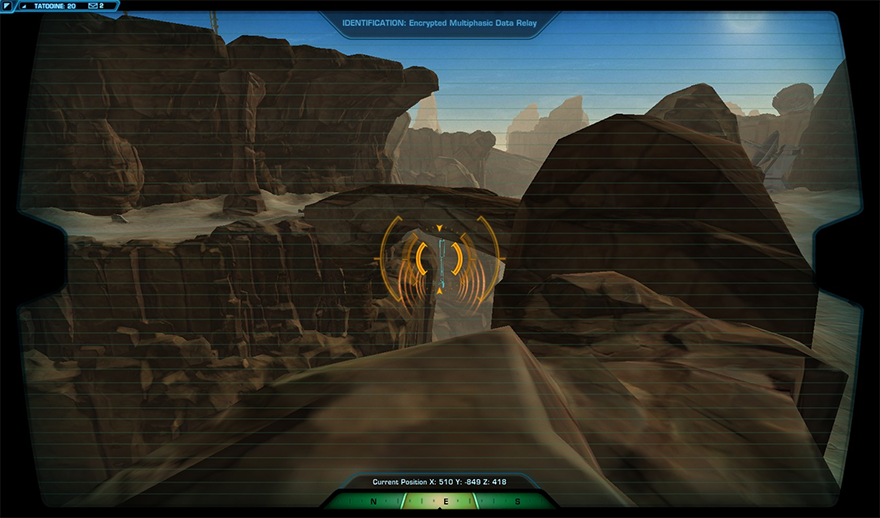 The character and his creator

The Shroud was created by one of the original writers of SWTOR, Hall Hood. He wrote some of the Jedi Knight storyline but is probably best known for creating the vast majority of the hilarious banter of the Smuggler class storyline. I’ve mentioned on many occasions that the Smuggler storyline contains a serviceable if not generic plotline, but it’s the dialogue and amazingly over-the-top characters and personalities really sell the Smuggler storyline as one of my favorites. If you’ve not played a male smuggler on Tatooine, you should; it’s really a treat, especially if you flirt with everyone you can. I won’t get into the details of what happens, but it was honestly my most memorable experience from beta.

The Shroud story followed this same kind of over-the-top imagineering that was a bit of a departure from some of the other more serious stories in SWTOR. The Shroud is a kind of megalomaniac character who wasn’t interested in taking over the galaxy but was more interested in proving his power by playing games with the Empire and the Republic. One of his lieutenants, Evie Bo is quoted at the top of his Wookieepedia page. “Morality, petty emotional stuff — that don’t enter into it. Can he do it and can he get away with it? That’s what matters to him.” That sums up the character fairly well. The Shroud believes that he is not only smarter than everyone else in the galaxy but better than everyone else because of it.

If you’re familiar with the DC and Marvel comic book universes, I would say that the Shroud is kind of a combination of three semi-famous characters: Mojo from X-men, Mister Mxyzptlk from Superman and Super Friends, and the Beyonder from Secret Wars. I’m not sure if Hood had these characters in mind when creating the Shroud, but there is one thread that binds all four of these characters together: playing games. They all liked to tease the players in their games. The Shroud has this cyberpunk feel like Mojo, the flamboyancy and a bit of the gullibility of Mister Mxyzptlk, and the omnipotence of the Beyonder. 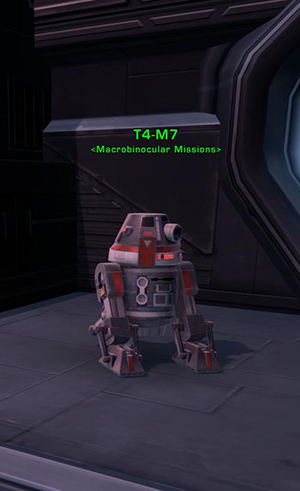 Although the character was great and the writing for the questline was fun to listen to, the best part about the series was actually what you had to do to complete the quests themselves. Right off the bat, you are told that the Shroud has placed listening towers on some major planets and that you can discover these towers by searching them out with a set of macrobinoculars. These towers would reveal the Shroud’s base on that planet.

The weakest part of the questline is these towers. They are not that hard to find and end up being more of a time-consuming element of the gameplay than a challenging part of the mission. However, the bases on each of the planets turn out to be more of a challenge. In fact, they all require a little bit of thinking and proper timing to complete. All but the last base can be soloed, but it’s a lot more fun to work out the puzzles with your friends.

Although it’s highly appealing to me, the part that probably makes the Shroud questline less appealing to the general playerbase is the final instance, which requires four people to complete. And it really does require four people to complete; there isn’t a way to cheese it like some of the other four-man instances. That being said, I still really enjoy it. In fact, I prefer the Shroud four-man over any other four-man in the game because I’m actually having to think and discover instead of just trying to get the other guy’s health to go down faster than mine.

I’m sorry that only those who have been subscribed for the entirety of KOTFE will gain the new chapter, but I am looking forward to it. I’ll get to play the game as HK-55, which is a departure in and of itself, but I am also facing the Shroud again. If the past Shroud quests were any indication of what’s in store for this next chapter, then I cannot wait. Hall Hood has been tweeting about this chapter over the last week or so. He even said, “This may be my favorite thing I’ve written.”

The Shroud of Memory chapter drops on September 7th for those who have been subscribed to SWTOR all this year. And I hope that you don’t miss out on it. And if you’ve not played through the macrobinocular questline yet, hop to the fleet and talk to T4-M7 if you’re Imperial or M3-8Z on the Republic side. These droids start the questline, which should put you in the mood to hop into the HK-55 chapter when it releases next Wednesday.

On an unrelated side note, I was on the Passionately Casual podcast this week. I had a fun time talking to those three passionate SWTOR players. I recommend that you listen to not only that episode but many of other great episodes they have released over the last year!