There’s so much to see and do at DragonCon that you can’t possibly fit it all in. With actors, authors, game developers, cosplayers, and fans in panels, costume contests, balls, readings and more at every turn, you have to prioritize your time. Up in the top bracket of my “must do” list was sitting down (in a quiet place) with Mark Jacobs and talking all things Camelot Unchained. Unlike a game update, the conversation flowed across a number of topics, including Jacob’s view on trolls, hiring more devs, payment models, and how his life almost didn’t go the game developer route. Oh, and we also talked about Camelot Unchained! 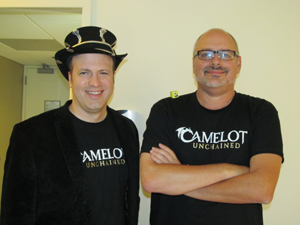 The trouble with trolls

Tribbles may be troublesome, but at least they are cute — unlike trolls that plague the gaming industry. The first part of our conversation focused on trolls and how they are adversely affecting the genre. To be clear, we aren’t referring to folks who call devs out for mistakes. “When we screw up as developers,” Jacobs said, “we should be called to the carpet. When we lie, we should be held accountable. But crossing the line to threats of violence, to harassment, that’s not holding us accountable. That’s not reasonable. All that does in the end of the day is hurt all of us who are gamers… There’s a real place on the internet for commentary — honest commentary. And sometimes even what would be perceived as negative attacks.”

But when the stuff is undeserved or way over the top (death threats, bomb threats — both of which Jacobs has endured)? “It’s unconscionable,” he says. “When devs are driven away, and when good people are afraid to post because they are afraid to be shouted down, nobody wins.” You’ve seen it: Trolls make an inhospitable environment for devs to be open and communicate with gamers. Some devs are even chased away, not just from communication but from the field. Everyone loses.

Is there a cure for trolls? Jacobs noted that while trolls have been around since the beginning, back then there were fewer because folks had to pay by the hour for their trolling time. If only we could return to financial penalties for trolls! “Sadly that’s not going to happen,” he said. “But frankly it should.” With so much potential in the industry, he hopes things improve on the coming years because there is so much good that comes from online games that people don’t talk about; the internet and games connect people and can even be a lifeline. One thing Jacobs likes to do is take the spotlight off and shining it on those who are doing good things. He said the world needs to see more of the good that is going on.

Camelot Unchained fans who have bought into (literally or not) the vision of the game can count on this fact: The game will never be free-to-play. Jacobs said point blank, “There is zero chance of going free-to-play.” In fact, he takes his comment further by saying he’d shut the game down before he’d make it free-to-play. Jacobs simply doesn’t believe in that payment model. There will be free trials to sample the game in the future, but definitely no move to F2P.

Not cashing in with free-to-play also is like a sign of respect to players; CSE thinks of them as players, not walking wallets. Jacobs feels the best payment models are buy-to-play or subscriptions — have the devs provide great content and have the players just pay without worrying about being nickle-and-dimed on everything. “It is the model I have always believed in,” he explained, “not just because it can be a successful one but because it is the most honest one.” He continued, “We’re not trying to find ways to take more money out of your pocket.” Why spend so much time and effort trying to monetize when you could be more devoted to making the game great? He also doesn’t believe that the F2P model is sustainable long-term.

“I think when we devalue our contributions to society to the point of saying, ‘You’re sweat equity, the amount of time and energy you’re team put into a game is not worth me paying for,’ then what kind of a message are we sending?

Can you imagine going to a restaurant and saying, ‘Wow, that was a delicious dinner. But you know what? I don’t feel like paying for it, so why don’t you charge the guy next to me twice.’ That’s not right.”

That’s Jacobs problem with F2P: So much time, energy, and talent goes into a game and people saying they don’t want to pay for it even though they are playing and enjoying it just isn’t right in his opinion. People’s work should be valued. There are plenty who agree with that sentiment!

While all of this relates to the game in various ways, what about the game itself? Don’t worry; we also talked about where Camelot Unchained is now and where it is going.  Here’s a run down.

The dev team has doubled in size since the beginning of the project, jumping from 13 to 26. That means faster and more game development! Jacobs is currently in the middle of the hiring process and hopes to add two more members to the team shortly.

The team is close to having 1000 testers playing together in one space with really good performance, which is Jacobs’ minimum to qualify as a large-scale battle. His favorite part of development on the technical side came when the team was recently able to get 800 backers and bots (which are full clients of the game, not just single NPC) running around and everything worked great.

The game’s graphics are definitely improving. Even given how far the game has come now, Jacobs says that six months from now people won’t recognize the game they played in the pre-alpha tests. He’s confident that the folks who said the game looked bad then will remark on how much better it looks. Jacobs also said the draw distance is nearly infinite; it is cut off at the end of the island. In time for DragonCon, the team turned a part of the island into fall with leaves of beautiful colors on the trees. In time, more will keep coming, including those leaves falling from the trees during the season.

What’s in the pipeline? Jacobs told me that as soon as they are back in the office devs will begin testing connecting multiple islands. The team has built multiple islands, but they aren’t connected how they need to be. At the same time, the graphics are continuing to get upgrades to improving the look, and the placeholder animations will be replaced with real (and better!) ones. Soon, players will be able to get in and start testing the ability system.

If you are looking forward to a large-scale gathering with developers and fans, you’ll get it — later. There will definitely be a convention at some point, but Jacobs feels it would be a waste of backers’ money to do. “I don’t think we’ve earned the right to do that,” he said. The obligation is to get the game out that the backers are supporting. Then after that is done, a convention will definitely follow.

And what if Mark Jacobs had never made games? Did you know Dark Age of Camelot was this close to never existing? That was actually a possibility! It turns out that Jacobs had the opportunity to go in quite a different direction for an — in his words — “interesting” profession (and that’s all you get to hear about that!), but right then the developer route finally opened up as his first game started to take off. If the timing was just a month off… I think the gaming community is glad he chose the path he did and then chose not to retire after Mythic.

Thanks to Mark Jacobs for his time!