END_OF_DOCUMENT_TOKEN_TO_BE_REPLACED
Community Manager Seraphina “Celestrata” Brennan was on hand at DragonCon 2016 to show off ArcheAge’s upcoming updates, from the September second anniversary update coming this month to the big 3.0 expansion coming in December. The earlier update may be more known at the moment for the previously announced flashy customizable underwear, but it also introduces an 8-man free-for-all PvP arena and opens up the Auroria zones of Exlock and Sunstone Fields for castle building. ArcheAge 3.0, named Revelation, brings even more to the table, including two new races, six new zones (with tons of housing!), and a way for players to shoot a large energy cannon at the opposing continent.

As ArcheAge celebrates its second anniversary, players will get to celebrate with some new features. For the first time, the Exeloch and Sungold Fields regions in Auroria will be open for conquest and castle building. Unlike the Korean version of the game, however, these regions not only are locked to player nations for ownership but will be available for individual guilds to contest.

Another upcoming features is the new 8-man PvP arena. Unlike what is currently available, this arena is a free-for-all, so while eight will enter, only one will emerge victorious. It will also be open all the time, day in and day out, for players 53 and above to enter. There is no matchmaking, no balancing — anything goes. 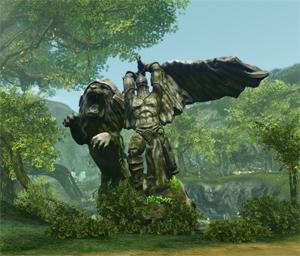 This FFA arena also incorporates spawned mobs that offer buffs as well as match points when defeated; players will have to weigh the risk vs. reward of taking on a difficult PvE monster in the middle of the PvP battle. Oh, and you’d better be able to balance well: Most of the arena is water that will cause you to take 10% extra damage as long as you are in it. Add balancing on the platform while simultaneously trying to shove your opponents in the drink to the challenge of this arena. Some other arena features include disabled chat (to lesson coordinated cooperation between contestants), removal of all player stealth at key points, and the ability for those who respawn in the center of the map to warp to the PvE mobs.

The match will last 12 minutes today, with points accumulating from player kills, mob kills, and even pet kills. Each person participating will receive honor as a reward, with the top-placed winner receiving the most (630) and descending down until the lowest-scoring player (120). Beyond the rankings, players can gain extra honor in each match by completing special achievements: 50 honor for avoiding death, and 100 honor for the most kills.

Brennan also told me that the anniversary update will include a new stat migration system that grants the ability to adjust your base stats. She explained, “You can move points out of unwanted stats and move them into wanted stats.” In total, 300 stat points can be reallocated. To do this, players will need to purchase a migration talisman from the general merchant for 50 gold in order to move five state points. Those who want to move 10 points at a time will need to craft a luminous migration talisman using a boost scroll from an Evenbard and 10 honor badges from one of the PvP arenas. Brennan warns that this will be a slower process than you might think: The cost of the change increases each time you do it in a day, but this counter will reset each day. Those who want to reverse the stat customization can purchase migration scalpels in the marketplace for credits or from the merit store for merit badges.

You didn’t think we’d leave out the underwear, did you? For those who simply must have the best underwear, the customizable underwear will be available. You can also upgrade your underwear with one luna stone; sorry, you cannot grade up to legendary underwear.

Brennan also told me that Revelation, the 3.0 expansion, will launch in December; she shared the story behind this expansion and how it relates to its tagline: “All sins have consequences.” The story revolves around one member of the ill-fated library expedition in the past, Orchidna. She was a child cursed to sit on a throne in the garden in the center of the world for all eternity. There was a promise to return and help her, but the demon voices whispered constantly that she was abandoned, and she had to sit helplessly throughout time watching everything unfold but never being able to leave. Now, Orchidna has re-awoken, and she’s much, much older, significantly crazy, and quite angry and thirsty for revenge. Orchidna is consequence of that long-ago expedition.

Unlike the current races that have specialties, these two races have transformations; the Warborn’s is melee-based and the Dwarves’ are ranged. Brennan demonstrated these two forms, showing off their alternate looks and the impressive skills. The martial finesse of the Warborn is cool, but I was personally taken with the Dwarven mechanical juggernaut with its guns.

Want to try the new races? Brennan reminded me that there is no possible way to race change, so no one will be able to transform a current high-level character into one of the new races. All players wanting the new races will have to start a new character from scratch. This, however, would be a great way to see the new zones, as the six new regions correspond with the new races.

The new areas are basically starting and housing zones: three on Nuia for the Dwarves, and three on Haranya for the Warborn. As such, these zones will all be peaceful. The areas have a different feel to them to match the races. For instance, the Dwarven starting area is more industrial and even has large train tracks. Will there be an accompanying train instead of the NPC wagons for transportation? That’s unknown, but it would be fun, and looks good regardless. As for housing, those who are interested in being landowners or who need larger spaces for their buildings will enjoy the two new epic housing zones that are practically nothing but housing areas. (Fun fact: The housing zone on Nuia is actually where the Daru are from.)

Since some players will be starting over as Warborn or Dwarves, it makes sense that they have the chance to start completely fresh. ArcheAge will launch two new fresh-start servers, one for NA and one for EU, when the expansion and new races begin. There’s one big difference with these servers over the last batch, however: All joining there must be on a totally new and fresh account! There’s no way to twink your new toons with cash, land, or items from your alts because you cannot use your established account.

Revelation isn’t only about the races. Another feature will be the abyssal skill line. Brennan explained, “These are going to be brand-new trait additions to one of your existing [skill] trees. So abyssal will attack to, say your archery for example, to create abyssal archery.” These must be ranked up separately from the existing skill tree and will add in brand-new passives and actives at the end of the tree that you can choose. Players will get to unlock abyssal skills via a quest. To use these skills, players will have to build up a new resource, abyssal energy.

Brennan noted that the last few updates have focused more on larger group play (like hero system and player nations), and 3.0 has more stuff for smaller group play. Family groups received some attention: They will have special economy-based buffs the leader can assign (such as increased hauler speed), customized roles, and daily quests. Family members can also do daily quests centered on new community centers that will be present in every zone to earn tokens, as will those who own land there. The community centers will rank up as people do quests there, and when they rank they will have new resources and tradepacks available. As those tradepacks are sold around the world, money funnels into the community center, and the families and landowners there will receive kickbacks weekly.

One really fun aspect of the community centers is the giant cannon mounted on the top of the Ynestere and Cinderstone Moor ones. Once these centers are ranked up by the community to level three, the next person going in will be invited to shoot this cannon at any community center on the opposing continent. Striking that center will knock all of its progress and demote the center back down to one, forcing that community to start ranking it up again from scratch. Think of this as a new kind of economic PvP!

We’d like to thank Sera Brennan for speaking with us. Many years ago, she worked for Massively-that-was, and we’re proud to see her career flourish.
Advertisement