Do you know that feeling when you come across a game that has most, if not all, of your dream features — even the farfetched ones that you’d abandoned hope of ever actually being in a game? Probably not. But after talking with Richard Garriott at DragonCon 2016 about Shroud of the Avatar, I think I am experiencing an inkling of that very feeling! Granted, the game is not complete yet (although there are no more wipes), but each time I have sat down to speak with Garriott, not only does he highlight more features that make my mouth water, but the game has actively implemented previously revealed features. I can’t help but hope this sandbox will be The One for me.

What are these features that have me excited? And when can we expect the game’s “real” release? Between the various panels and our interview, I came away with a plenty of information on SOTA.

These are a few of my favorite things

So why is it that I am gaining in giddiness for this game? It has to do with the non-combat sandbox features that Garriott talked about; it’s about having the tools to make adventures, stories, and life in a virtual world. SOTA is based on all of that. “We’re trying to turn over as much of the creativity and the reason for success back to the community,” Garriott told me. “I sincerely believe that we are going to deliver you a [story] plot that we are working on that will be great. I believe it deeply.” However, that doesn’t diminish the need to focus on tools for player creativity. As he put it, “We very quickly realized that our mission as a team is to give you all the tools you need to tell these stories in more and more powerful ways.” And the team is delivering.

In a past conversation at E3 2014, Garriott and Starr Long emphasized immersion while describing features like player-written books, player cities, and using player-created items as mob loot. Those cities are now in game, the books are in game (I’ve stopped and read a few on stream!), and with no more wipes, the team is close to implementing the use of player-crafted items as mob loot. Fast forward to E3 2015, where Garriott described public cache boxes for facilitating player-run events (which are in game now). At the time, Garriott and Long let slip the information that decorative spawners would allow players to add mob encounters to their builds and events. That catches us up to now, when Garriott announced at DragonCon that those deco spawners are only a month or two away from being released in game! Garriott noted that as for what will be available as spawners, Portalarium wants to ultimately get in everything from the game. The key is fitting the harvesting of the item in and figuring out what the physical manifestation of the spawner is, such as a skull of a powerful lich or eggs from a spider.

It doesn’t end there. Garriott noted that players can currently make notes and books, and eventually they will be able to put words in the mouths of NPCs in order to weave clues and adventures together for other players to experience. You make your mark on the world by creating playable experiences; you’ll position traps, treasure, and monsters. (You also leave your mark on tangible items via the maker’s mark on equipment, the author’s mark on books, and artist’s mark on paintings — if paintings make it in-game.) This is a good chunk of what I want in a virtual world: to be a real part of the world. 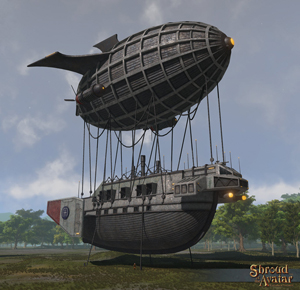 But when it comes to dream features, I want even more. Something I have always wanted in a game was the ability to put separate permissions on different doors within my house. This way, I could run an honest-to-goodness tavern and inn. And guess what? Garriott shared. “We’re developing technology where people can rent out spaces within spaces.” That’s music to my ears! Doors will indeed have that feature, so I could rent out rooms to others. Between this and the ability to offer plenty of player-made food and beverages thanks to cooking, I finally have the opportunity to run an economic establishment/empire that I have really wanted in a vast virtual game world. Add to that the fact I can also write and collect books to make a library, and I am in MMORPG heaven.

On the other hand, I am not much of a PvPer, so how could I be so excited for a game with PvP? Simply put, it’s because of the way PvP is approached in this game. One, Garriott emphasized that the team is very much watching for patterns of the game turning into predators vs. prey and will take measures to fix that. “If that becomes the pattern, I assure you we will stop it,” he declared. Two, as it stands, players can opt out of PvP in pretty much every zone by playing it in solo offline mode. However, Garriott told me that the belief in-house now is that this shouldn’t be allowed when it comes to the main PvP areas that have the highest concentration of the best resources; the studio believes it takes away from the game for all players.

What do players risk by going into this PvP zone? Currently, a PvE-marked player would be forced into PvP, but if she were killed, she’s lose only two items that would be held by the bank for ransom for an allotted time. If the player ransoms her stuff, the cost of which is twice the market value of the items, the PvP victor gets the coin. If the defeated opts to take the loss, the victor gets the items to do with as he please. (Note: Nothing bound or purchased with real money can be ransomed.) Doesn’t sound too punishing while still allowing for the feeling of risk vs. reward, right? And there is always the option of sneaking in at non-peak times or hiring others to protect you or to go get resources for you to try and avoid that fate.

But what about those folks who are eagerly looking for PvP? They want more risk, and that should be met with more reward. At DragonCon, SOTA players (already known for contributing to the game with such things as the soundtrack and the in-game radio) requested a slight modification in this feature: When two folks who are flagged PvP full loot fight each other, the game ransoms most/all items instead of just two. More risk, more reward. Of course, for those PvEers who were forced into PvP for the zone, their penalty remains just the two items. Another aspect of this suggestion is that all loot and stuff gathered from the zone must be physically walked out of the zone; if you die, you lose it, and if you teleport or log off, you lose it. That’s not to say this will happen, but it could; Garriott really liked the idea, but he had to take the idea back to the team first to discuss.

On the subject of other community requests brought up at the con, folks asked for a couple more things. One, the ability to form alliances (for chat, MOTD, etc), and two, the ability to place more decorations in a city. Garriott noted that more decoration placements were already incoming and asked for a list of items players wanted to have that function. He also asked fans to prepare a design document detailing what all an alliance would entail (permissions, the structure in relation to towns, guilds, etc.) and submit for the team to look at and implement.

Launch of Episode I

So when will we get all of this? Garriott noted that it will not launch by the end of the year as hoped but will probably be in the first quarter of 2017. That said, people need to realize that everything won’t be delivered at that time. What it does encompass is all skills, the weather system (which will affect crops), and the story. Right now, Garriott says that “all of the major subsystems of the game exist but some of them are thin.” Some systems — like fishing, crafting, and the story — need to be filled out. But he emphasized that development is not stopping at episode one; things that will come in future include ships, mounts, and hot air balloons. One of the main reasons it is still in development is because it has expanded in tune with the desires of the community itself.

How big with the world be? Garriott said it is gigantic: “There are parts of the game that I still I have not seen. There are probably parts of the game that I will never see… because it is so, so large.” Garriott also notes that he estimates it will take regular players hundreds — yes , plural — of hours to get through the entire story if they do all the sub quests.

Thanks very much to Richard Garriott for his time!