It hasn’t taken me long to fall in love with One Tamriel. This Elder Scrolls Online team has a distinct understanding of what makes this game an Elder Scrolls game, and One Tamriel really captures this understanding. I cannot wait to tell you about my experience in it so far. However, there are a couple of pieces of information that you’ll need to understand my perspective.

One Tamriel is ESO’s way of fast-tracking the leveling experience. Many MMOs create ways for its experienced players to game with the newer players: Some, like World of Warcraft, will do it with character boosters, and others, like Marvel Heroes, will do it with level-scaling. Still others will do it with both, like Star Wars: The Old Republic did. Elder Scrolls Online chose leveling-scaling to an extreme. As a new player in the One Tamriel update, you can literally go anywhere once you’ve passed the tutorial. I’ll get into more details in a bit.

I know that I’ve said this before, but I believe that to understand where I’m coming from I should reiterate that I play ESO solo for the most part. It’s not that I think that multiplayer is bad in the game; I just like to experience this particular game at my own pace and in my own way.

Many PC players of ESO jumped into beta or the game right after release and quickly felt the tunnel of the gameplay close in on them. The story led the player on a very specific path, and even after the Coldharbour prison, the next zone was very much closed off despite having a slightly branching storyline. The Aldmeri Dominion appeared to have the least closed off area because of the scale of the starting zones. The other two alliances set you on an island right after the prison. In the case of the Daggerfall Covenant, there were actually two closed-off islands. Our editor-in-chief Bree even expressed her frustration with this during our livestream of the Dark Brotherhood. I believe the quote was, “I’m tired of seeing Orc faces.”

With One Tamriel, nearly the whole continent of Tamriel is open to you. You can literally go anywhere your feet can take you. As an explorer type MMO player, I am in love with this kind of gameplay. I like being able to go wherever I want as soon as the game starts. I don’t even think that Skyrim or Morrowind can compare to the expanse of this game. If we graded the Elder Scrolls games solely based on how big the world feels, Elder Scrolls Online would win hands down. However, there are some caveats. 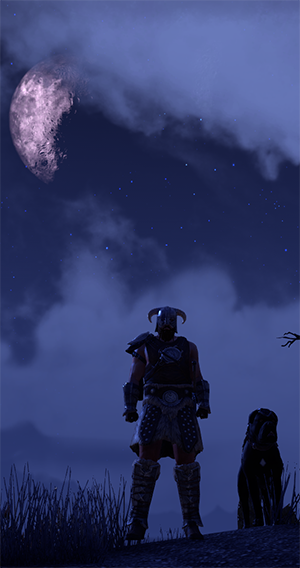 I’m not a new player. I’ve been in the game since its early beta, but if I were a new player, I might still feel as if I’m funneled into specific zones based on my level because options for travelling between zones aren’t made obvious. If you’ve purchased one or all of the DLC, then you’ll be able to see the wayshrines on your map for those particular zones, but the other zones, the ones in the vanilla game, might feel closed off to you unless you know how to get there.

Each of the starting zones, after Coldharbour, has a travel point to the mainland. For instance, if you roll an Ebonheart Pact character, you will be dropped off on Bleakrock. Of course, if you start talking to NPCs there, you’ll be guided down that storyline. But if you ignore that NPC — which you’ve been welcome to do for quite some time now — you can travel to the wayshrine, then travel to Davon’s Watch if you like. Or the simpler solution is to grab a boat with is in the harbor right next to where you start, but grabbing a boat isn’t the most apparent way to travel, although it’s the most logical. In fact, you can travel by boat to all the other major locations in Tamriel, even to the other factions’ starting cities.

Or you can do what I did: Point your horse in one direction and keep riding until you can’t ride anymore.

I have not played in the Ebonheart Pact since beta. Even on my max-level characters, I didn’t go to the Ebonheart Pact zones because I was highly opposed to veteran ranks. When I made my Nord character on the public test server, I wanted to see Skyrim. So I pointed my mount, which was a bear, in the direction of Windhelm and rode.

When the game was in beta, I did the same thing with a friend, just to see if we could do it. This time I did it solo. When I did it the last time, I was not on a max-level character, but he was on a higher-level character, one that had already made it to Windhelm. This time my character had literally just stepped out of Coldharbour. (Full disclosure: I did not make it to Windhelm without dying. However, that was not a design flaw; it was user error.)

At Fort Virak, there is a handful of elite NPCs guarding the door, and I mistakenly thought that the only way to travel from Stonefalls to the Rift was through Fort Virak. This is only partially true. You can travel around the Fort, under the bridge, and up the other side without running into any elite mobs.

Mobs are still tough but not too tough

I did fight my way up to the elite mobs at the gates of Fort Virak with my level-three character and probably could have bested him had I not mistakenly rolled into another group of mobs in front of the gate. But that wasn’t really enough to test my skills as a newbie. The question still remained if I could actually go anywhere and do anything that I wanted.

Elite mobs were difficult, as they should be, but surprisingly, the quest chain in Lower Yorgrim could be completed in a reasonable fashion. I don’t want to say that it was easy because I had to maneuver around giants that could readily kill me in my less-than-optimal gear, but the wolf packs and other quest mobs were easy enough to take down.

I’m going to spend the next week or two trying different things in One Tamriel, but at this point, I’m sold. I would recommend our readers to try this out if they like Elder Scrolls or they like non-linear progression.