END_OF_DOCUMENT_TOKEN_TO_BE_REPLACED
Hamsters yeah! To celebrate this week’s announcement that there are two million people playing Neverwinter on the PlayStation 4, PWE has granted Massively OP PS4 30-day VIP keys and Miniature Giant Hamster minipet keys to give away to our readers — 10 readers will get both, and another 50 will get their very own Boo with a nifty regen buff.

The VIP keys include 30 days of a 10% bonus to XP/Glory/Profession XP (excluding some professions, VIP zone access via the Moonstone Mask, a 15% bonus AD on daily quests in Protector’s Enclave, and 10 level-appropriate ID scrolls and daily enchanted keys (one per day on the scrolls and keys if you remember to claim them).

The codes can be redeemed only once per account and do not expire. Critically, these codes are redeemable on PS4 only by players in North American regions Sony Network Entertainment accounts on the PSN, so if you’re a purely PC or Xbone player or not in North America, you can skip this one.

I was not kidding about the hamsters. 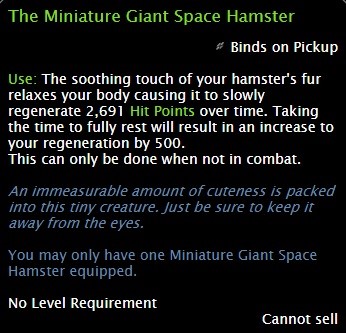 Have fun and good luck, everyone!

Catan: World Explorers is now up for beta in New Zealand

Final Fantasy XIV’s next Live Letter is on July 22

PSA: Warframe will release Inaros Prime to all platforms on July...