What is it like to spend an hour in AdventureQuest 3D with Adam Bohn, aka Artix, the CEO/Founder/Paladin of Artix Entertainment? Pretty darn fun — even if he gets you killed off (twice)! It’s even better when you get to see and experience a brand-new dungeon and hear all about the game’s very first seasonal event post open beta coming in October. I got to sit down and talk with Bohn, who whisked me away for a tour of Shadowskull Tower and regaled me with tales about the history of Mogloween. I fought my way through the dangers of this upcoming dungeon and learned all about the festivities and goodies of the holiday that will start shortly after the dungeon’s release.

If all this sounds very exciting and you are beside yourself with anticipation to play AQ3D but don’t think you can make it until those beta doors swing open in October, we can help. Artix Entertainment gave Massively OP 2000 special treasure chest codes that also grant early access! (They’re all gone now – sorry.) In the meantime, let’s talk about the Shadowskull Tower.

Currently, players can fight their way across the bridge up to the doors of Shadowskull Tower. For the dungeons run, we did just that. (Cue death one.) However, that door into the tower is locked. Luckily for me, devs have a special key, and we were able to slip inside. When beta opens, however, it will be pried open for all to enter. What waits beyond that door is what will be the game’s max-level dungeon that is inhabited by the sinister NecroKnight, whose goal is to turn you into another skeletal minion.

In a kind of surreal moment (for me, since I was standing next to Artix), I watched the cutscene and took the dungeon quest from Artix, albeit a less-live version. As we entered the dungeon, Bohn shared that the requisite dungeon key was something that was more or less being done away with in the game. The keys were initially to combat bots, but removing them is for the players. He explained, “We were using them as a pacer, and primarily to stop bots, because it shouldn’t be possible to beat the timer if you’re a real human. But the players hate it so much that we’re going to get rid of it except in dungeons that have our most rare and valuable restricted loot, which will make it more fair.”

When you first enter the tower, you don’t know where you will start. The dungeon run will always be five rooms, but what you do in which five rooms can vary. That’s because the rooms are randomized; everything from the structure of the room to the encounters to the type of tasks comes from a giant pool of potential room shapes and bosses. The end boss, however, is static, as it’s a story encounter. Sadly, we didn’t get a puzzle room to solve on this trip, nor a crafting room.

While romping through the tower, I was introduced to another fun aspect: newly destructible objects. “They don’t actually give you anything,” Bohn said, “but you can totally break stuff!” I don’t know about you all, but I find wanton destruction is always fun! Another thing Bohn pointed out what that although we were moving through portals to get between rooms for this adventure, portals probably won’t be utilized for other dungeon adventures. Instead, the team wants to make it a more seamless transition between areas, where players walk through from room to room.

In the end, we came to the dastardly main denizen of this dungeon. The NecroKnight, with his flaming skull, is a formidable foe. He doesn’t go down as easily — or rather I should say, doesn’t stay down! When you defeat him, he comes back as one of three random forms to face you again. I can’t wait to see what the other two forms are, so I’ll be diving back into Shadowskull Tower just as soon as I can. 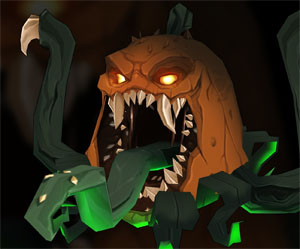 October is my favorite time of the year and has my favorite holiday, so I was excited to learn that AQ3D’s first-ever holiday event will be Halloween-themed. Prepare yourselves for Mogloween! What exactly is Mogloween? Those familiar with the franchise will recognize the inspiration behind the event; it’s a holiday based on an adorable little pet, the moglin (which Bohn has confirmed will be the first pet available in AdventureQuest 3D). But wait, how can such cute little critters be the basis of such a sinister and spooky holiday? For the uninitiated, Bohn clarified: In previous games, it was explained that people wore masks on that one night of the year because those adorable little moglins would turn into giant, hideous monsters and eat anyone who wasn’t wearing a mask. Sounds like a good reason to don a mask!

In AQ3D, Bohn stated, “[Mogloween] will be a good combination of nostalgic and brand-new.” Festivities will include a haunted house (filled with what Bohn described as badly photoshopped secret pictures of a certain movie star), appropriately themed monsters, and even a craftable suit of pumpkin armor. The evil Cauldron Myx, a character folks may recognize from AdventureQuest lore, will inhabit the haunted house, doling out holiday quests to players instead of candy made by the three witch sisters. The boss of the event is the monstrosity Gourdthulu, the Elder Gourd. And players will be able to craft a full set of Pumpkin Lord seasonal armor, perfect for any costume balls.

The future is bright

Once the holiday festivities have concluded, what’s on tap for AQ3D? Bohn shared that he’s “fighting aggressively” to keep AQ3D on a content release schedule that mirrors the other AdventureQuest games. He explained that the other titles have all added new content weekly. In fact, he pointed out that as of right now AdventureQuest has been updated every single week for 14 years. The same goes for Dragon Fable and AdventureQuest Worlds. “Each game has a team that is dedicated to just updating their weekly releases,” he said. And he doesn’t mean just some small piddly token update, either. The updates are substantial. “We’re talking new monsters, areas, maps, cutscenes, features, weapons… you name it.” There’s added difficulty on keeping AQ3D up on such a quick content release schedule, however. “It’s much harder to build content in for the 3-D game than it was for our 2-D games, for obvious reasons,” he noted. It’s even more difficult because of the game’s cross-platform nature: “Sometimes we have to double the work for some of the things we have to do here.”

Mogloween quickly follows the release of Shadowskull Tower, so what will follow Mogloween? Bohn said that shortly after the festival AQ3D will be moving on into the giant dragon-laden volcanic area. Here, the players will have the opportunity to play the Dragon Slayer class and traverse the new zone. But this content won’t all come at once. Bohn explained that first the main story area will be released, and then will come dungeons, then raids, then bonus content. By then, he said the next area should be ready, and they will roll that out. 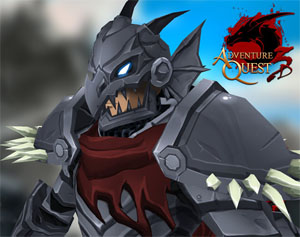 Beyond that, Bohn shared that he has three really big goals for AQ3D. One, he wants it to work seamlessly across all platforms, so you can pick up where you left off regardless of being on your PC or your mobile device. Not only that but players can group with companions regardless of which platform they are playing on. Because the game isn’t open yet, the only way to get the Android client currently is from a link on the official site, but it will become available in the Google store. Bohn explained the game can’t be available on iPhone until it is officially released.

Second, he wants the regularly released content to be really engaging. Basically, there should be something new for players to look forward to each and every week.”This isn’t a game that we expect everyone to spend every ounce of their life playing,” he said. “But you should be able to log in, burst through the release, with something new to look forward to each week. And then there is bonus grinding stuff at the end for those who just really want to play for a while.”

Third, Bohn really wants to have special live dungeon master events. As he put it, “The thing that really gets me out of bed in the mornings, what I am most excited about in gaming, is live events.” Instead of static events for the masses run by NPCs, these would be smaller group-based events run live with actually roleplaying necessary to advance the mission. he described it as sitting down at a table and playing D&D with friends. And there would be special unique rewards for participating in the special adventure. If you aren’t able to get in on one particular event (and there will be those you can’t get in on), there will be plenty of others with their own special rewards to participate in.

Don’t forget to grab an early access key to try it out yourself with our giveaway!