END_OF_DOCUMENT_TOKEN_TO_BE_REPLACED
Balmung, if you are a Final Fantasy XIV, is the mysterious land of milk and honey. Or it’s home. Heaven help you if you’re in the former group, though, because you’re going to be hard-pressed to join the latter.

The Balmung server, aside from having an absolutely horrible name, is also the unofficial RP server for the game. As a result, it’s one of (if not the) most populated servers in the game. When people talk about the problems with the housing system, they’re talking about the situation on Balmung first and foremost. The server has gone from having somewhat restricted hours for allowing character creation to just being closed to new characters pretty much all of the time.

And it’s an odd situation to look at in hindsight, especially as someone who’s been on the server since it was Besaid pre-merging. It’s a situation full of poor communication, some lacking support, and a whole lot of community pressure that produced an enormous server that’s basically inaccessible to everyone else right now.

Back before FFXIV first came out, the official server list was released, and the roleplaying community chose a server to play on: Besaid. This was chosen by the complex and time-honored tradition of “listing all of the servers and voting on one.” Besaid won by a reasonable margin. That was it. There was some distant consideration given to where other communities were heading as unofficial destinations, but it was mostly with a shrug.

Obviously, most of the communities that were not the roleplaying community didn’t stick around for very long in the original version of the game. There’s a reason why we had a relaunch, after all. But all was well; FFXIV‘s roleplaying community continued on, hopped into Balmung with the server transfers, and then prepared to happily continue in the relaunched version with new players and a better game to actually play.

Unfortunately, in the run-up to launch, tragedy struck. Various people wound up floating a couple of ideas about having everyone on Balmung:

This group wanted to have a new server, one untainted by legacy players. Despite the vociferous objections by large parts of the legacy community about splitting the community, the matter was put to a vote, and the community voted to have Gilgamesh designated as a new player-only roleplaying server.

Gilgamesh was also the designated community server for a large portion of the Reddit community and a few other communities. Whether or not this was known during the voting and whether or not this influenced anything is one of those pointlessly circular arguments which you see pop up a lot in insular communities; I don’t think it’s really worth speculating on in any depth. It is what it is, what happened is what happened.

What also happened is that players who actually went to Gilgamesh quickly found that the server culture there was not predisposed toward accepting roleplayers. Balmung has an active population of non-roleplayers and always has, but it’s also got a sufficiently large critical mass that most of the non-roleplayers tacitly accept that this is the nature of the server. That’s not counting the fact that the server also has a lot of well-known players who are also active in the community (a list which would probably include me if I actually made my characters public knowledge), all of which makes the server an environment full of random roleplaying and a fostering environment for same.

Gilgamesh didn’t have that. And so, very quietly, the vast majority of the Gilgamesh roleplaying population – which arguably was never that robust – made its way over to Balmung. As did new roleplayers (Gilgamesh was known to not by much of a roleplaying server early on). As did players who just wanted to be where the action was. As did… well, everyone. 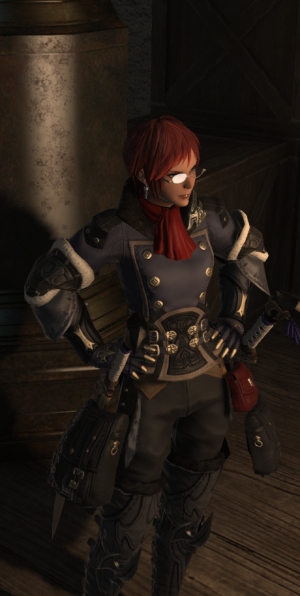 In short, over time we’ve wound up going from two unofficial RP servers to having one unofficial RP server that is also absolutely stuffed to the brim. This is the server that highlights the problems of the housing system, because it is full of players who want houses and spaces for character expression. And it’s kind of a problem.

If you’re on Balmung, you have very little reason to go anywhere else. Not only are you giving up potentially valuable stuff like houses and reputation, you’re also giving up a very large and active community for a server that’s more of an unknown. The server is big enough that you can almost definitely find several groups devoted to whatever you want to do, up to and including PvP. The community is too large for the server, but the size of the community is also seen as a draw by certain players, that the sheer density of roleplayers makes it easy to find new people to interact with.

At the same time, Balmung’s sheer size means that it has problems that other servers don’t have to deal with. The developers have clearly decided against, say, adding extra housing wards to Balmung only; whether that’s prohibitive due to coding or simply seen as unfair is an open mystery, although I’d wager it’s a bit of both. Regardless, it means that “enough” housing for many servers isn’t nearly enough for Balmung.

So, at the end of the day, what can actually be done about this? Simply increasing server capacity on Balmung would help, assuming it could be done for one server and not every server in the game, but even that wouldn’t solve the problem in the longer term. It’s a patch solution to a serious overcrowding issue.

If Square-Enix wants to address this particular problem, the only real way to do so is by spinning off a new server, which is something that the game has thus far been reluctant to do. That reluctance is, in fact, a good thing; I can’t count how many games launched, spun off new servers, then wound up merging servers back down again in a few months when half of the new servers were ghost towns. But players would need serious incentive to move off of Balmung, and there would have to be serious incentive for the large non-roleplaying portion of the server’s population to move shop, much less chunks of the roleplaying population.

Community acknowledgement would also be a great choice. I’m not talking about server rulesets here, just an official tag pointing out that certain servers are ideal if you’re interested in certain content. Designate servers on other data clusters as being ideal for people who like to roleplay and make it easy to transfer servers; Balmung will suffer a bit for the loss, but it’ll plow on ahead just the same.

But all of this presumes that Square sees this as a problem, which is far from certain. From a metrics standpoint, Balmung is an insanely popular server with a huge playerbase. It’s doing what it’s supposed to be doing. So while the community might be more than a little frustrated by how difficult it is to access the server, the team behind the game may very well be looking at it with an appreciative nod.

These character creation restrictions are still a pain, though.

As always, feedback is welcome in the comments down below or via mail to eliot@massivelyop.com. Next week, it’s our usual eve-of-the-patch column!