Superdata’s digital games market report for August 2016 landed in our inbox today. Those of you who’ve been consistently frustrated and confused over the way Superdata bins games might be happy to know that the research firm is now reporting just three categories, but unfortunately, that means most core MMORPGs will be kept off the list entirely and the data are far less interesting to us (and more likely to be more or less static from month to month).

League of Legends, World of Warcraft, and Crossfire continue to dominate in terms of global revenue on the PC side, while Overwatch shows up in the top 10 for both PC and console. No one will be surprised by Pokemon Go’s place at the top of the mobile category. The researchers claim that Overwatch and World of Warcraft “show shifting Chinese spending habits” and note that Chinese players are now paying for WoW subs in monthly chunks.

“NetEase also recently changed their payment policy for World of Warcraft with the rollout of the title’s new Legion expansion. Rather than let Chinese gamers pay by the hour in tiny increments, players are now required to pay upfront for full monthly subscriptions. Despite this, the expansion was very well received in China with NetEase-processed revenue up to $37 million in August compared to $8 million in July. The success of both [WoW and Overwatch] goes against the assumption that Chinese gamers will never warm up to paying for games upfront, and provides evidence that it is possible to convince Chinese consumers to purchase high quality full-priced games. Whether this will fundamentally change the market remains to be seen, as local gaming behemoth and NetEase rival Tencent is still sticking to free-to-play.” 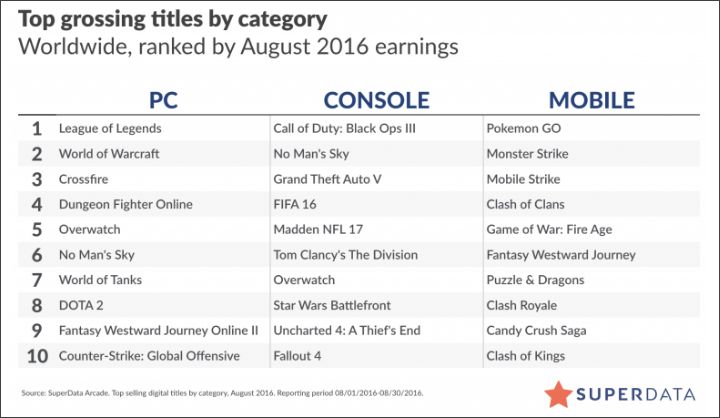 Choose My Adventure: Taking the new Warbird for a spin in Star Trek Online

The Daily Grind: Which MMO is most in need of a major quality-of-life overhaul?

Cthulhu is coming to SMITE in June

Final Fantasy XI brings back the Sunshine Seeker event on May...

Formula E driver gets caught cheating in an esports race after...