END_OF_DOCUMENT_TOKEN_TO_BE_REPLACED
As Massively OP’s SWTOR and Elder Scrolls Online columnist and an unapologetic MMORPG fan, I’m not usually the first person people turn to when looking for an expert on lobby-based PvP games, but that’s exactly what makes me the right person to tackle this impressions piece of Trion’s Atlas Reactor for our MMO audience. I don’t dislike PvP; in fact, I really enjoy PvP in traditional MMOs like RIFT and slightly less traditional MMOs like Guild Wars 2. In the past, I’ve also enjoyed turn-based strategy games like the Master of Orion series. And Atlas Reactor combines all of these gameplay styles in a compelling way.

In April, I gave my initial impressions of the game’s closed beta. Obviously, the overarching game concept hasn’t changed, but there are other interesting changes that have leaked in since then, like new characters, interface changes, and match setup. Let’s first take a look at what Atlas Reactor is, what sets it apart from other games in similar genres, what changes I noticed since April, and ultimately, who should buy this game. 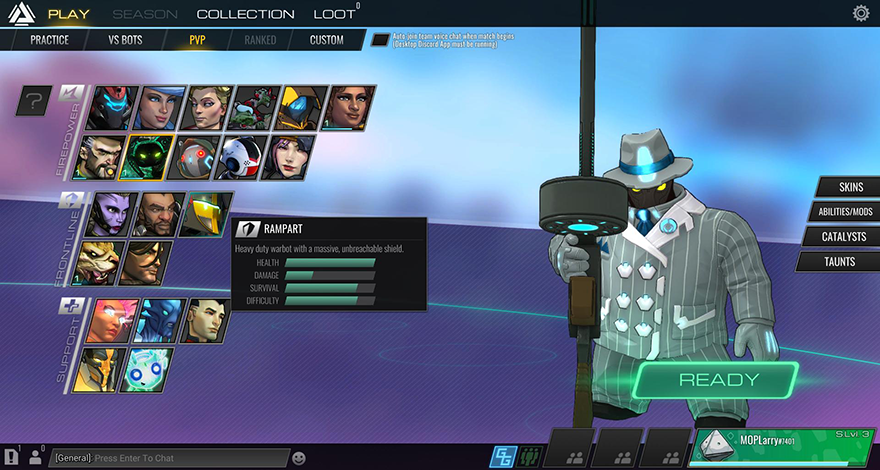 Atlas Reactor, like many games in the lobby-based PvP arena, sets up the conflict with a light and ultimately unimportant story. That said, it also follows in the tropish footsteps of many games since Team Fortress 2 by making its characters fun and over-the-top with distinct personality. Blizzard fans and newbies to the genre might get an Overwatch vibe from the game, but Overwatch was hardly the first game to insert personality into the game by giving the player a cast of characters as well as specific gameplay style to choose from.

Atlas Reactor separates itself by introducing a wildly different core mechanic: simultaneous turn-based combat. Each player controls one character that is part of a team of four. The characters have three basic classes: Firepower (DPS), Frontline (Tank), and Support (Buffs and heals). The team composition is usually composed of one of each class with one more Firepower thrown in for good measure. However, if you group up with your friends, it doesn’t really matter what the composition is. 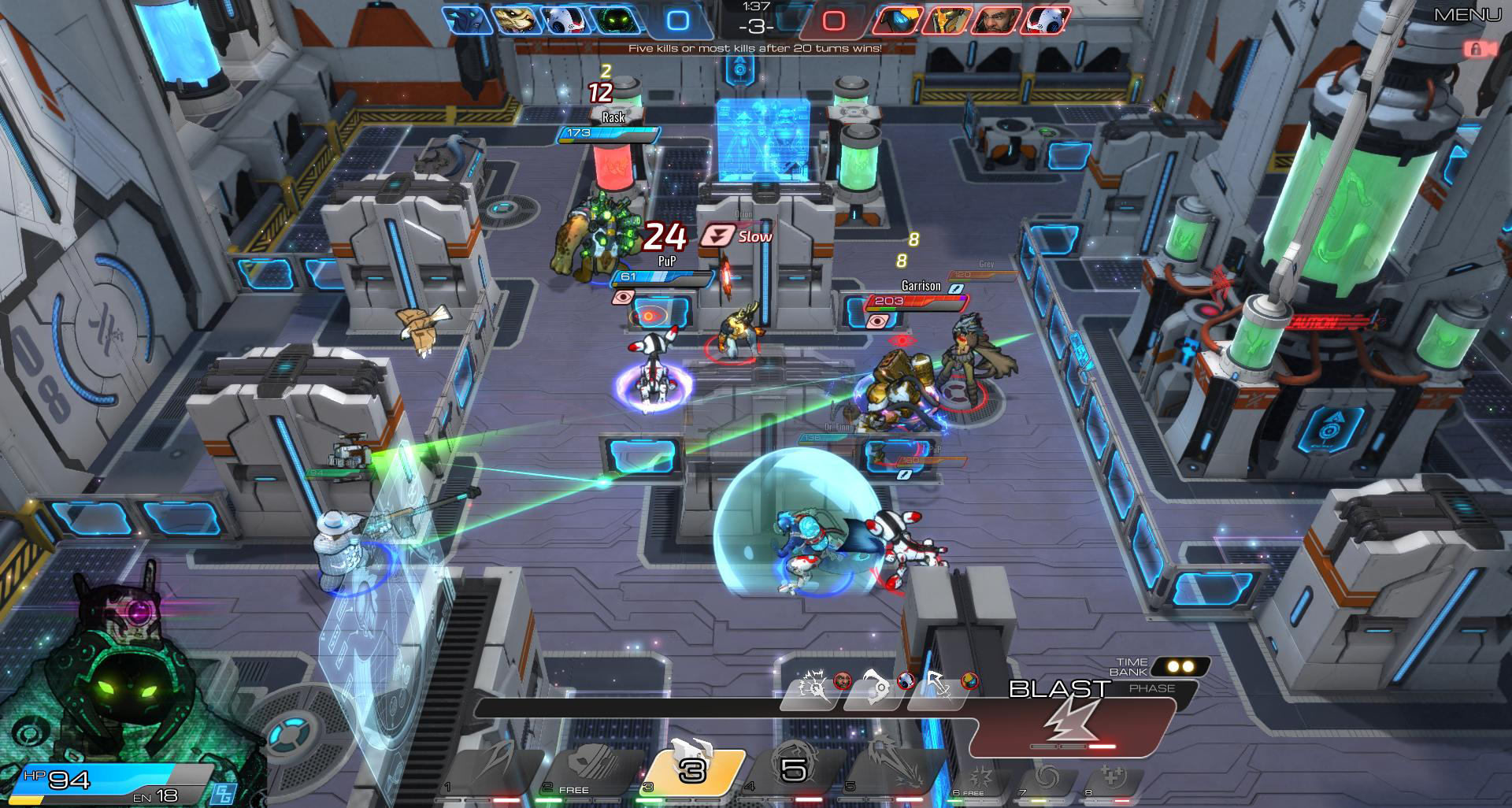 Combat itself is made up of four different phases, with each phase taking place at the same time for every player. The prep phase allows for traps, buffs, and some preemptive damage to start. The dash phase is pretty self-explanatory: It allows for dash abilities to be used. Some dash abilities deal damage, but it’s usually minor. The blast phase is when most of the damage is dealt, but it’s also when a lot of the healing takes place, too. Cinematically, characters will conduct each of the first three phases individually, but as far as the mechanics are concerned, the abilities happen at the same time according to the phase. The fourth and final “move” phase happens cinematically and mechanically at the same time. In other words, everyone moves at once. 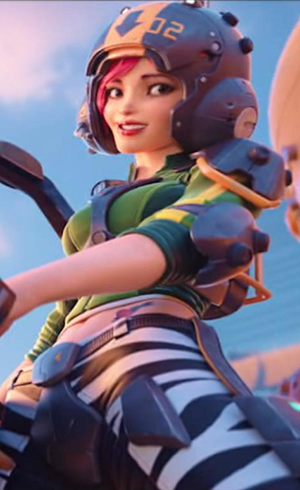 I’ll give examples using two easy-to-understand characters: Lockwood and Rampart. When the match begins, all abilities are automatically placed on a one-turn cooldown, meaning the only thing players can do is move. In this case, they sprint, which means they can move farther because they are not using any other abilities that turn. During the next turn, players have 30 seconds to decide which abilities they want to use. Some abilities, like the damage-boost catalyst, cost nothing, and another ability can be used at the same time. However, Rampart’s “bulwark” prep-phase ability cannot be used with any other ability. Lockwood’s dash-phase ability “back-up plan” allows him to zip away a few meters, avoiding damage that might be pointed at him. But Rampart’s dash-phase ability “Aegis Protocol” causes damage to anyone in his way. Blast phase abilities are the most varied, but for the most part they are designed to cause damage to another player or to heal yourself or your teammates. Lockwood’s “trickshot” allows him to fire a blaster bolt off walls and to hit a single target, but “light’em up” is a cone that hits all targets in the spaces in front of him.

Trion has also added a few new quality of life changes since I played the game in April. For instance, there is a warning for when you are getting close to the end of the timer. There are icons for where your teammates are moving when setting up your turn. The reticles have always appeared on the ground where attacks were going to land, but the icons for the moves make planning ahead easier. There is also Discord integration that will automatically set you in a group with others on your team, if you have that enabled (Trion says it’s this integration is a genre first). And you can also set the interface so that you choose your freelancer after you see what your friends have chosen. Those are the QoL changes that I saw, but I also noticed the studio did fix some of the balance issues with Helios and Rampart, who were both nearly unkillable in April. 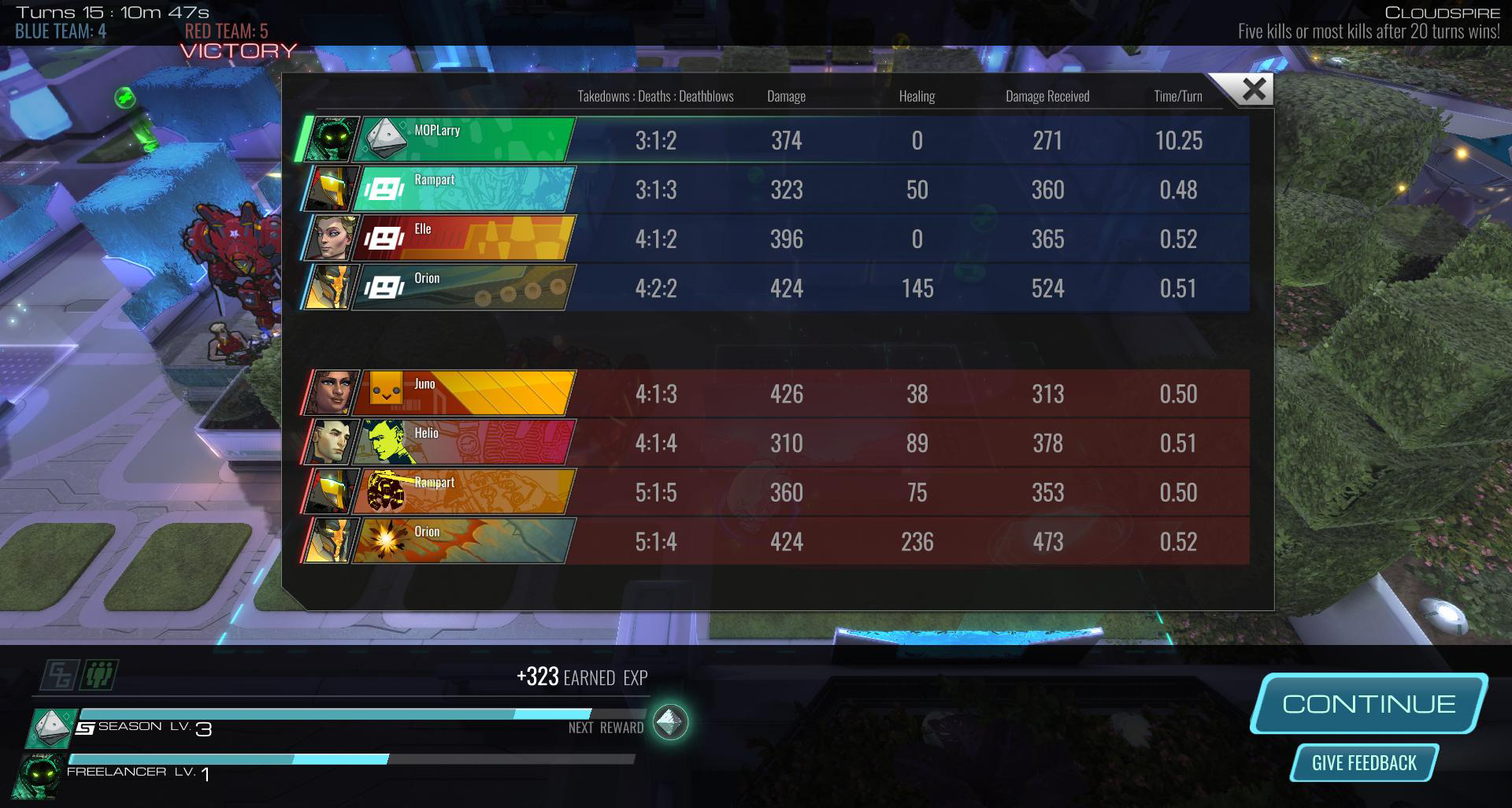 It’s hard to decide who would actually like this game, which isn’t a dig on the quality of the game. Trion has done a fantastic job, and I would certainly recommend this game to anyone who likes innovative games that aren’t afraid to step outside the status quo. Atlas Reactor makes me consider jumping back into the PvP scene. But besides me, I’m not sure who exactly would fall for this game. It doesn’t fit squarely into any one gaming category, and I have to wonder whether that’s not ultimately going to be to its detriment. It will not appeal to those who like twitchy PvP. It won’t necessarily appeal to those who like XCOM kinds of games because you’re controlling only one character, and it’s PvP. Perhaps the overlap of those strange concentric circles is enough to make the game successful.

The bottom line is that I do recommend the game. It’s surprisingly well made, it’s genuinely fun, and it’s inarguably different from standard gaming fare. And those with eclectic tastes in games like mine should give this game a shot.

Whatever happened to Atlas Rogues?

The Soapbox: The sunsetted MMORPGs I miss the most

Gamigo is sunsetting classic Defiance – on the Xbox 360 – next month

Ask Mo: The hits and misses of MassivelyOP’s 2019 predictions

Farewell, Atlas Reactor: Gamigo has officially sunsetted the first of its Trion MMOs

Not So Massively: Mourning the wasted potential of Trion’s Defiance

Trion Worlds has been sold to Gamigo, and yes, there have been more layoffs

All the best MMO sales of Black Friday 2017

PAX West 2017: Atlas Reactor’s next freelancers are a hamster and a dino

Atlas Reactor adds a hula-hooping catgirl to its crazy roster

The MMOs of the Steam Summer 2017 Sale

Massively OP’s Best of 2016 Awards: The Pseudo-MMO of the Year

Cheers to the MMORPG studios supporting Extra Life this weekend

Atlas Reactor opens up free play for everyone

Atlas Reactor opens beta access to all this weekend

Atlas Reactor welcomes one and all this weekend

What to expect from Atlas Reactor’s closed beta launching today

The Stream Team: Another round of Atlas Reactor alpha

Atlas Reactor’s Oz will restore your faith in humanity

PAX Prime 2015: Trion tries turn-based strategy with Atlas Reactor
Massively Overpowered skips scored reviews; they’re outdated in a genre whose games evolve daily. Instead, our veteran reporters immerse themselves in MMOs to present their experiences as hands-on articles, impressions pieces, and previews of games yet to come. First impressions matter, but MMOs change, so why shouldn’t our opinions?
Advertisement