October is finally here. That means Halloween is this month! I can’t even describe how excited that makes me. I know I’m not alone in having been waiting with bated breath for any word about The Secret World’s Samhain holiday event. So when Romain “Titly” Amiel, game director, started teasing chunks of an image, many of us thought it would an announcement about the best Halloween celebration ever. It turns out it wasn’t, but maybe it was. The announcement is related to TSW. However, it might also be a tease for what will actually await us in TSW as well. It’s all about a new Secret World spin-off game.

Can Funcom’s upcoming Halloween title Hide and Shriek top last year’s The Park? Does it even need to? And what will it have to do with The Secret World? If these questions are floating around in your head, you’ve come to the right place for answers. They are:

OK, so maybe you’d like a few more details than that. Can do! Of course, we mainly have speculation at the point, but following the path that the past has laid out brings us to these very answers.

Will second be first?

Hide and Shriek will be Funcom’s second spin-off of the horror and conspiracy-laden Secret World. Can this year’s installment best last year’s? It can. Will it? I can only answer that personally after I have actually played it. However, I do think it has a few things going for it. One, it does have a very beloved location. In fact, whenever talk about more single-player experiences was discussed, this location is one that is brought up all the time: Innsmouth Academy. Joel Bylos himself even brought the possibility up in our tour. So reading that first introduction on the Steam page is music to the ears:

“It’s Halloween and the students of magic at Little Springs High and Innsmouth Academy are about to honor an ancient tradition: sneaking into school after midnight, turning themselves invisible, and scaring the living hell out of each other!”

You can’t say the devs weren’t listening! I am really excited to be able to delve deeper into this institution of  learning. I am hoping that the school grounds are used in the game, with new places we can get to and explore. If not, and if the only location in the game is the new (possibly rival) high school Little Springs High, I will be OK as long as there are plenty of story bits that shed more light on the history and goings on of the Academy. Also, I want to see a build up of a high school rivalry!

The second reason i think the game can top last year’s is that it looks to have better replayability. The Park is an awesome experience, but the impact of that experience is a one-time deal. Hide and Shriek, on the other hand, is a 1v1 match against another person. That means that the development of the experience will be different each time you play. As much as I loved The Park, I have not logged back into it since that initial playthrough last Halloween. That’s because the “unknown” factor has been removed. I do plan on going back in this month because I want to see how it does after a year break. But no matter what, I already know the outcome. With Hide and Shriek, the outcome is unknown each time you log in, and the path used to get to that outcome will be different. Therefore, the game should be something folks can dive into more than once, and likely for a longer overall time than a playthrough of The Park.

I’ve been pretty vocal about the fact that the devs have managed to outdo themselves with every new Halloween event, and they have set a precedent to continue to do so. Each year I wonder how the studio is going to top the last, and yet it does. So will Hide and Shriek top The Park? It doesn’t have to; it’s a different kind of beast altogether.

Part of the reason I think that the new offerings “top” the previous ones is that devs come up with something very new. It’s not necessarily that it is better, but it is very different and new. The Samhain event is not a rehash of the same thing with a slightly different spin or different rewards; each set of missions is very different from the others. The mission of tracking down the cat god is not like the mini missions of putting together Danny’s spooky stories book. And listening to old-time radio stories is way different than both of those! having a new experience is what is better. That doesn’t diminish the coolness of the previous events. In fact, having them all be so unique ensures folks are eager to repeat all the Halloween events every year, dding more content to the season. If the event were just a rehash of the same old, same old, there wouldn’t be as much enthusiasm for completing it.

As for topping it The Park in player interest and sales, I certainly hope it does! I am all for more people supporting Funcom financially. Doing so makes continued content for TSW that much more likely. And more spin-offs are also great in that they continue to flesh out the lore and history of The Secret World, something I can never get enough of. 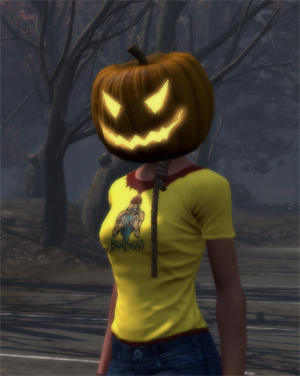 What does this mean for The Secret World?

Some folks were pretty disappointed that the announcement wasn’t actually about TSW’s Halloween event. However, I propose that it likely was. Remember how last year’s Halloween spin-off was tied to TSW through the Samhain holiday event? I’m willing to bet that will be the case this year as well. If it isn’t, I think players will riot! And Funcom definitely knows this. After all, many TSW fans would love to see more content involving that infamous Academy. More lore and history, more student involvement, more students and teachers… just give us more. Devs set a precedent by tying the two together last year, and I can’t imagine that they aren’t cognizant of this fact. And I think it turned out spectacularly. So why mess with success? That’s why I believe and am totally excited that the Halloween event may be centered around Innsmouth.

So where is this gosh darn event? We are all obviously really looking forward to it! Like last year I don’t think the event will start until Hide and Shriek is released, if not slightly after. This way, TSW won’t spoil anything in the spin-off and the spin-off can contain clues and tidbits that will deepen the TSW experience.

On a different note, you might also recall that The Park offered a special TSW bonus for folks who purchased that single-player spin-off. There was a bit of a brouhaha over that necklace, in fact. Personally, I don’t mind that people could support continued development and content for Funcom that directly benefits The Secret World. I support doing so! So I am all for giving people in-game goodies for purchasing a spin-off.

That said, I think it would be better to steer away from gear stuff to avoid the troubles from last time. A cosmetic outfit would be swell, but the best idea would be to give me a TSW pet for my purchase of Hide and Shriek. I’m not the only one who covets the pets and wants to collect them all, either. I think that would be a guaranteed sale in many cases, even for folks who may not want to actually play the game.

As  for ideas for pets, I am thinking a small school mascot for Innsmouth, complete with little letter jacket, would be awesome. Or maybe the mascot could be for the rival high school, Little Springs, and then devs could make the Innsmouth pet an achievement you unlock after so many successful scare matches. See what I did there? Now, not only are people buying the game, but they are playing it as well. Sounds like a total win/win to me.

So, how about that pet?