END_OF_DOCUMENT_TOKEN_TO_BE_REPLACED

There’s a mild trend on Twitter as I write this for Final Fantasy XIV predictions. It makes sense; after all, the fan festival is in just a bit over a week. And I’ll be on the ground as it happens, somewhat unexpectedly but not in an unwelcome capacity. And that just raises the question of what will happen in Las Vegas, much of which will not stay there despite the slogans.

Of course, I have predictions. Everyone has predictions. But I notice a lot of the “predictions” getting thrown out are less “this is probably what will happen” and more “this is what I want to happen,” which isn’t so much a prediction as a wish list. I like wish lists too, most of the time, but they’re not the same. And the record will show I’m also happy to make my predictions public, so I can either prove to be very right or very wrong as a matter of public record.

So what the heck: Here are my predictions for next week in Vegas. And no, I’m not going to predict an expansion announcement because we all expect that. I’m going to predict what we’re getting. 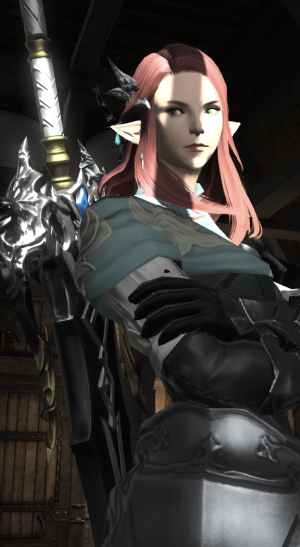 Are we going to hear about all three? Probably not, but that would be neat. Keep in mind, of course, that I do not have massive evidence for any of the these three; there’s one heavily suggested, one lightly suggested, and one more based on guesswork than anything. I can’t find any class predictions before the last expansion announcement, though, so I can’t compare myself to public records for you to decide whether I have a trustworthy history on these guesses.

Samurai and Red Mage both have edges as jobs that lots of people have clamored for since the game’s launch; we also know that Samurai was in the running pre-Dark Knight for the tanking slot, and we’ve had vague rumblings that the Parry mechanics will be getting trimmed up in 4.0 (which seems like something a Samurai tank would want). There’s also the vague cultural baggage with Ala Mhigo, which could support something like Samurai.

Red Mage, on the other hand, has two big things to support it. The first is the apparent occupation of an NPC you fight alongside in 3.4’s MSQ, whom I shan’t name for spoiler purposes; the second is Ilberd. We’ve seen Ilberd fight a few times, and each time he fought with just one sword whilst also using flame effects, suggesting that he may not be a Gladiator as his choice of arm might suggest. It’s a tenuous connection, but it’s enough to build a logical suspicion.

As for Chemist… well, that’s honestly more a result of the landscape. There aren’t a lot of jobs in the franchise that really slot well into the healer role, especially compared to the options for DPS or tanks. Without pushing yourself into really weird corner cases (“Dancer had healing spells at one point! Blue Mage had a couple heals, and also it’s totally OK if the job makes no sense with the game’s ability setups! Just have a Mime mimic a Scholar before you queue!”) you’ve got a pretty small pool to draw from. Chemist doesn’t take a lot of work, since its examples were universally either heavy on healing or support with a touch of damage.

Of course, if you asked me what I want to see, that’s another list entirely. But that’s also not a prediction.

I mean, duh. But unlike this expansion, Ala Mhigo itself will not be our base of operation; rather, the landscape is entered from Coerthas and the Black Shroud. The Northeastern Shroud and the Eastern Highlands could both make appearances as connecting regions, followed with romps through Xelphatol, Gyr Abania, and Ala Mhigo as the final area to explore. It would give us a nice spread of different landscapes, especially since Ala Mhigo could look like almost anything; unlike Coerthas, this is a region we’ve never seen, even pre-Calamity.

While I expect flight will be unlockable in much the same way as before, I also would love to see a region or two where flight is not possible, just as a reminder that you don’t get to fly everywhere. Ala Mhigo itself, for instance, could be an entire region and one without flying; the aether doesn’t support it, and there’s too much Garlean anti-air fortification to make it safe regardless.

I wouldn’t expect more than 6-7 regions in total, depending in part on whether or not we get a new central city. It would be plausible to have a new base of operations, but I would hope such a base would not look quite so bleak and unwelcoming as the Tavnazian Safehold from Final Fantasy XI, and that would be the logical point of comparison.

There’s not much room for the game to add new buttons on to our existing rotation, and there’s also not much customization in the game; two Scholars will play identically to one another with identical gear. Passives offer an easy way to solve both issues. You can easily balance classes around unlocking new passives to improve effects, and you can also broaden cross-class integration by allowing a wider range of passive skills to be equipped to various classes and jobs.

This one is admittedly a bit closer into the territory of “want” over “predict,” but there’s also the simple reality that we’re going to need to have something done before we can fit another five abilities onto our respective hotbars. Furthermore, the Heavensward additions largely dealt with things that the jobs were missing, like Paladin DPS options or Summoner skills to support burst damage and more interesting play. There are fewer gaps that call out for new skills and no rotations that wind up being rock-stupid, even if you’re playing Black Mage.

None of this, of course, prevents us from getting new active skills along the way, nor does it mean that the designers will actually go this route. It’s more pie-in-the-sky than most predictions. But I like the idea more than I like the idea of having to rearrange my bars again, so I’ll go ahead and make it.

A set of nods to a specific game

One thing that FFXIV loves to do is make a bunch of really big nods to specific games. We got the plot of Final Fantasy III in microcosm, and the Warring Triad and surrounding quests have frequently given a big wink to Final Fantasy VI. Our themed items are getting nods to Final Fantasy X. And I suspect we’re going to get a whole set of dungeons or encounters referencing one specific game once again, but I’ll be darned if I know what it is. There are lots of options.

For the record, I fully support either set of Fiends showing up as a group of Big Bads. That’d be swell.

How right will any of this be? Who knows? I will next week, and you can tune in then to see how accurate (or inaccurate) all of this is. Feel free to discuss it in the comments until then, or send feedback along to eliot@massivelyop.com. On Monday, we’ll return to your normally scheduled patch review antics.