Are you and your friends good enough at Guild Wars 2 to earn legendary weapons? On November 5th and 6th, ArenaNet and Academy Gaming are teaming up for a 64-team single-elimination PvP tournament, and the winning team will receive a legendary weapon along with other fantastic prizes. Sure, it’s going to be hard to fight your way to the top, but it might still be easier than putting in all of the work to earn that legendary through other means.

Signups for the event are open now, so you should probably have your team ready to go immediately if not sooner if you want a shot at participating. Every team making it past the first round of 64 will be awarded some prize, and the fourth round (with eight remaining teams) onward will be streamed on the game’s official Twitch channel. It’s good news for anyone who wants to be in a tournament or who just wants to sit back and watch some high-end PvP happen.

In other Guild Wars 2 PvP news, the team has posted a new poll about the ranked queue as promised. As we type this, over 80% of the votes are in favor of the restrictions. 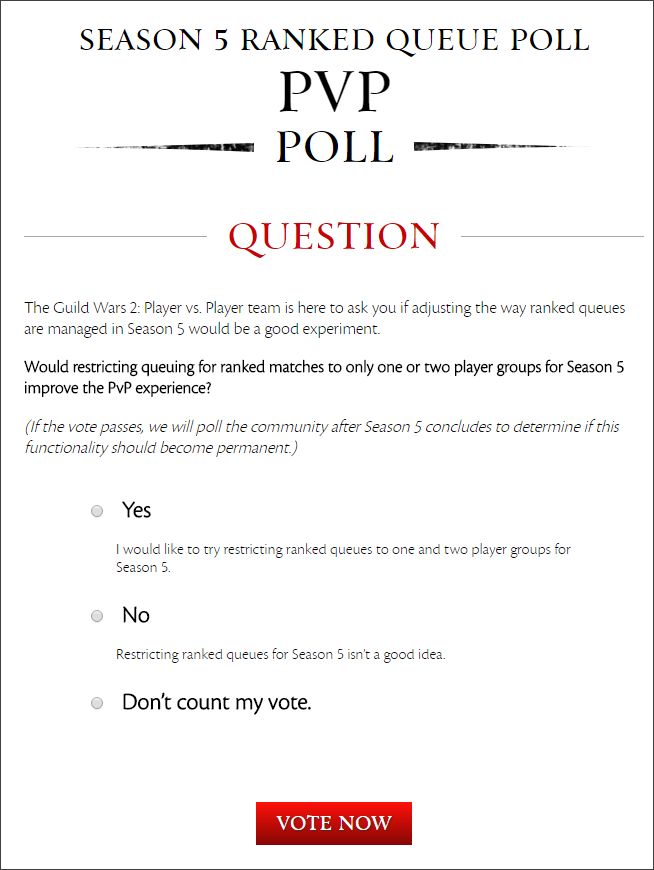 And for those tracking potential expansion leaks, there’s another one on Reddit, though as usual, we have to warn you it’s completely unconfirmed and very likely a hoax.

The Daily Grind: Are you playing a ‘morally disengaged murder hobo’...