END_OF_DOCUMENT_TOKEN_TO_BE_REPLACED
If you’ve played MMORPGs long enough, you’ve probably been to at least one in-game wedding — maybe even one for your own character. But have you ever seen an MMO used as the actual setting for a real-world wedding?

You’re about to: in Warframe. Two players who go by the handles Eli and Niti will be carrying out their real-world wedding online and in-game as their avatars in a ceremony legally officiated by DE’s Rebecca “Lotus” Ford and streamed lived on Twitch. Yep, this is a real wedding, legally binding, not just roleplaying.

“We have friends from around the world,” writes the happy couple. “We had discussed ways of trying to get all of them there for our wedding, and came to the conclusion that it was impossible, we have friends in Denmark, Japan, America, Canada, Germany and England… it just wasn’t going to be possible to get everyone in once place. We also felt that our online persona really is us, it’s how we interact with the rest of the world, how we see our friends, how we talk to them.”

“So the idea of having an online wedding was banded about, but until Warframe we had no idea of how to do it, or where to do it,” they explain. “Niti suggested that we ask if we could have our wedding in Warframe. […] We were both stunned and amazed that DE said yes, and when we told the rest of the clan (and my family) they all were super excited about it.  It allows us to have our wedding in a place we call home, in our favorite game, and with the people that we care about being able to be there in ‘person’ as it were.”

Everyone’s invited to tune into the ceremony on Monday, October 17th, at 1 p.m. EDT. 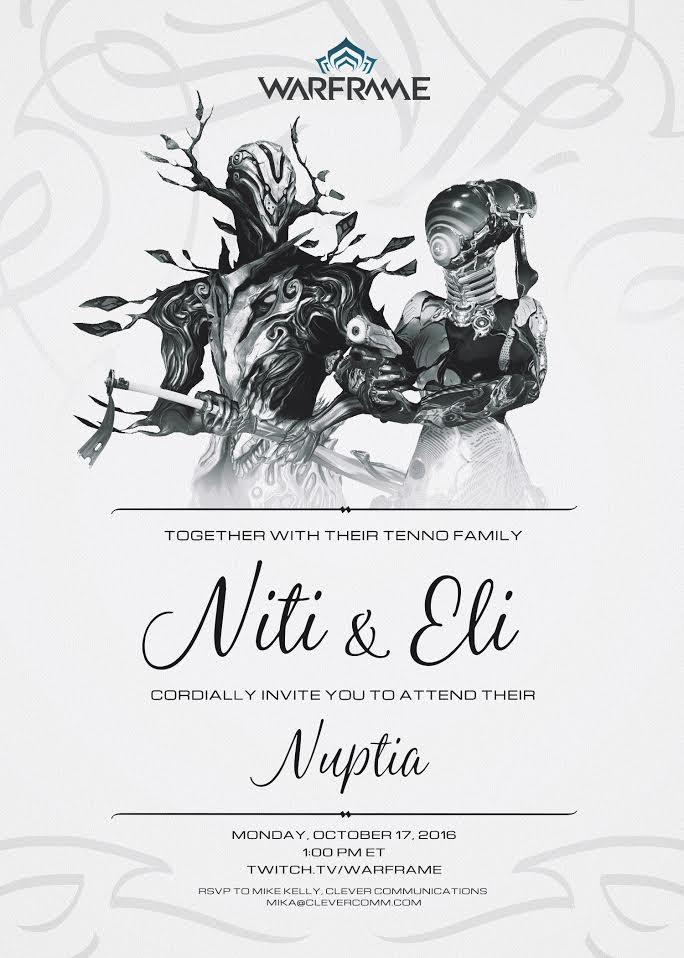