END_OF_DOCUMENT_TOKEN_TO_BE_REPLACED
As a horror game, Final Fantasy XIV fails, due largely to the fact that it isn’t a horror game and never attempts or pretends to be one. It’s the same sort of charming Renaissance fantasy as Final Fantasy XI, and that’s exactly what it wants to be. If you want to play a dedicated horror MMO, you play The Secret World.

That having been said, there’s a lot of difference between a horror game and a game containing horrific things. FFXIV does not try to be the former, but boy, it loves introducing you to the latter. Lest we forget, this is the game that also only just wrapped up the story of a woman carrying her dead fiancé’s head in a bag, and that was just an aside.

Let me be totally level with you: I will be the last person to say that 90% of version 1.0 had anything on the current version of FFXIV. But that remaining 10% includes stuff like Mor Dhona, and I am hoping against hope that someday we once again flit around the southern side of the region and return to some of the unearthly nature of that place. Current Mor Dhona feels far friendlier than 1.0’s zone ever did, and not just because 1.0 ended the world there and didn’t have Revenant’s Toll as an impromptu fortress.

No matter which version you’re more familiar with, though, Mor Dhona is a zone that feels subtly wrong. The ambient aether of the area is seeping out and producing a strange landscape that’s unlike anything else in Eorzea, with clouds that never seem to quite disperse and elemental aspects that make little to no logical sense. That sense was even more pronounced in 1.0, with enemies that were intensely dangerous to pretty much everyone and little in the way of safe refuge.

I think some of the unsettling nature of the place has been lost by making a focal point for so much of the 2.x storyline, though. It’s hard to feel properly freaked out by the same place you stop in for regular gear upgrades, after all.

This quest leads you right into Tam-Tara to deal with Edda, and the leadup isn’t particularly scary. The dungeon itself is pretty horrifying, though, and the following cutscene brings in an element of horror that doesn’t even seem like it should work in the setting. But it does, and it does so wonderfully, even without some players reporting that they saw Edda lurking in the background of various places after the quest was completed.

In fact, that’s part of what does make it so scary. Horror, at the best times, implies a world that’s broken on a fundamental level. It’s why I tend to be very dismissive of horror that focuses mostly around jump scares and clawed things; that’s scary, but only until you know what’s coming. Good horror nudges the rules of how the world works into a place where your understanding of the mechanisms is flawed on a fundamental level.

Edda, in that regard, makes the leap beautifully in this quest. What even is she? We know how voidsent work, how ghosts work, how all of these things work, and yet she doesn’t conform to any of that. The fact that her actions are entirely without apparent malice just makes it worse, like she really doesn’t understand why anyone would be unhappy about her actions. It doesn’t make sense, but in that wonderfully baffling way that marks good horror.

Is Wanderer’s Palace the scariest dungeon thematically? No. In fact, it’s even less scary now, even done synced, because there’s no way to really mirror what it was like back in the day. You can’t get that same experience of seeing the Tonberry Stalker come toward you, slowly, knowing that if it reaches your party it will kill you all, that you can’t even fight back.

Tonberries are used very effectively for horror here by being enormous, largely featureless, adorable waddling things that just carry a lantern and a knife. Instinctively, they look cute, not scary. And yet these huge tonberries will demolish you in seconds. You can’t fight back. It’s that subversion, that something so innocent looking can just fall upon you and end you, and a subversion of the very rules of the game that you can’t fight them at all. Instinct says “here’s a monster, let’s fight it,” but that doesn’t work here.

I have friends who were literally scared to do this dungeon back in the day, and I understand why. It’s scary. 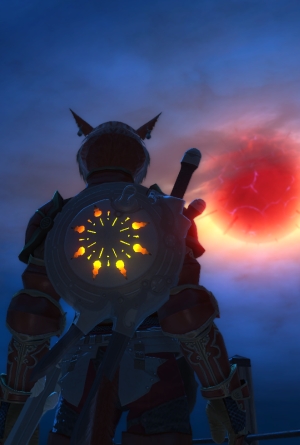 Atomos is one of those concepts that the online games have picked up and run away with in marvelous fashion. Atomos is also probably the most inscrutable voidsent, showing up in all sorts of different places without any unifying mechanics. What is universal is that the maw it has is a portal, and sometimes it can bring things back and forth from either side… and sometimes it simply devours what it finds.

It’s the devouring that I find so creepy. Atomos has no features beyond a huge mouth and a tiny tail, and yet that mouth never closes. It’s not eating you, it’s devouring you. It’s sending you somewhere else, and it’s not even clear if the creature derives a benefit from this or just does it. In a game where deathblows are the sort of thing that come from huge falling meteors or erupting magic or driving spears into vital organs, the idea that you could simply be plucked from reality is off-putting and appropriately frightening.

How is this different than the scariest monster? Well, “scary monster” is a category of something that’s just plain horrific. The bestiary of Silent Hill 2 is full of scary monsters, for example, and it’s obvious as soon as you set foot in that region that it’s horrifying. But there are certain beasts through Eorzea that are scary, but only if you stop and realize what you’re fighting and really think about it. An obvious example – and enviable runner-up – are the plant-infested bears in the Arboretum, being puppeted by seedkin amidst what is otherwise a fairly innocuous dungeon.

But Forgall’s adds win the matchup. Why? Because they’re very easy to miss, just being zombies that you beat up that later get turned into voidsent. That’s not so scary… until you notice their dialogue. You see that they’re each cognizant of having died, and dying again, and again, and worst of all that Forgall is using them to make more voidsent. They are screaming in fear when he does that.

Look, being a zombie is not really on anyone’s list of life goals, but the usual understanding is that zombies are dead thing with little to no feeling or knowledge of what they are. These zombies, though? They know what they are. They hate it. And they can still feel pain, and they still beg their captor not to use them this way. That is scary.

As always, feedback is welcome in the comments down below or via mail to eliot@massivelyop.com. Next week, we’ll have some experience with patch 3.45 under our belt, so I’ll be talking about that and possibly asking some questions about the game’s “project” weapons.