I’ve devoured all of my homemade pumpkin pasties and downed the last of my butterbeer while enjoying the Halloween festivities in Guild Wars 2, gaining some very pretty treats for my playtime. One of my favourite parts of the Halloween season is seeing characters in costume, though: Only in GW2 — aka Fashion Wars — will you see so many characters getting into the season while playing the Mad King’s games and generally being festive. The best effort I put forward this year was to apply more Abyss dye to smoke out my usual armour colour scheme and equip some spookier weapon skins, so I’m always blown away by the effort some people make to get into the spooky spirit. Costuming is a year-long pursuit for many players, but Halloween seems to bring out the most awesome character cosplays and gives me a perfect opportunity to showcase the talent in the GW2 community.

In this edition of Flameseeker Chronicles, I’m going to showcase some of my favourite character costumes from 2016, as spotted in-game, spied on the season-focused Guild Wars 2 Reddit threads, and during my random browsing of far too many GW2 YouTube videos. Be sure to add screenshots of your costumes in the comments for me to check out, and don’t forget to share any real-life character cosplays you wore as well! 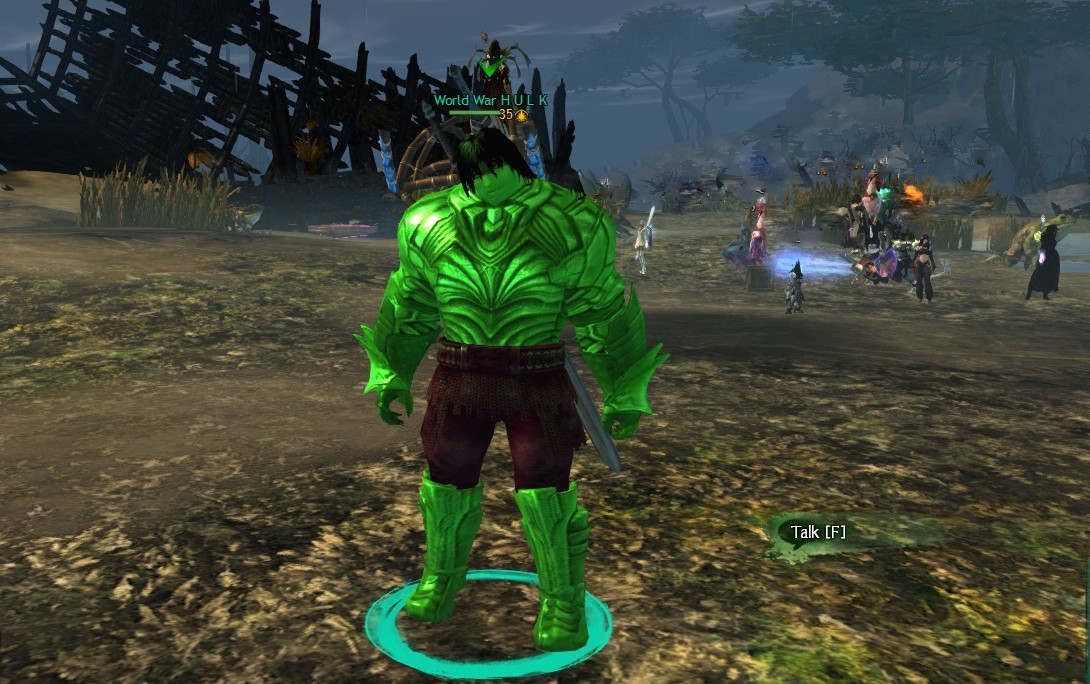 I have to admit that my first entry is a little bit of a cheat, especially since I first spotted this handsome green chap when doing some nightly world boss running over the summer, but since I saw the same character enjoying Halloween fun in Lion’s Arch, I think I can get a pass for the inclusion. I have seen a few other takes on the angry beast running around Tyria, but particular props go to this look for its stripped-down and minimal yet still hulky-bulky quality. The pieces have been very carefully selected to best build the physique required for the Hulk without adding in too many extra textures and oddities that are particular to many heavy armour sets, which sets this toon apart from the other versions of the look.

This is a more recent but still fantastically comical spot from my travels around Tyria. Imagine this Christmas-obsessed lass’ glee when I saw Santa killing the Triple Trouble wurms with me! I know the jolly old man has plenty of time off between one festive season and the next, but I never imagined I’d find him playing Guild Wars 2 in his spare time. In my shock and delight, however, I seemingly forgot that the PrintScreen button exists on my keyboard because I cannot find any screenies of the man in red in my screenshot libraries. Maybe it’s because you’re not supposed to stumble across ol’ Saint Nick, least of all share the proof, so perhaps I can attribute the lack of an image here to some good old fashioned Santa-magic proof deletion. I love the preciseness of the holly berry red shade that was chosen, the well selected facial features and extras, and the jolly atmosphere created by the particular player’s antics. 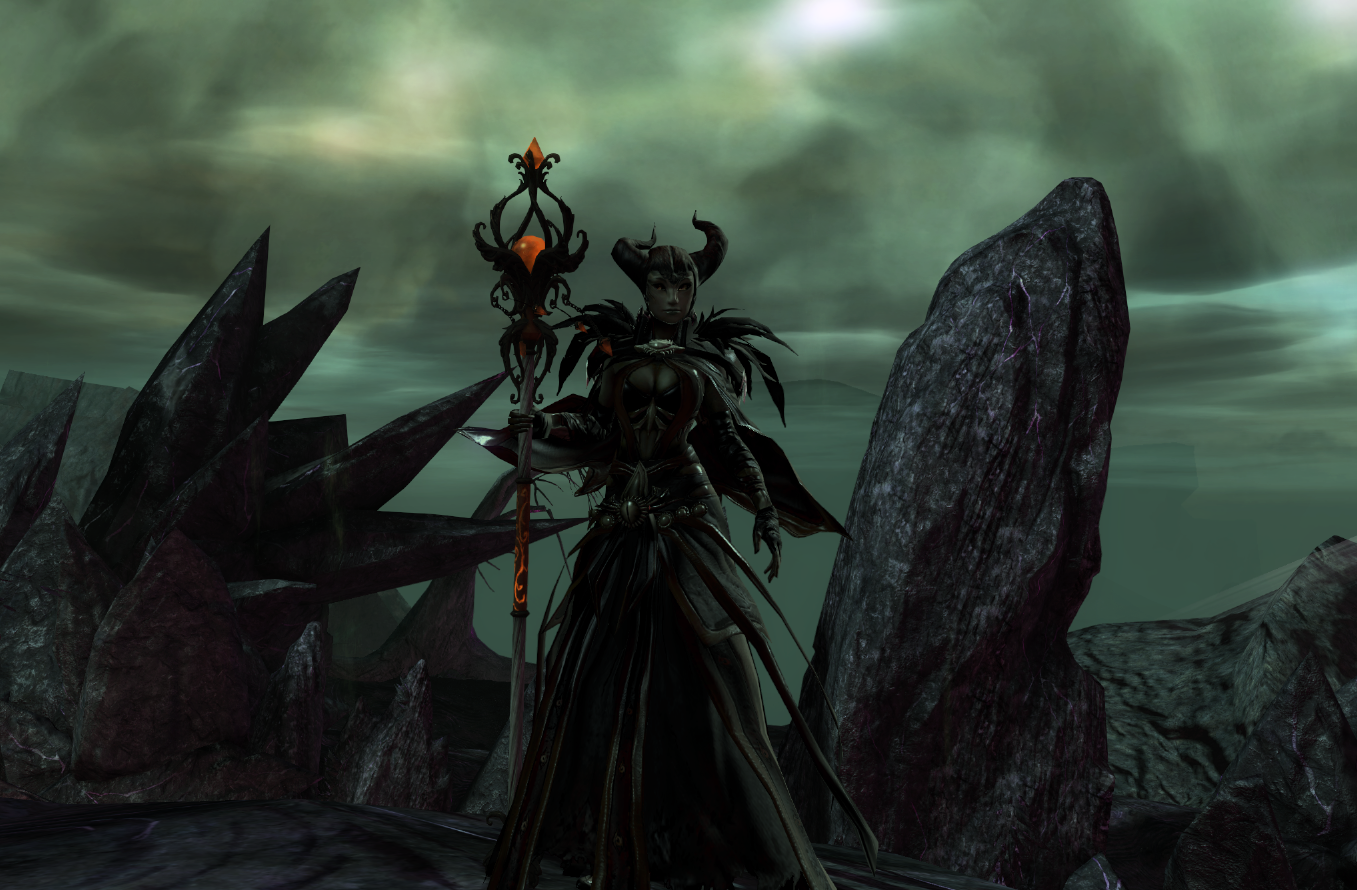 Of all the Disney bad guys, I believe Maleficent is the most effortlessly evil-looking! This is a look I stumbled across on Reddit, and I knew it had to make my character costume round-up for how polished the finish is and for the beautiful composition of that screenshot. The staff makes this costume in my humble opinion: Although green is the more obvious choice for Maleficent, I adore the warm, seasonal glow that radiates from the image. It really helps that the sky looks as though evil is brewing by Maleficent’s hand in this shot, which takes me back to the animated Sleeping Beauty movie. 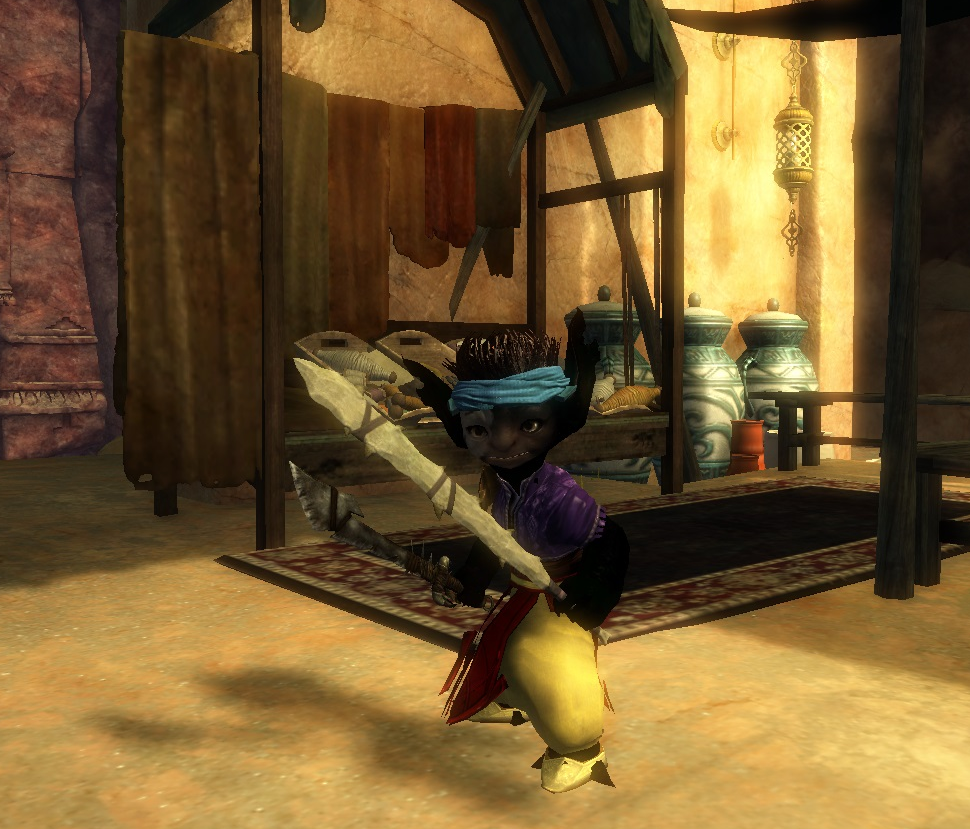 Mixing a super-sweet unlikely hero with a charming little Asura who just oozes cheeky Aladdin charisma is simply genius. I again saw this image on Reddit and felt that it warranted making the list for how well the character fits the costume and the personality match between the character and caricature being depicted for the holiday. Small details such as the choice to wield a curved blade that is indicative of those possessed by the Sultan’s guards really gives the costume the context it needs to tie it together. 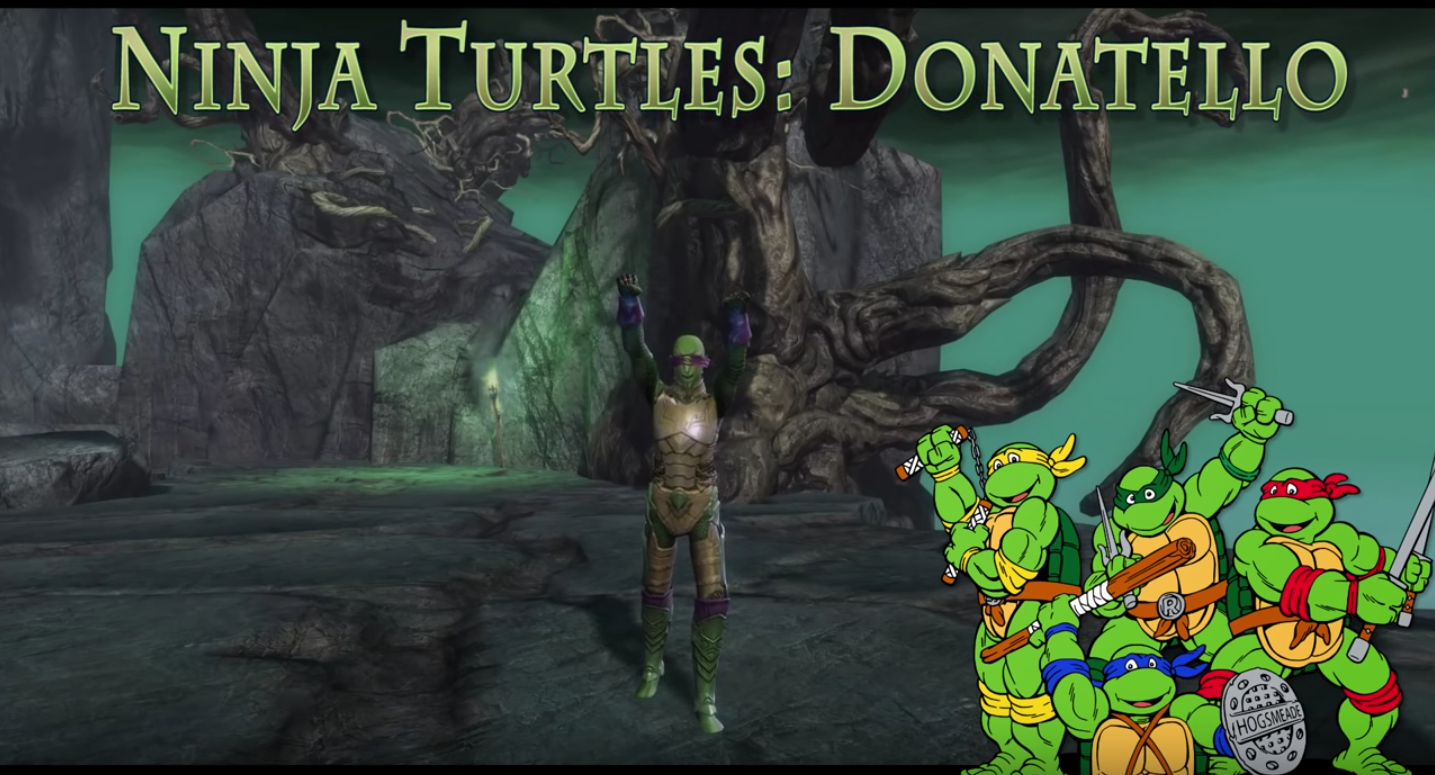 The first TV show I was ever hooked to was the Turtles, and I haven’t shaken the obsession since. I love how the actual gear used to create the turtle look is quite basic: I have to admit that I usually feel that the best looks come from rarer pieces, but I’ve now been swayed by the power of carefully choosing dyes to pull a cosplay together. I could have easily listed every single costume featured in Posh Toast’s fabulous video because every piece is charmingly translated from its source material, but the Turtles definitely are my favourite of the bunch for the genius use of Banded and Militia armour to get the right colour banding to distinguish each turtle from one another. 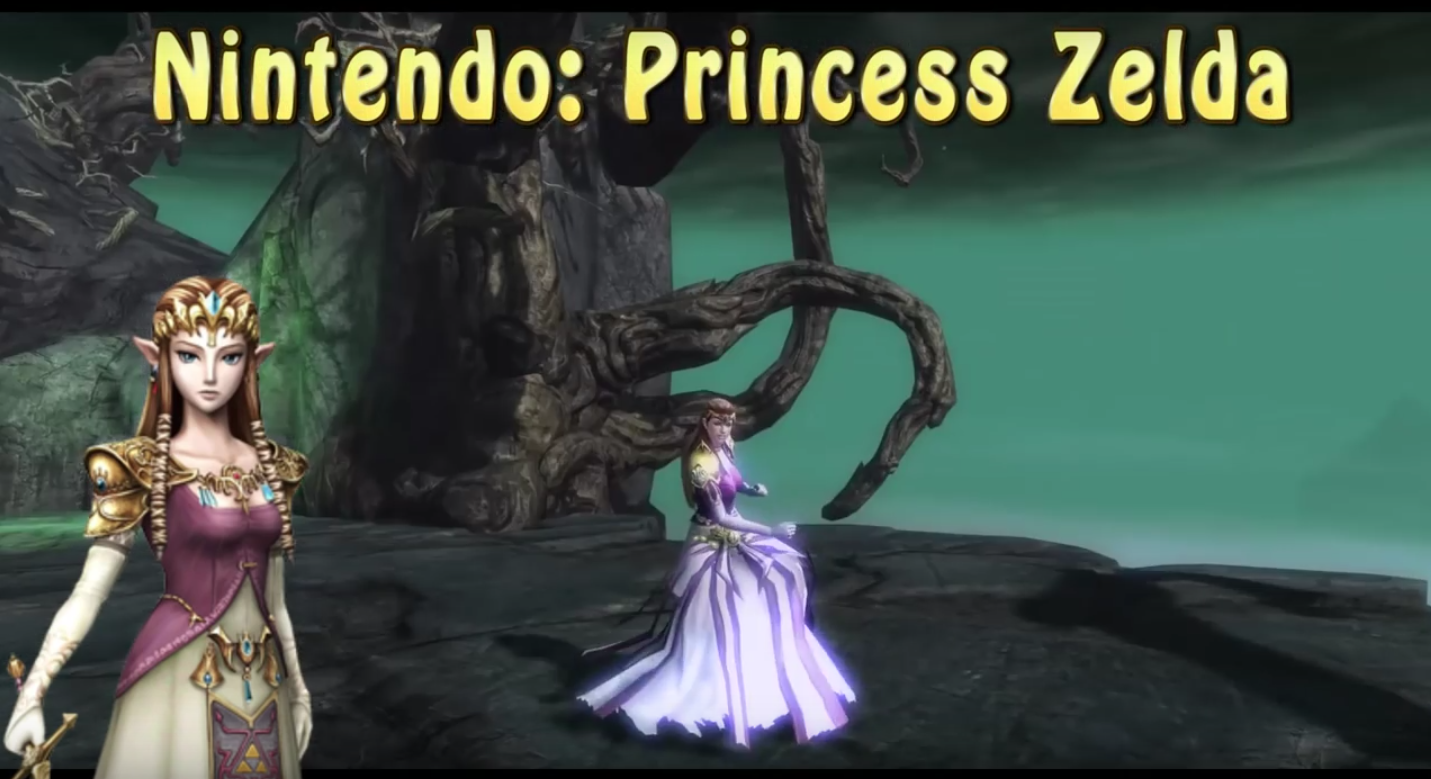 This is by far and away the floatiest, prettiest look I’ve seen this Halloween season, especially with that gorgeous skirt. This look makes my list for how completely and entirely the character embodies the cosplayed princess, right from the intricately braided hairstyle to the gold belts and shoulder accents. This is another ornate source costume that undoubtedly required much planning and testing to get this accurate. I know several local cosplayers who have painstakingly created this outfit in real life and have had trouble including some of the details this costume manages to capture. 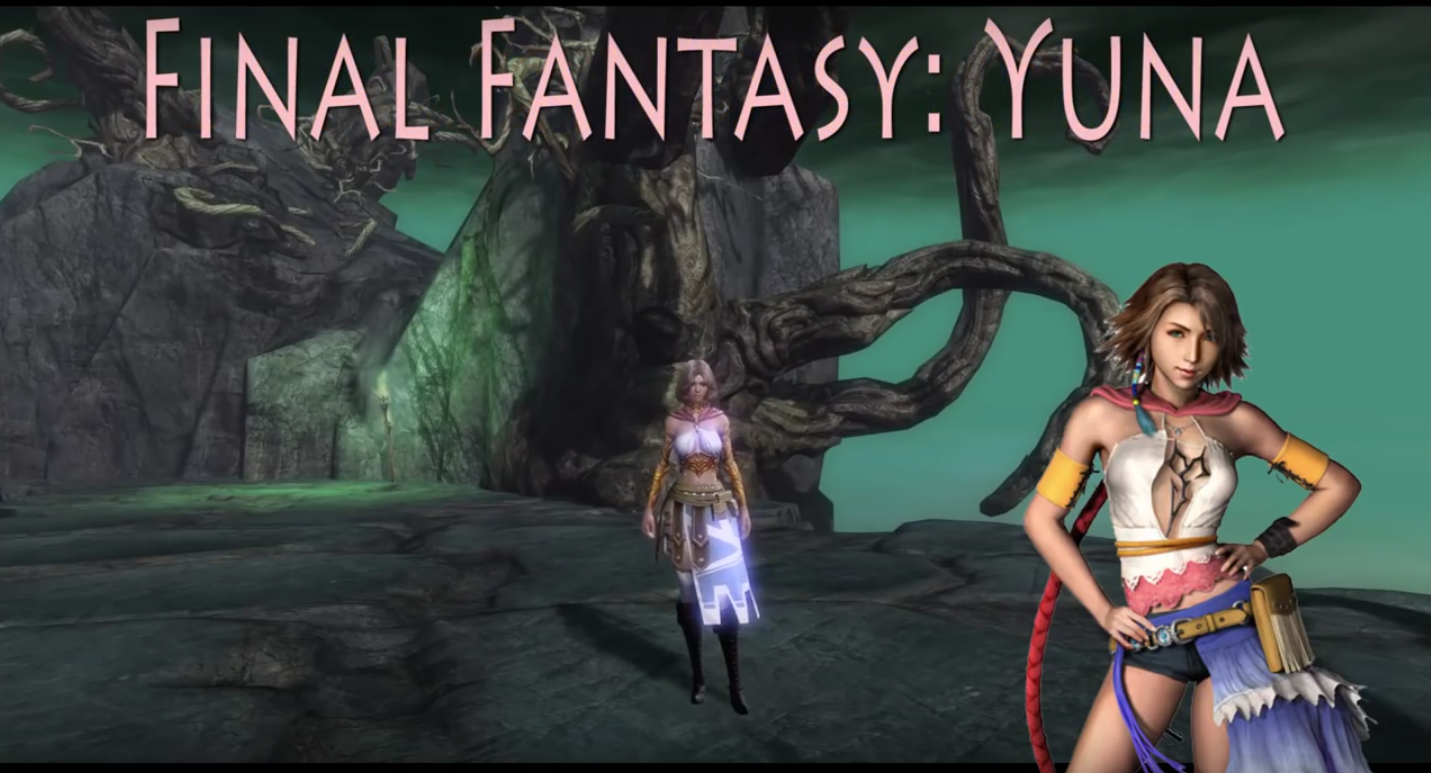 Yuna has a particularly difficult outfit to replicate with a traditional armour system due to all of the fine details and accessories she rocks, so I was absolutely flabbergasted when this cosplay came up in the same video as that glorious Turtles look. Even the hair style, which is arguably the most boring fashionable element of the Guild Wars 2 character customisation tools due to samey textures and a lack of diversity in styles, is really accurate to the source material. 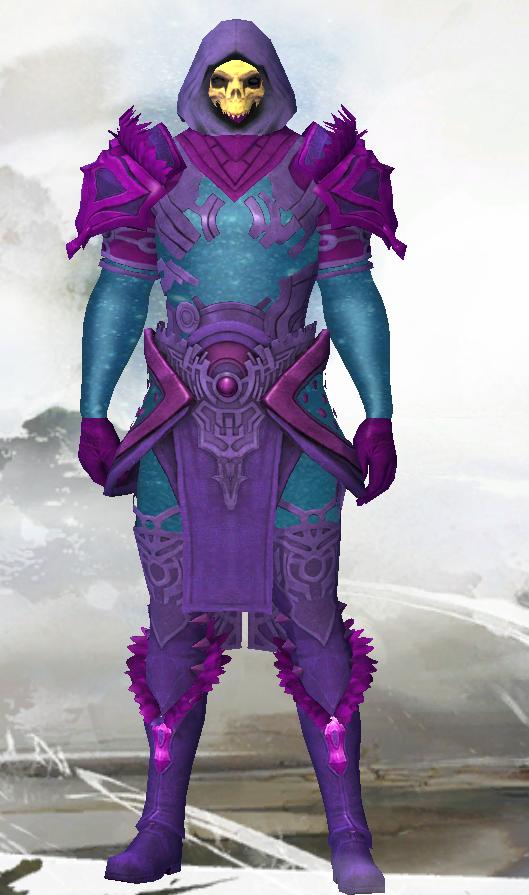 OK, the owner of this character admits that the character theme isn’t just for Halloween, but if you ever see a more faithful Skeletor created in GW2 then I will eat my Bloodstone Crown! The dye range in the game is admittedly impressive, but I was particularly impressed with how faithful the colour matching is in bulletr0k’s version of the character is seems like mind-blowing attention to detail. The Gaze of the Lich hood is usually worn in a more drab fashion with much more muted colouring so I would never have thought to make it work as a key piece of such a cool costume.

I have had an absolute blast looking through public costume images and running into so many fellow players in costume throughout Tyria over the last week or two, so I hope you enjoyed seeing my favourites collected in one place. I will most definitely look at my gear choices for next Halloween much differently after being exposed to such a high volume of fantastically faithful costumes and taking the time to look at what sets them apart from the pack. While the fashion side of the game hasn’t captured much of my attentions up until now, I can’t consciously look around me at so much A+ creativity and not reconsider. If you’re into costuming your characters, I’d love to hear how you tackle the process and pull together your ideas.

Tina Lauro Pollock has been playing Guild Wars 2 since it launched and now pens the long-running Flameseeker Chronicles column, which runs every other Wednesday and covers everything from GW2 guides and news to opinion pieces and dev diary breakdowns. If there’s a GW2 topic you’d love to see covered, drop a comment Tina’s way or mail her at tina@massivelyop.com.

One Shots: Imitation and flattery

EVE Online shares its economic report for January 2020 and hands...

The MOP Up: Coronavirus concerns are impacting PAX East 2020

Torchlight III discusses adjustments being made to combat, skill progression, and...