END_OF_DOCUMENT_TOKEN_TO_BE_REPLACED
If you’ve ever wanted to call out “Once more unto the Breach!” as a battle cry, Path of Exile offers you just that chance starting on December 2nd at 3:00 p.m. EST. That’s when Breach, the Atlas of Worlds mid-expansion challenge league, launches. And this three-month league is literally all about finding and entering short-lived breaches in reality, furiously fighting enemies for new goodies before the brief window of opportunity closes.

What exactly will players face when they enter a breach? What rewards will they emerge with? And what other changes are in store for the rest of Path of Exile in patch 2.5.0? Producer Chris Wilson shared these details with us, and we’re sharing them (and the images and trailer) with you. Read on!

The next big thing

As is customary for the non-expansion leagues, Breach will be bigger than its predecessor Essence, which debuted with the Atlas of Worlds expansion. This keeps the level of content more balanced at every three-month release. The next expansion, expected in March, will then return to a smaller league. The timing of Breach as well as its size, Wilson noted, gives players plenty to do over the holidays. “The purpose of this league is so that it’s available over Christmas for players to play,” he said. “We usually find that there is a big upswing of people just playing around the holiday season.” He called it one of the larger leagues the team has done, “so we have meaty content for people to play over the Christmas period.”

For this league, Wilson also feels Grinding Gear really hit the nail on the mark in terms of itemization. He told me that there’s a whole variety of players that play in the leagues, so the team is careful to not balance the league entirely toward hardcore or toward new players, but instead gives something for each. In Breach, he explained,

“Players who play with a shallow amount of progression in the leagues do get some cool items from it, and those who want to sink three months into really probing the depths of it and getting the best stuff out have some interesting stuff that will take them a while to achieve.”

As you’ve come to expect, there is a hardcore permadeth version of the league as well as a regular one as well as 40 different challenges within the league for players to complete. The rewards for completing these challenges are:  Demon Hand Gloves (12 completed), a Breach Portal (24 completed), and demon Wings (36 completed). Wilson described these as “probably [the game’s] most impressive-looking set of rewards so far.” But will offering the most visually appealing cool stuff as rewards end up hurting more than it helps? There is also the concern that doing so will sabotage microtransactions sales in the game. On the flip side, having an item like the portal at 24 challenges might very well entice enough players to increase their playtime by the four to five hours a week needed to meet that accomplishment. So so there is a wait-and-see approach right now.

Hold on to your Breaches

While some folks might run from tears in reality, we know that we’d totally poke our noses in to explore. So where can we find breaches? And what exactly will we find when we do enter one? Like the encounters from the Perandus league, the breaches are placed randomly throughout the regular gaming areas, so you stumble across them just by playing through Path of Exile. Wilson noted that the breaches, which are purple portals hovering over a demon hand, are timed so that players may come across one every 10 to 15 minutes of playtime. Worried that you’ll miss out on one because you deigned to turn left instead of right when you entered the zone? Don’t be: The breaches won’t open you actually click on them. But you’d better be ready for it the second you do, because that’s when the timer starts! 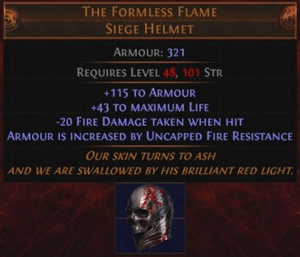 Once you click the portal, the breach opens as a widening circle of an alternate dimension filled with monsters. You’ll have to quickly dispatch all of these threats in order to keep the breach open and expanding! Basically, the more monsters you kill, the longer the breach will stay open and continue to expand. And the more it expands, the more monsters are revealed for you to kill to keep it open. And the more monsters you kill, the more rewards and exclusive items you can earn. Wilson noted that the breaches will typically stay open for around 30 seconds to a minute, depending on how well players deal with the mobs. “The thing we’re experimenting with here is the style of gameplay which is very action-packed but is quite short lived.” he explained.

One breach is not going to be the same as the next, however, There are five different flavors of breaches: fire, cold, lightning, physical, and chaos. Each breach type has its own monsters and loot that drops, including three unique items that can be acquired from mobs, chests, or the bosses. There’s a jewelry piece, and armor piece, and a weapon per type, making for 15 new rare items in total. The breach types also have different rarity levels. Players will encounter fire, ice and lightning breaches far more frequently than the physical or chaos ones. Wilson explained that this was done so players “could access the end-game content of each one at different times depending on how often [they] encounter [each type].”

On top of differences in frequency, the various types have differences in difficulty. This gives more players a chance to participate in the end-game part of the league. Wilson elaborated:

“Because there are five types with relative rarities, some are easier than others. Our intention is that this isn’t all cloistered away for the top 1% of players. The easier breaches — like the fire, cold and lightning — are totally available for people to play relatively often.

Occasionally, “maybe one out of every five or six times” according to Wilson, you can run into the Breachlord. There are five types of Breachlords, corresponding with the five different flavors of breaches. This boss cannot die at this time, but the amount of damage you inflict on it before it escapes affects the amount of reward you get in the form of tradeable breach splinters. These splinters (which can also drop from mobs or chests in the breach) are combined to make a breachstone. The breachstone is what grants a player access to the domain of that Breachlord through the Atlas of Maps.

Here, in its domain, is where players actually have the chance to kill the Breachlord for extra reward — if they find it in time! Of course, you have to kill mobs fast enough to keep the breach expanding until you find the portal to the Breachlord’s lair; if you don’t, the breach will collapse and you will fail. If, however, you do make it, be glad to know that the boss fight itself is not timed.

As with previous leagues, players can also focus on whichever types of breaches and Breachlords they prefer. If you end up wanting specific loot or to face certain Breachlords over others, you can always trade your unwanted splinters and breachstones for those you do want. This can really come in handy if you are trying to get a Breachlord’s Blessing to drop from the boss, an item that can upgrade one of the unique items associated with that type of breach to a new version. 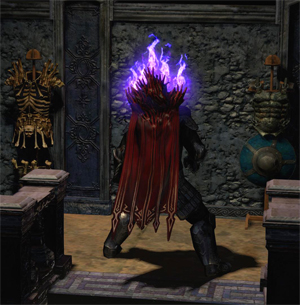 Although it isn’t an expansion, that doesn’t mean that patch 2.5.0 is only about the league. In fact, this is the patch that brings the new game client! Direct X 11 will now be working, including 64 bit support for much better performance. The main game is also getting more than 20 new unique items, a new channeling support gem, and unique golem jewels. The Forsaken Master system has been improved  and a early areas have been visually revamped.

Wilson also described the new cloth physics in the game. The team actually hired an expert in math and physics who enabled them to add wind simulation and cloth physics into much of the game. Besides watching banners sway as you they walk by, players can see the new physics in play on the new cloaks available in the supporter packs. Wilson pointed out that this time around, the packs are going for $30 and $60, instead of starting at the $60 price point and going up to $400. This is in direct response to feedback from the players. On top of cloaks, these packs also include a portal effect, weapon effect, social portrait frames, supporter titles, and a big pile of points. The packs go on sale on today, and players can actually upgrade packs if they decide they like a more expensive one more.

Thanks to Chris Wilson for his time!

Profane is a full-loot open PvP sandbox of territorial domination

Aion NA invites players back to Katalam with a new battleground...