This past week, an interesting guild situation arose in Black Desert. A Massively OP tipster was surprised by an unusual symbol above the entrance to a particular guild city and bedecking its guards: a guild flag with a down-arrow and a female stick figure. Presuming, reasonably, that the heraldry was sexist in nature (down with women), the tipster contacted Kakao. After some back and forth between the player and support staff, Kakao made its determination: that the guild heraldry wasn’t sexist, didn’t violate the terms of use for the game, and wouldn’t be forcibly removed. 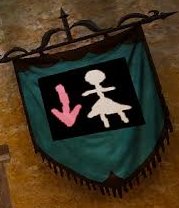 We reached out to Kakao to understand the verdict. “First and foremost we do not condone any sexist/racist or any other player behavior that would discriminate against other groups, individuals or beliefs,” a representative for the company told us. That said, he explained to us that Kakao believed the guild in question had picked the heraldry as a “parody” of the heraldry of a powerful rival guild called Man Up.

“We feel that for the people on this server this context would be apparent, as players would be acutely aware of such a popular guild (in menus, emblems, in-game text popups and roaming the environment),” Kakao said, though it was clear that was not always the case, and none of that context, necessary for parody, was conveyed in the actual image — meaning it was still possible for players not intimately of the guild meta of the server to stumble into the heraldry while out on an innocent shopping trip and draw conclusions about the studio and the game’s players that weren’t intended. Sexism doesn’t require intent, after all. And Kakao agreed that it was a difficult decision.

Ready for the twist? Even though it hadn’t been asked or told to change the sigil, the guild apparently did so voluntarily on Friday anyway, making the specific complaint moot (although they changed it to a symbol of a dog with a line through it). But it nevertheless raises questions about just what harm, intentional or not, players can do with some of the more free-form tools available in MMORPG sandboxes and how MMO studios are asked to rule on their meaning, existence, and validity.

With thanks to our tipster and Kakao as well. Images used with permission.
Advertisement

Err. That pic of a dog with the line through it reinforces animal cruelty. I’m gonna file a complaint and riot in the streets and punch people in the face and destroy the property of people that have nothing to do with it and write an article with a topic that I don’t care about to get people arguing over nonsense so I can get more ad clicks and make more money. Am I doin it right? Am I as dumb and pathetic yet as the rest of the people in the world?