Despite the fact that for this round of Choose My Adventure, I am jumping into The Elder Scrolls Online in an era of doing whatever I want at any level I choose, it still makes sense to just go through the starting experience in a rather straightforward fashion. Obviously, the starter experience points you in a pretty obvious direction right away, but once you’re past the starter experience it still makes a certain amount of sense to keep rolling along with the storyline. You’re surrounded by quests and stuff to harvest right away; it’s pretty straightforward.

A lot of things, however, haven’t changed since I played the game in the beta forever ago. The story is, in many ways, in the same space it was back then. I wasn’t terribly enamored of the experience then, and so I will admit right off of the bat that I didn’t have high hopes this time. I mean, it was the same story, same overall experience — so how different could it really be once I started moving beyond the earliest parts of the story and into adventuring within the frozen lands of the Pact?

The answer, it turns out, is pretty darn different — for a variety of reasons. 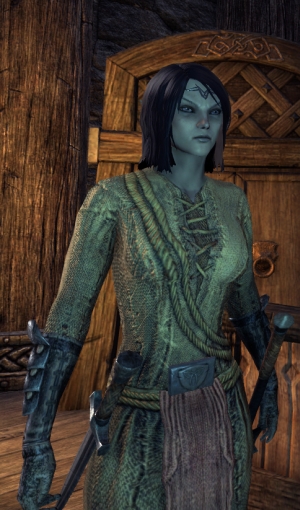 My assessment of the story still sits at about the same place as it did when I played the beta, although I find things a little more palatable once we get out of the prologue. You wake up in the realm of the dead-but-not-really and immediately get besieged with proper nouns, Jennifer Hale as Jennifer Hale (Blonde Edition), ancient prophecies, and eye-rolling that threatens to detach retinas if you’re not deeply invested in the world’s lore to begin with. Because that’s what the story is, really: lore. It’s people moving into place settings and your character gamely tagging along, with little to break out of the standard rote of Good Guys Fighting Evil Power And His Army Of Bitey Scratchus Minions.

That’s a bummer. But as with many things, you can bypass a lot of that if you’re having fun playing the actual game. And to my surprise, the starting experience immediately seemed to have stepped up its effects from when I had played the beta, even once you get past the fact that it seemed to have moved beyond its lockpick obsession. (Seriously, lockpicks were everywhere. I don’t know why, but it was just Lockpick Central.)

Combat still lacked the springy responsiveness of many real-time combat systems, but rather than being awkward and plodding, it seemed to be faster and more responsive than what I remember from years ago. There were also more distinct indicators of ground effects, interrupt attacks vs. blocked attacks, and how one could generally engage with enemies to dispatch them in a timely manner. The experience wasn’t perfect, but it felt fun, and it almost immediately sidestepped one of my complaints about the beta experience, when abilities seemed to have little impact on the flow of battle.

Why the change? I’m willing to mark it up to a few different factors:

So, some combination of all those listed elements, I’m sure.

Anyhow, once I finished up the introductory experience of ancient prophecy and blah blah blah, the story… well, it remained weak. If that’s been adjusted since the game’s launch, I can’t attest to it. Fortunately, the actual combat and leveling experience was enjoyable enough that I didn’t actually care all that much, so I settled into a nice routine of my new character Ceilarene not particularly following prophecies but following the path of money taken from corpses.

ESO uses a skill system that’s reminiscent of its source material, to my understanding, but also a bit different. In short: Doing stuff related to a skill advances that skill, as well as earning experience while that skill is relevant. (So if you’re just out leveling while wearing light armor, your light armor skill advances.) As your skill improves, you get access to more skills; as you advance actual skills, you can eventually morph those skills into something else.

I found a Dragon Knight build that I rather liked and catered to my preferences, and thus I was off and running. The story I still found to range between “bland” to “decently something,” but the actual mechanics wound up satisfyingly fun, so I could overlook what I didn’t care about. It was also nice more or less tackling problems in whatever order I came across them; I never felt as if I was at risk of missing something important or outleveling important bits, nor did I feel like indulging in the joy of poisoning and bleeding a wolf while draining its health was a waste of effort.

The actual story is a bit perfunctory, but it does at least manage a sense of urgency: You come to in Bleakrock Isle, which is facing an attack by the Covenant and has its designated watcher desperately trying to evacuate the town while dealing with a whole bunch of town residents who love to wander off in seemingly random directions. That gives you motivation to roam over more or less the entire island, getting the residents to return to town by fixing several of their somewhat arbitrary problems. 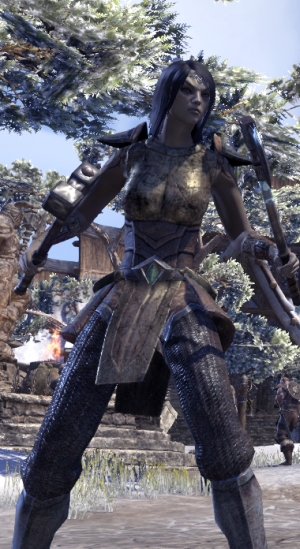 You can, of course, also start the evacuation early if you so desire. But it makes you kind of a jerk.

Ceilarene may be a jerk, but she’s more the “I don’t care about your ridiculous prophecies” jerk and less the “screw that guy, let’s leave without him” jerk. So I roamed around, looting barrels, hacking up cultists, and generally skilling up until I had cleared everything off the island. From there, it was a short jaunt through the nearest dungeon catacombs on to a boat, and from there it was a short ride to lizard town.

I was told the actual name of the place, but I wasn’t paying attention and didn’t much care. It’s lizard town. It’s full of lizards. All this, all the time. That’s what I’m picturing, and I figure this is more or less the game’s win condition. [We think it’s Bal Foyen, but we agree that Lizardtown has a better ring to it. -Eds]

Of course, there’s actually more story going on from here, so that’s worth considering. But I’m also exploring the fact that the game does now scale everything to me, and I’m not going to lie; there are options about where I go next. If you’ve been playing the game since launch, it’s quite possible that all of the stories I’m exploring right now are old hat to you, and while I would believe that they may have been trimmed up a bit since launch, they’re probably not that different. But the DLC content that’s unlocked by being a subscriber? That’s new.

And given that One Tamriel makes this stuff accessible, maybe I should jaunt over that way. Hey, if I don’t care about prophecies, perhaps they’ll have stuff I do care about. So yes, friends, it’s time for the polls.

CMA: Where should I be heading?

Of course, last week I also scrimped on a less-serious poll. Here, let’s toss one in for this week.

Both polls end at noon (EST) on Friday, so you’ll want to get your votes in before then. Stay tuned for more exciting adventures with Ceilarene then! And even if the story is still nonsense, the path through to it is proving pretty fun.

Welcome to Choose My Adventure, the column in which you join Eliot each week as he journeys through mystical lands on fantastic adventures — and you get to decide his fate. You do not get to determine how much respect he shows to proper nouns within your gaming lore. Hey, games have made him care about these things before, failing to do so is your fault, game.
Advertisement