When I first spoke about preparing for EverQuest II’s latest expansion, Kunark Ascending, I pretty much focused only on leveling. That’s because you can’t really participate in the expansion content unless you are level 100. You can still travel to and tour the zone — and die in it — if you are lower level, as I totally demonstrated on launch day, but you can’t really dig into the content. And who wants to hang out in an expansion if you can’t do anything? Well, unless you are like me. Unfortunately, if all you focus on is your level, you might still be pretty disappointed when you enter; you may not even be able to converse with any of the inhabitants to participate in the story or do quests! I found that out just trying to chat with a nice Sokakar trainer.

Beyond reaching the level cap, there’s plenty more you need to do before you can take advantage of Kunark Ascending. You may have completed many of these prerequisites already, or perhaps next to none (a very possible scenario if your current character just speed leveled like my Arasi Fury did). This guide that will help you cross everything off that checklist so you can experience all that the expansion has to offer.

Setting aside the fact my level and gear was too low to survive the wildlife, my biggest obstacle was actually the language barrier. Because my Arasi Fury sped through the levels so quickly, she missed a great deal of content in many of the zones because she out-leveled them. And two things I missed were learning Draconic and Sathirian. I can’t even speak Goblish!

Part of this was actually on purpose: I enjoyed having a character who couldn’t speak most languages, so all of the mob chatter came in the foreign tongue. I have always loved listening to other languages, and the fact that the EQII races would actually voice things in their native tongue is a favorite little extra in the game. I’ve been a little sad each time a Heritage Quest forced me to learn a new language, and I am equally sad I will have to do the same for the expansion. But I want to play Kunark Ascending, so it has to happen! Not sure what you can speak? Check on your character page in skills under the general tab. 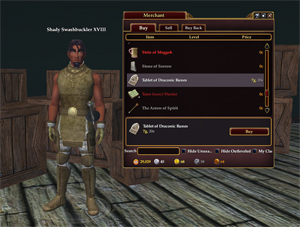 To learn Draconic, you need to do the quest Speak like a Dragon. This is a quest many folks do in the course of getting their epic weapon. It is quite a lengthy process where you have to chase down Draconic runes all over the map. You’ll need a hefty chunk of time — and no shortage of patience — to pound this one out… unless… unless you’ve already done it on another character! That’s right: If you have competed Speak like a Dragon on any other character on the same server you can just saunter over to the Shady Swashbuckler XVIII on the Nektulos Forest docks and buy the Tablet of Darconic Runes for 7g 20s. In fact, this guy will sell you a replica/replacement of any HQ reward you have earned, which is pretty awesome if you want one copy as a house decoration while you use the original. (One of the best additions ever!) Just be sure you visit the merchant as the character who completed the quest, or he won’t sell it to you. Just transfer the tablet via your shared bank and you’ve just saved a ton of time and running around.

The next language is a multi-quest endeavor. To learn Sathirian, you have to have some luck in finding pages for a collection before you can even start the actual language quest. The collection to finish is A Mysterious Black Tome found in — as you might expect — an original Kunark zone: Fens of Nathsar. Finding any one of the pages will start the collection; in total you need to gather pages 1 – 5, 8-9, and 12. You can also try to buy pages off the broker. Once done, read the book you get as a reward to start the quest Find Sethis Kai, who will be the NPC that will give you the language quest Feathers for Sethis.

If you still need to learn Goblish, it’s a much easier process — you just kill enough Goblins to have the territory markers drop. You can even kill lower level ones, so go on a spree! Note: If you already have an unread territory marker anywhere in your possession, you can’t obtain any others until you click it and actually begin the quest.

It’s no secret that I really like the Heritage Quests , so having one as a prereq is just fine by me. The necessary quest for KA is actually a series set in Fens of Nathsar called the Greenmist Timeline. There are five HQs in total, starting with The Name of Fear. Hint: To start the quest, you can either dive deeper into the dungeon with a friend (necessary to pull both levers at once to continue), or you could just harvest the necessary statue right in the first room after you log in. Then just complete the remaining quests as you follow the chain.

In the beginning of Daybreak’s announcing just what prerequisites would be required to get into the expansion, there was actually one that was necessary to literally get into it! Initially, the plan was that players would have to have completed the entire signature quest line from from Terrors of Thalumbra called the Underdepths Saga. Thankfully, this is no longer the case, as I showed by my ability to zone straight in on launch day without having done anything from ToT. However, you may not want to pass the once-prereq by as there is a rumor that having it completed could result in a bonus reward.

Also not required (but still necessary, I say) is having a flying mount — especially if you are going to dare peek into the new zone without the proper level and gear! The flying mount is vital for getting around up out of the range of all those things that want to kill you. And there are things ready to kill you as soon as you zone in! So I’d advise not trying to poke in until you are at least level 85 and have yourself some altitude options. And if you are level 100 already and don’t have a flying mount, what kind of contrary gamer are you?!?

Kunark Ascending is introducing the next iteration of Epic Weapons to game, something some Norrathians have waited a very long time for. It purports to be the best weapon in game for your class for at least the next couple of years, so it would behoove you to nab it if you want best-in-slot. However, to do so, you need to have already obtained the first version of your Epic Weapon. And like the 2.0 version is going to be, the 1.0 version is a whole lotta work. EQ2 wire provided a nice quick guide to each class’ Epic 1.0 fabled quest line. 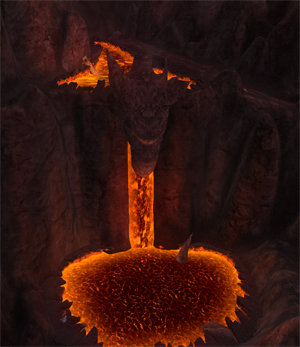 On top of all that, Epic 2.0 hopefuls will have to reach Ascension Level 5 within the expansion before even acquiring the 2.0 quest. That means working through quite a bit once you make it into the expansion.