This past week we reported on an ongoing attempt by a small group of faithful EverQuest Online Adventure fans to bring back the MMO on both the PlayStation 2 and PC. The odds are long and the difficulty high, but the passion is there for a game that these players used to enjoy.

Is it possible? Could this console entry in the EverQuest franchise ever see an actual revival, even in emulator form? Stranger things have happened.

Jeremy, one of the leaders behind the EQOA Revival project, reached out to me with a desire to talk about what made this game so special to him and why it deserves a second run nearly a half-decade after it was shut down by SOE. Ever curious what playing a console EverQuest was like? Read on!

Massively OP: What got you playing EverQuest Online Adventures in the first place? Was this your first MMO?

Jeremy: I got into EverQuest Online Adventures because of my older brother, actually! We had a good ol’ fat PlayStation 2, and we already had the modem put into the back of the it because we dabbled in a couple games like Socom and Medal of Honor Online.

We got the EQOA demo through a magazine, and my brother was the first one to try the game. He rolled a Barbarian Warrior, and I just watched him play until I could have my own turn. Like an annoying little brother does when you’re younger, I rolled the exact same thing on the demo when I finally got to play. Running around Halas was amazing. EQOA was indeed the first MMORPG I ever played, and one I hold with fond memories!

I’ve seen people say that EQOA looks like a stripped-down copy of EverQuest. How would you respond to that?

People will always find a reason to dislike a game if they really want to, but people who say it’s a stripped-down version of EverQuest are just plain wrong. For the record, there is a good reason for people to like both EverQuest 1 and EverQuest Online Adventures.

Even developers will admit they were looking for a slightly different experience with EQOA because of it being on the PS2, but that doesn’t mean “stripped-down.” You still get EXP debt if you die, you still have to adventure across a huge world, you still have to fight things, and there is still an end-game just like most MMORPG’s. They wanted to create a game where someone could sit down on their couch and play the game. They modified things like having a little more action-esque combat and quick chat commands for those who didn’t have a USB keyboard, but those aren’t terrible things if you ask me. It’s still EverQuest at the end of the day.

What did EQOA do right? What were its best features?

The best thing EQOA did right was that it was able to have that old-school MMORPG social feel. If you were a terrible person on a server, you had to live up to that reputation and live with the consequences. Your name held actions to its in-game resume that players know you by and you held a reputation and it was up to you to decide what you want your reputation to be.

It was a game in which, simply, you played as a group. You camped with other players primarily to gain levels. You met friends that way instead of having to be weird and randomly whispering people like in newer MMORPGs. Because the combat isn’t lightning-fast, it was common to hold conversations during pulls. You would get to know people and form legitimate friendships that could last.

The other thing that is did incredibly well was its world. I remember before school every weekday I would get ready for school and then play EQOA before I had to go to the bus stop. What I would do is I’d run as far as I could and then just log out of the game. It was like going through a real world. I wasn’t held back by invisible walls of portals or instances; it was my choice where I wanted to go even if it could result in pending doom. You had respect for the game world and had to learn its geography — much like on our own earth — and that was always fascinating to me.

What were some of EQOA’s faults? What were you always hoping would have been improved that weren’t?

EQOA’s biggest fault was the era it came in and the console on which it was launched. There were A LOT of great games that were out at the same time as EQOA. There were a lot of great options at the time and it was easy to miss out on EQOA.

The second thing is that EQOA was not an easily accessible game. You not only had to buy a PS2, but you also had to purchase the game, the modem, and an a USB keyboard, all while maintaining a subscription. For a lot of people, that was too many lengths to have to go into playing the game. When I played, I would sit criss-cross applesauce with the keyboard in my lap and the controller above it, so I didn’t find it the ideal way to play a game.

The third reason is probably the lack of content. They really could have added more content to keeps players entertained for longer, but at some point they just deemed it not worthy to do that. 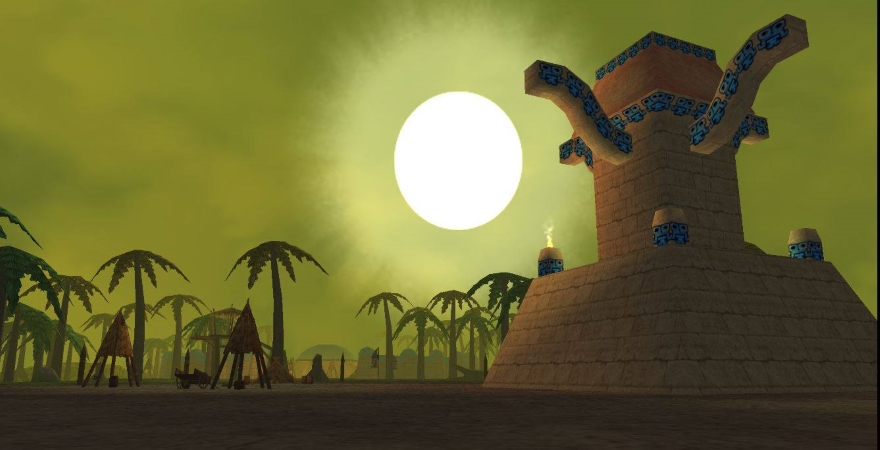 Why are you trying to bring back an MMO on an outdated console that didn’t have a huge pool of players when it went dark? Do you see a demand for it today?

First, I can’t take credit for the people who do the hard work on the project. I’m not one of the people who works on the game technically, I keep in tune with them and keep an eye on things, but I’m not the one who does the hard work. They are truly the ones to thank and glorify.

That said, I think I can speak on behalf of everyone that either roots for the project to succeed or is a part of it that it isn’t really about the dwindling player pool (as the game was dying). No one will deny the fact that SOE-now-Daybreak was not crazy to shut down the game, it’s just frustration that the studio did it.

The reason for wanting to make it playable again is because for a lot of people, that was their gaming home. It’s a game they want to play again, and they are unable to do so. There are itches they are unable to scratch. Even if they can’t play it like they used to, they would love to play two to three hours at a time and enjoy the game at their pace. There is truly no game exactly like EverQuest Online Adventures. Companies can claim they’re making games in a light towards a certain group of people, but there is still nothing quite like playing the actual game your memories are tied to.

Your revival project is also trying to bring EQOA to the PC. How would that work?

It would run through emulation on the PC. As mentioned above with my lack of technical prowess, I assume it would run through the common PS2 emulator PCSx2. However, we do not condone and we do not suggest people do this through illegal ways. We are such fans of the game that simply want to bring a game back to glory that we expect and suggest you buy the game yourself if you still don’t have your copy.

How far along has your revival project gotten? What needs to be done from here?

As twice mentioned above, since I’m not one of the people who works technically on the project, I can’t give you the specifics. I can tell you that progress IS being made, however there is no timetable for this finishing. The people who work on this technically have jobs and families and their own lives, and therefore this is a non-paid hobby to bring the game back, one that doesn’t have a time table for completion.

Why is EQOA special to you?

EverQuest Online Adventures is special to me because it was the first MMORPG I ever played. Much like the first girl you ever kissed and dated, it’s something you never forget.

Even though I played other MMORPG’s, none were quite like EQOA. The world was beautiful and huge and begging to be explored. Relying on community interaction and others to succeed is great not only in-game, but can be used as a valuable life lesson. There are times in life when you have to be selfish, but it always works better to work with others to advance yourself in life. At some point your boss or a CEO knew someone that helped him get into his position, and he probably didn’t do it through acting negatively. In EQOA, working with others in a positive manner was your best chance to succeed. All these things combined to make EQOA a fantastic game.

Thanks to Jeremy for sharing with us! If you’re interested in the EQOA Revival project or would like to help, please check out its Facebook page.

EVE Online highlights how industrial players provide the fuel for the...

Jeff Kaplan leaves Blizzard Entertainment and his position as director of...