END_OF_DOCUMENT_TOKEN_TO_BE_REPLACED
ArcheAge’s big new 3.0 update is launching this week, and some big changes are happening with Revelation. And with big changes come questions, questions about exactly what to expect when the servers come back up… including when the servers will come back up! We already learned quite a bit about the new races and regions at DragonCon. To help answer the Fresh Start Server questions, Trion Worlds has put out a Fresh Start FAQ. But we’ve done one better and sat down with Senior Producer Merv Lee Kwai and Producer Amanda Fry to talk about Revelations and the Fresh Start Servers. Be in the know before those servers start launching on Saturday, December 10th!

Even before talking about other logistics of the new servers, I had to know about the infamous cash shop. That nefarious cash shop. From little morsels of information tossed out a couple times, some players have gotten the impression that there won’t be a cash shop on the new Fresh Start servers. That’s not quite accurate; there will be — but it will be seriously limited. Fry stated, “We are significantly reducing the number of items on the cash shop, especially some of the ones people have found to be offensive — the ones that cause the greatest outcry.”

Kwai noted that players will still be able to buy patron from the marketplace as well as apex. One of the main changes he noted was that labor potions will not be sold directly in the store. Players will be able to purchase a labor stipend, which is a one-time purchase that will send one labor potion via in-game mail a day for 30 days. Additionally, the bound labor potions that you can buy for 25 loyalty points will still be available. Why the change? Like requiring a new account, it’s basically a way to keep people on more equal footing to start on the new servers. “People will pretty much have a hard cap per day on the amount of labor they can regen and use,” Kwai said.

For those who miss being able to sell your loyalty labor potions, there’s good news! A new unbound Worker’s Compensation potion will become available for the cost of 35 loyalty tokens.

Other changes include the fact that the crafting component archeum will not drop from lockboxes on Fresh Start. Kwai explained,

“We also removed pretty much all the items that are related to later-game progression or things that expedite progression. So those trees and the mining drills that produce the huge amount of logs and stone have been removed. The ability to upgrade a farm cart past four slots has been removed. You can’t buy the stellar or lunar farms from the Marketplace.”

Kwai went on to say that the whole goal was to extend the rush era for as long as possible, with the rush era being the time when folks are defining themselves and their roles, acquiring land, and such. “That’s the time for secret tree farms and all of that great stuff that’s really unique to ArcheAge.” It also defeated a dependency on the Marketplace to get ahead.

Will the marketplace always stay this restricted? Kwai emphasized that the devs will constantly evaluate the state of the server (about twice a month) to check the state of the economy, how much land is claimed, and the average progression of players. When it passes an acceptable point, some items will be added back into the Marketplace, but some items (Kwai pointed out Rumbling Saplings and Draughts of Forgiveness) may just stay gone forever. 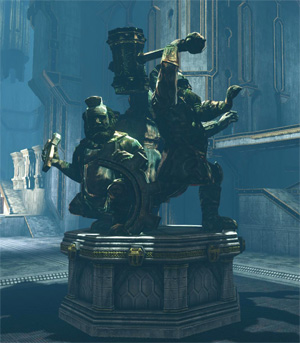 Who can play on Fresh Start

OK, now that that’s out of the way, we need to know who can play on the servers. Anyone can — provided they make a brand-new account for it. That fact can’t be emphasized enough. All legacy accounts will be unable to access the fresh start servers. Each new account must also choose whether to play on legacy (the current) servers or the new fresh start ones. Kwai stated that the segregation is a direct result of feedback from last year’s fresh start server. At that time, players leveraged their progression on the regular server to expedite their progression on the fresh start, making the fresh start servers anything but a fresh start. This is actually very beneficial to new players or returning veterans, since no long-term players can come and use their wealth and accumulated loyalty points to get a massive leg up on progression. This time around, everyone really will start on the same foot (or paw).

So what about founders who put all that extra support into ArcheAge? With a new account, founders aren’t flagged as founders. But they are, and Trion has a reward especially for them. Kwai noted that a special code will be sent to the email on record for every founder. This way the code is not tied to the account and can be applied to any account the founder wishes, be it the original legacy account or a new fresh start one. This code includes the familiar Desert Assassin’s Plate cosmetic armor as well as a the Trailblazer’s Cloak and title. In addition, there’s a very shiny golden metallic glider, which takes the place of the red glider founders received on the legacy servers.

Kwai told me that the majority of the changes, from the founders appreciate crate to the Marketplace to changes to the skills, are based on feedback over the last year. He said the team’s mentality is, “What are the biggest pain points, and how can we alleviate them?”

When do the gates open?

The devs learned from the last attempt to bring all servers online at the same time — a feat that did not pan out. This time, servers will open on a schedule, hopefully alleviating the massive crashing problem and giving everyone a better opportunity to log in and start. The EU servers will come down before the NA ones, and all servers will be offline 12 hours on Saturday, December 10th, for the update. EU servers go down at 3:00 a.m. UTC and start coming back up at 3:00 p.m. UTC. The NA servers will go down at 4:00 a.m. EST and start coming back at 4:00 p.m. EST.

Of course, there is much more to the big 3.0 update than just the fresh start servers. We already talked about the two new races, the six new regions (with all their glorious massive housing areas!), the new community centers and family daily quests, and the abyssal skill line. But Fry and Kwai shared a few more interesting tidbits.

One is the new famed rank for proficiency. This takes the top proficiency from 180K up to 230K. Once a crafter reaches famed rank, he or she will receive a famed recipe.

Speaking of famed recipes, the second tidbit is an addition to the construction proficiency. When they reach that rank, players will be able to actually craft tradeable tax certificates! Just think of it — there’s always a market for tax certs.

A third tidbit is an incentive for legacy characters to try out the new races. Players who level either a Warborn or a Dwarf to 30 can earn the Ember Nymph or Beer Fairy combat pet. These pets aren’t bound, however, and once you earn it you can trade it to your main character. You cannot sell them on the auction house though.

Thanks to Trion for speaking with us, and good luck to you and the players!