For the last couple of months, I have been focused on trying to acquire The Unseen achievement in The Secret World. Why? It isn’t anything anyone needs to do to complete the game or to even experience all the content; you can finish every associated mission even if you fail its achievement. However, it is a little extra that celebrates one of the unique offerings of TSW — the sabotage mission. It is also quite the challenge. (And by challenge, I mean something that will likely have you tearing your hair out at times.) It tests your abilities to conquer objectives through something other than brute force or a twitchy trigger finger. For that reason alone I simply must give it my full support. That, and it taunts me with its so-you-think-you-can-win-huh vibe. I must beat it; I cannot let these missions get the best of me! Also I really want the cool title and ninja face mask you get as a reward.

Since I have been running some of these missions a few times, I’ve learned a few tricks to completing them, including ways to reset them at times so you don’t have to wait out the mission cooldown to try again. These are tricks I am willing to share so maybe you can learn from my mistakes instead of making your own. You can be on your way to becoming a master of stealth. Even if you don’t want any hints per se, this guide will lead you to all the missions and those who give said missions.

Warning: This may contain spoilers! All hints and any mega spoilers will be hidden behind a spoiler alert.

To become The Unseen, you have to successfully maneuver through 19 sabotage missions, one of which actually has four separate achievements! The tasks include not being seen, avoiding traps, and not dying. One is even a timer. It certainly is no easy task, as anyone who has been following the adventures on OPTV can attest. Rarely have I managed to complete a mission’s sabotage component on the very first try. Often times it is because I got caught by something I didn’t expect, or I missed a part where not dying was also a requirement. I was  recently foiled simply by a full inventory.

Because the achievement is only tied to missions in the base game, and not any issues, The Unseen can be finished by anyone who owns the game. The missions are spread pretty much equally through the three main regions: Solomon Island, Egypt, and Transylvania. You can always check your progress to see which ones you have completed and which ones you still need to do by pressing “L” and selecting “Missions” on the achievement tab. If you don’t see The Unseen, that just means you haven’t completed any yet; it will appear after your first successful one. During your mission, you can check if you are still on track to get the achievement by checking for the yellow buff achievement icon in your buff bar. Additionally, when you fail an achievement, you get a large cracked grey icon at the top of your screen with the message achievement failed.

This starter zone eases you into the idea of sabotage missions, especially in Kingsmouth. You’ll be introduced to dodging cameras, lasers, traps, and watchful eyes. You’ll  do a little sabotage of your own. After experiencing these, you’ll have a pretty good idea of what to expect in all other sabotage missions, except they will grow in difficulty.

Mission: Horror Show
Given by: Sheriff Helen Bannerman, Kingsmouth (Police station: 187,319)
Achievement: Silent Witness
Notes: Don’t be seen. Don’t set off traps. Only the basement step is the achievement. Can be reset.
Click to reveal hints:

If you fail, you can reset it by leaving and returning.

Wear the uniform. Don’t accidentally jump out of bounds if hopping dumpsters. In the room, use the fire alarm and return to hiding in the same corner — do not run out the back door 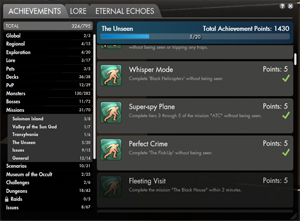 On Tier 2, can be reset by leaving and reentering. To choose correct door, listen for one without the growling.

Be ready to hit escape to close the pop ups. Use highest sprint you have. The hover-tech stealthboard can make you invisible to mobs on way to river. Also, some folks claim using the anima leap to Agartha entrance works.

Mission: The Ghosts and the Darkness
Given by: Eleanor Franklin, Blue Mountain (Franklin mansion: 848, 291)
Achievement: Cave Out
Notes: Don’t be seen until final objective. Don’t trip avoidable traps. Can be reset.
Click to reveal hints:

Can be reset by zoning out until you’ve picked up the picture. Pick up dynamite in room before getting picture in case you need to reset. If you didn’t keep your headlamp, another is available here. The final trap covering the entire hallway does not have to be avoided — it can’t)

Can use gate code or hop over fence. Best if you wear the hazmat suit. Can reset by running out of area if on Tier 2. Car alarms can be your friend.

The majority of the sabotage missions for this region are in Scorched Desert. For those involving the town, don’t be afraid to think of them as TSW jumping puzzles.

Don’t blow up trucks on groupmates! Hover-tech stealthboard can get you to many crates undetected. Can get crates from behind walls.

Mission: The Traitor
Given by: Shani, Scorched Desert (Agartha portal: 540, 174)
Achievement: Desert Shadow
Notes: Don’t be seen until final objective, or dispose of final objective without being seen by target.
Click to reveal hints:

Can disable traps through windows. If you are seen during the mission, you can kill the target without getting close by finding a spot nearby with a loaded sniper rifle. 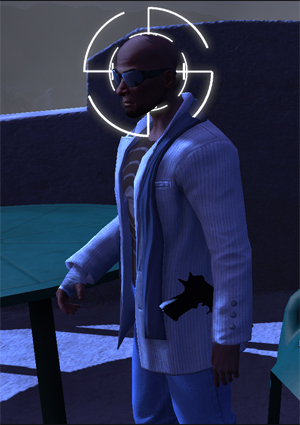 Disable radios, don’t kill. Can reset by leaving canyon if you haven’t neutralized first radio. Utilize distractions. Place final explosive from below — jump into range to avoid the steam.

Filth pods are hazards. Can shoot them to set them off before they hit you.

Mission: From Carthage to Cairo
Given by: Tanis, Scorched Desert (Cafe: 549, 448)
Achievement: Invisible Footsteps to Cairo
Notes: Don’t be seen. Only instance is the achievement. Can be reset.
Click to reveal hints:

To reset achievement in instance, zone out and then go back in.

Mission: Halls of Lost Records
Given by: Nefertari the Younger, City of the Sun God (Near Corrupted Gardens: 332, 427)
Achievement: Silence is Key
Notes: Don’t die. Don’t be seen by transformed Orochi soldiers until you get all the keys.
Hints:

Transformed Orochi have bad eyesight, so just stay behind or to the side a ways. Or use Hover-tech stealthboard for parts. Also, don’t engage during the assault phase — let the guardian keep aggro.

In the beginning stages you can escape being caught by the cameras if you hurry and get caught by the roving security the moment you hear the camera beeping; it will deposit you outside the gate with your achievement buff.

The final region has the fewest sabotage missions to compete… unless you count the one actually equals four! To complete Romany Holiday you actually have to successfully complete all four achievements in The Cost of Magic. Luckily, they don’t have to be done at the same time or in any particular order. Even setting aside the achievements, this mission is one of the most reviled for its frustration factor.

Although an instance, cannot be reset. Jumping puzzles for the win.

Mission: The Cost of Magic
Given by: Zaha, Besieged Farmlands (near The Perch: 475, 875)
Achievement: Romany Holiday (includes: The Blood Thief, Sleight of Herb, Ghostly Valentine, and Like Pulling Lupin Teeth)
Notes: Each challenge can be done independently of others. Can be reset.
Click to reveal hints:

The first three can be reset by leaving and returning to area. Do not do in group (one will not get achievement). You may want to disable sprints if you jump too far. 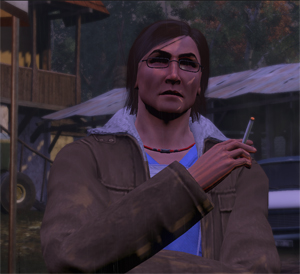 Mission: The Cellar Door
Given by: Silviu Dimir, Shadowy Forest (Dimir Farm: 1075, 1095)
Achievement: As Above So Below
Notes: Don’t be seen. Don’t die. Don’t set off any traps. Can be reset.
Click to reveal hints:

Can reset if on same tier as entering instance — not if you advance.

Can reset by leaving and returning to instance.

Lord of the Rings Online dev explains the rationale behind hub-based...