The Thieves’ Guild might have a somewhat generic name for what it’s doing, but I find it makes far more sense in any world than a guild of assassins. It’s the organized crime syndicate, and while it plays nicer than most organized crime, at the end of the day it’s the sort of group that makes logical sense. They keep tabs on one another, they work together, they try to avoid kicking up too much of a fuss to the point where law enforcement has to get involved.

Last week’s vote for my destination in The Elder Scrolls Online very narrowly favored the Thieves’ Guild over the murderhappy Dark Brotherhood, so I happily said farewell to the Dark Brotherhood while thanking them for the knife and went on my merry way to a long, long route toward my next destination. Seriously, I had to traverse quite a bit of land to meet up with Quen and get in on the theft of the MacGuffin. This time, it was a skull.

Aside from purchasing a kicky new haircut (in the hopes that wanted posters would no longer be as likely to resemble her face), Ceilarene also picked up a mount from the Crown Store. The game’s mounts are… well, there’s the core of a neat system in there. Each day, you can put some time and effort into training your mount, giving it additional stamina, additional carrying capacity, or additional speed. You can raise each one a little bit on a 20 hour cooldown.

The core conceit here is neat enough, but the execution left me pretty cold, not least because it’s the sort of thing you want to be doing immediately but the game never tells you about it. There’s nothing pointing you in that direction, no helpful reminders that this is a thing to do. And until you have some boosts on there, your mount is pretty well useless, except for the fact that sprinting doesn’t deplete your stamina while you’re on horseback.

I find this to be kind of a long-running problem with the game, which I also noted on Twitter. Compared to a lot of other games, TESO doesn’t go out of its way to point out that lots of things even exist, meaning that you either stumble upon them or ask long after the fact. I could have been coloring my gear ages ago, but there was nothing to point in that direction.

Regardless, I roved out in search of Quen, and after a few minor mishaps on the road (such as running into one of those random events in the world that have a different name than “death rifts” but which I always think of as “death rifts” because they play exactly like those) I arrived at the docks and ready to depart. Quen, for the first time, was an NPC I genuinely liked somewhat; she seemed like an actual person more than the majority of other cast members.

What followed was another mission of delving into a secure area, and this was… somewhat less mechanically engaging than the Dark Brotherhood’s mission, simply because that mission let you take whatever approach you wanted. Feel like smashing your way through things? Go for it. Stealth and takedown? Fine. Stealth without more killing than absolutely necessary? All cool.

Not so with Quen’s heist; here, either I was sneaking and very occasionally stabbing someone in the back or I was dying. Those were my options. And it’s not that it doesn’t make sense, since this is the Thieves’ Guild storyline rather than the Smash It All And Loot The Rubble Guild, but it does mean a whole mission of playing around with the somewhat dodgy stealth.

Making my way through to the MacGuffin, Quen and I were both set upon by Inspector Javert’s slightly more Arabic cousin and told that we were under arrest. At this point, you have a choice between leaving the MacGuffin or fighting your way out, but I must confess that I tend to doubt it makes much of a difference. I chose to keep it, just the same, because if I’m going to do the time, you know?

Quen and I escaped through some underground tunnels and wound up in Abah’s Landing, at which point all was immediately forgiven because this is my jam. Yes, it’s all very much a case of medieval Arabian countries run through the Gygaxizer to make it slightly less historical, but I find it hard to care when this is an aesthetic I like this much. Silk curtains, obsequious merchants politely threatening and haggling, the hot sun baking the stones of the city as you recline beneath cool alcoves.

Unfortunately for me, the quest drops you off at a point on the harbor rather full of guards, so I was quickly divested of my (sizable) haul. This would be one of the few complaints I have; it’s a touch unfair that you really have no chance to divest yourself of your wanted status no matter how well you’ve planned, and your only real option is to do something rather game-ish like recalling from the docks immediately. Still, I turned in the quest and started in on the primary storyline.

Not entirely to my surprise, it turned out to be… pretty good. Yeah, faked you out there.

Part of it is just that these characters wind up needing some personality by the very nature of the story, so they finally graduate a bit higher than functional ciphers. They’re thin sketches just the same, but it’s a decent mix of people who are all equally dysfunctional but in different ways. Since everyone’s motivation is pretty easily established (everyone wants to get rich and not go to jail forever), it’s more about watching their personalities play off of one another. 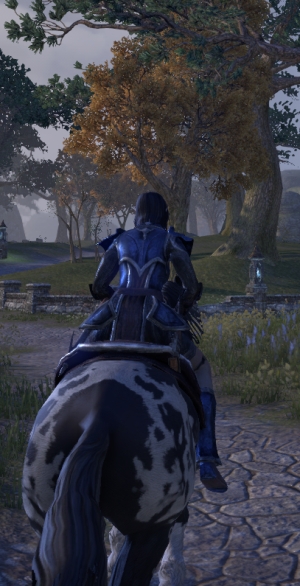 Plus, it does a decent job of capturing the atmosphere of a scenario where no one actually trusts one another, but they sort of have to trust one another at the same time. You get the sense that betrayal is going to involve less backstabbing of the literal sort and more absconding at the worst possible moments.

One thing I am noticing that works against the game is that while it goes for a very “less is more” approach with quests, most of these installments feel lengthier and weightier each time I log in. This is not inherently a bad thing, but it does mean that I don’t have the same sense that I can jump in and do stuff for a little while before leaving; if I want to make significant forward progress, I need to plan out a longer session. That’s not precisely a weakness, but it’s not a strength, either.

I would love to dive more into the world of the Thieves’ Guild and see everything that’s on display in the area, as I’m quite enjoying it. However, I also have just one week left to go, and I think it behooves me to go a bit further afield this time. I’m also high enough to take on the game’s PvP, which in the early days of the game rhymed with “endgame,” so I want to open up a full range of options to everyone who wants to vote.

CMA: Where shall I go for my final week?

Additionally, I thought it would be interesting to gauge opinions on the housing reveal from last week.

CMA: Are you excited for housing?

As always, the polls close on Friday at noon; I realize that gives y’all a little more time to vote than normal, but seeing as how this is the last week and we’ve had some pretty close votes up until now, that seems only appropriate. So get those votes in, let me know what you’re thinking, and tune in next week for the end of Ceilarene’s adventures! Followed by one more column about the game. Yeah, it’s not exactly conclusive.

Welcome to Choose My Adventure, the column in which you join Eliot each week as he journeys through mystical lands on fantastic adventures — and you get to decide his fate. In this case, his fate involves being out breaking rocks in the hot sun.
Advertisement