All good things must come to an end, and in this case, my adventures in The Elder Scrolls Online are ending in Orsinium. I’ve done some stealing, I’ve done some murdering, and now it’s time for me to do some dealing with the dark and sinister work involved in building a nation out of nothing. Or close to nothing, anyhow. Hammering separate tribes together is never easy work.

It only gets harder when it turns out that the person responsible for hammering those tribes together may, in fact, be an ego-tripping maniac who shouldn’t be given authority over anyone.

Of course, there’s more to see in Orsinium than I could get to in a week, even if I wasn’t in the middle of the holiday time crunch and so forth. But I did manage to at least get a high-level tour of what the region is all about, and I do agree with people who said that this was definitely the sort of thing that should be seen before leaving the game. 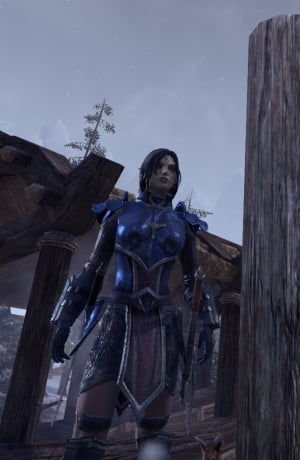 The Orsinium story starts, appropriately enough, with ambassadors from Orsinium heading out to recruit a mercenary force to help King Kurog defend and strengthen Orsinium. Sure, he’s already ostensibly got allies… but he’s also very aware that as soon as the Pact and the Dominion aren’t kicking down the door, the Covenant is going to collapse, and his allies are exactly the people who are going to be invading Orsinium first and foremost. That is the sort of thing I like; not prophecies, not reams of lore, not absurd organizations that make little to no sense, but political situations being brought out to their logical conclusion.

Of course, as soon as we land in Orsinium, it turns out that the Orcs are being besieged by men of the Reach and they’re not quite as unified as Kurog might like to say. The quests make it pretty clear right off the bat what’s happening. Kurog is definitely a capable commander and soldier, and he’s got some progressive ideas about forming the Orcs into a more modern and unified society. At the same time, he’s also pushing a lot of chiefs outside of their comfort zones, and he’s not exactly unwilling to benefit from the established traditions so long as he can find a way to twist them to his agenda.

As a result, there’s a real mix in the city. You have outsiders, most of whom see this as either a job or a quick excuse to make money off of the locals. You’ve got more “savage” orcs who still want to stick with traditional methods. You’ve got cosmopolitan sorts who are quite comfrotable getting involved with the business of commerce and business. And you’ve got the orcs who are pretty well screwed in “traditional” orcish society who see an easy out.

The result is a neat cocktail of points thematically. The intro quest sees you dealing with an Orc who sold out the supplies for the clans to the Reachers, but he claims that he just has no interest in supporting the clans that oppose Orsinium and stymie progress at the cost of the Orcs within the walls. There’s no clear heroes or villains, which I appreciate.

I mostly stuck to the main plot thread, which saw me heading out to the Winterfell stronghold to help Kurog break the Reachers and consolidate his power. The result is an extended period of time working alongside Kurog, which was… a little bit obnoxious. It also featured one of the most annoying quests I’ve had the displeasure of doing in the game to this point, involving a giant tree you have to set on fire and more deaths than I have experienced in the game up to this point. Kurog loved to run off and aggro more things, various enemies around the tree kept respawning and needed to be killed, and the whole thing was just an exercise in irritation.

Perhaps it would be less annoying if I had a different build than I have, but that’s purely speculative. It sucked, that’s the point.

Needless to say, Kurog and Ceilarene succeeded at killing the enemy leader, which naturally means that the main bad guy is dead so everything is fine now. Once Ceilarene hopped back to Orsinium, Kurog happily explained to the assembled chiefs that he had killed their enemy with the help of an outsider, so now it was time for everyone to be totally all right with him as king.

The chiefs did not agree, so he murdered one of them promptly, which is exactly the moment that you can’t help but realize that maybe this guy is not actually great either. That is, however, not a bad thing. I consider it a refreshing shade of ambiguity in the game.

I should also give proper credit to the land around Orsinium, which reminds me a bit of Batallia Downs from Final Fantasy XI with its ruins and general run-down nature. It’s the sort of space that seems to have been so thoroughly pummeled to bits over time that it’s become perpetually half-dead, a land of yellowing grass and overhead haze that doesn’t naturally give itself to smiling or good times. It feels like the right setting for what’s unfolding, unfriendly without being a simmering cauldron full of evil. 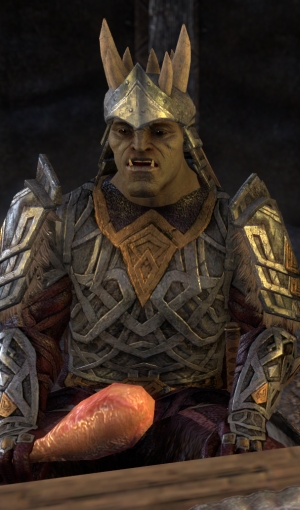 Having played through some of the DLC, I can see why some people were a little less warmed by it because on the one hand it really does feel like a pretty by-the-numbers Orc Story for a generic fantasy setting. You have separate clans and someone struggling to unite them, you’ve got traditions that are clearly meant to serve as stand-ins for various primitive traditions, it’s all pretty predictable. If you’re trying to convince someone of the worth of ESO in terms of originality, this is not the place to do it.

What it does do commendably, however, is take the generic elements and polish them up rather nicely. Sure, all of the elements are familiar if you’ve played any game with orcs involved, but the actual execution has panache, and it manages to really sell the idea of having all these various ideologies butting up against one another. Its weakest point is probably having your Generic Evil Shared Enemies, but even that is more a function of needing someone to beat up on than a major storyline concern.

Of course, there’s more to be done in Orsinium… but unfortunately, I won’t be doing it at the moment. My time and Ceilarene’s journey are both over for now, and it remains to be seen if perhaps it will be picked up again. And I could explain why in more depth, but… well, that’s better suited for the final column of the year, I say.

So this is the end of our time in The Elder Scrolls Online, but it’s not quite the end of my words about the game. Next week, I’ll be looking back over the past four weeks before offering you another set of games to choose between to send me adventuring through once again. As such, there’s no poll this week; you’ll just have to vote for my next destination before we reach 2017. Feedback, however, is still welcome in the comments below or via mail to eliot@massivelyop.com.

Welcome to Choose My Adventure, the column in which you join Eliot each week as he journeys through mystical lands on fantastic adventures — and you get to decide his fate. It is increasingly obvious, however, that he will not be the one to unite the clans. Which clans? Who knows. He won’t be uniting them regardless..
Advertisement