The Secret World, I’m shaking my head at you. I mean, I wasn’t expecting anything really for the Krampusnacht holiday. But this?

Remember back when I stated that I would gladly give up new Christmas season content in favor of an amazing Samhain story event? Well, I didn’t say please lock the content behind a double dose of a paywall and RNG! But that’s basically what happened this Krampusnacht. The 2016 event has one single new bit of content, a new snowball fight minigame. That in itself is pretty awesome. Seriously, the game is fun. The catch is that it isn’t something that’s freely accessible to all players. Worse, the season’s achievements are tied to it. As I have ranted in years past (like when EverQuest II locked Frostfell content behind a new expansion), I firmly believe holiday content should not be available only for those who pay extra. Holidays should be something all players can participate in, be they rich or poor, vets or newbies. Everyone.

Thankfully there are a few alternatives available. However, even these have kinks making it difficult for some folks to participate. Here’s the scoop on this year’s event, the problem it generated, and a few solutions that could help.

A snowball’s chance with Hel

New content is always fun, and when I heard that Krampusnacht 2016 included a snowball fight minigame on top of all the returning events (yes, Niflheim, the End of Days, and Christmas Conspiracy are all available this year), I was pretty excited.  Even the fact that it wasn’t any big story mission wasn’t a damper on my enthusiasm. After all, it sounded like a creative and unique little activity. While anticipating the start of the event, I wondered what exactly the minigame would be like. Would it be a new PvP match in its own arena? Would it be a version of an arena already in game? I mean, just think of playing Shambala with snowballs as your only weapon! 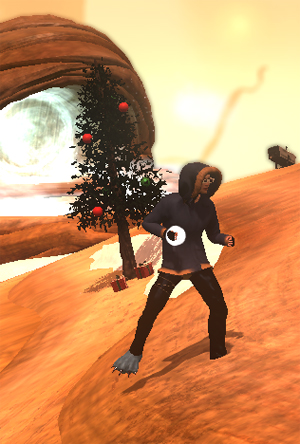 The snowball fight turned out to be nothing like either of those ideas. It is actually a game that can be started almost anywhere in TSW, with the exception of raids, dungeons, and PvP arenas. That means you can begin a fight right at the feet of Hel herself! (That might make things tough since she’ll be be doing her darndest to kill you which will undoubtedly affect your aim.) There are many interesting places you can stage your battles; we had fun playing a few rounds in The Black House.

You start with an item aptly called Pile of Snowballs. Using it places said pile on the ground that anyone can then gather snowballs from. It is awesome that you don’t need to be in a group to participate in this game; any random person walking by can pick some up and join in the fun. This can make for large games, which is much more fun than just a couple of players. (It’s also way easier to get points with more targets since not everyone is directly focused on you!)

After picking up your ammo, a short timer starts and then the game begins. You have three skills available, a rapid-fire shot, a long wind up shot, and a snow fort. The goal is to get as many points as you can: A landed quick shot grants one point and the powerful shot grants five. That powerful shot also knocks your opponent over, cancelling whatever action s/he was in the middle of. The snow fort, however, will protect you from being knocked over. There is only a bit of strategy to the game, mostly involving breaking line-of-sight (as those snowballs can defy physics to hit your target) and dodging at the right moment. Just be sure to only toss at people with the big snowflake over their heads indicating they are in the game, otherwise you get no points and waste all your time! Amid pelting everyone, you may want to be sure to hit one of each faction, as doing so for the first time will grant an achievement. There’s also an achievement for scoring 75 points.

The activity itself is quite fun. It was creative, and I really appreciate that the devs provided not only something new to do this season but something really new. What I think could be improved upon is the accessibility.

When I first logged into Krampusnacht, I eagerly sought for the snowball fight minigame. I couldn’t wait to play and to show it off on OPTV. After no clues as to how and where to start it up surfaced, such as the text messages sending you to the start of other holiday missions, I asked the community how to get in on the minigame. This is where my enthusiasm was crushed by a kink in the system. You see, the answer I got was you that had to buy the new bag in the cash shop and get the item as a drop. Not only that, but the drop is random. At this point, I was sorely disappointed because my RNG luck is pretty abysmal. Folks saying it dropped frequently was no consolation; in fact, I have yet to get it as a drop from any bag I’ve purchased! This, as you might expect, set me off on a bit of a rant. The only new holiday content is gated behind a paywall and RNG?! Not OK. With my luck, how the heck am I ever supposed to get to play? How many bags will it take for MJ to get a Pile of Snowballs? As of right now, I still haven’t gotten one!

Well, I consoled myself, at least maybe once I finally get the darned thing somehow I will have it to start minigames. No, make that minigame. You see, the item is a consumable, meaning it disappears once you use it! So wait, not only do I have to have the luck to get the darned thing once, but I have to get it multiple times? Yes, at this point I was pretty frustrated. I just wanted to take part in the event. OK, well maybe after I spend enough to finally get all the achievements I will get a permanent version that I can use for fun throughout the year. Alas, disappointment again: The reward for reaching 75 points is a snowball emote, but not the minigame itself. 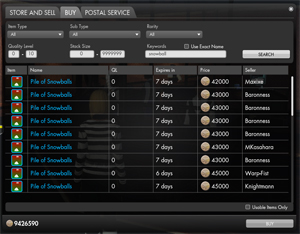 All is not lost. On a positive note, I was able to learn that there are alternative ways to participate other than buying the cash shop bag. You can just hang around and hope that someone else with better luck than you places a snowball pile so you can join in. Yah, this involves more RNG and luck, which makes it less than ideal for me. Luckily, someone was nice enough to place one for us after I’d asked and we had our first fight in Agartha. But to have the chance to pick your battlefields, you need to have your own pile of snowballs.

You can also buy up to two of the Festive Grab Bags a day from the Yuletide Peddler in London. Located in Darkside next to the lucky coin vendors at Coal Walk, he offers each bag for 300,000 Pax Romana or 250 Black Bullion. This doesn’t do anything about the RNG, however; my horrid luck is still going strong. It also doesn’t help newer players who don’t have huge stores of Pax or Black Bullion to draw on, effectively putting them at the mercy of others starting games near them or forcing them into using the cash shop.

The best news is that these Piles of Snowballs can be traded, meaning your lucky friends can hand you some (if they are feeling extra generous this season). You can also buy them off the broker. That’s how I finally ended up getting a couple fight-starters for myself. Again, you need the funds to be able to go this route. Luckily the prices haven’t been too unreasonable — they are much cheaper than buying a bag and you totally forgo the whole RNG part. However, I do thing there should be a way that in-game effort translates into the reward as well. 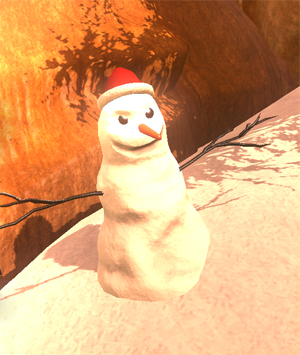 Now let me reiterate: I am very appreciative that there are alternative ways to get the snowballs. I just think that Funcom should have gone a bit further to make them better accessible to all. I think there should have been another in-game way to acquire the piles of snowballs so that those who don’t have cash to throw around, be it real money or in-game currency, could still more fully participate in the holiday festivities if they just invest a little time. Taking a page from the Doomboard challenge, how about making a pile of snowballs a reward for completing a certain number of daily or weekly achievements? Would it be too difficult to tack that reward temporarily onto the five or 15 challenges completed achievement already there?

And what about making this item permanent? I totally understand the drive to sell bags (I buy plenty myself), but going for the cosmetic items alone is good enough for that. Maybe devs didn’t think this would be something players would have fun doing long-term so they didn’t even consider it. But it is fun! I want to be able to do it more often, even if there was a long cool-down timer associated with it. It is a cool minigame and I totally want to play it more often than I have the chance to as it stands now. Maybe next year there can be a permanent version of the item. I’m adding that to my holiday wish list!