Back when I played through The Elder Scrolls Online’s beta, I said that it was another generic fantasy MMO in a field already choked with them. The latter part has not changed. The question, then, is whether the former part has changed, whether the game has truly risen from its somewhat inauspicious beginnings to really carve out its own identity as a game, independent of simply relying upon the franchise name.

I certainly have warmer feelings toward the game now than I did when I played through the beta. The game’s combat has undoubtedly been improved, and it cannot be overstated how much One Tamriel helps the game as a whole. Without feeling like I have to stick to a very narrow range of things to be done if I want to level, I always felt as if I really could head off in a direction and find what interested me, which is a good thing. The problem, of course, is that “interest” often requires investment in a setting, and that is… troublesome. 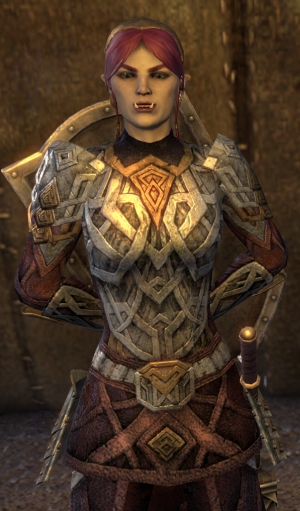 A rather insightful review covering a Dungeons & Dragons sourcebook once claimed that the game tends to fall victim to the Curse of the Catalog: When tasked with describing something supernatural, the game simply provides stats and rules instead of providing any of the feel of the thing in question. It makes sense, when you think about it; you can have a robot that is hard to kill and has high skills in subterfuge, but until you see The Terminator you won’t see how you can make that same thing into a relentless force of nature. Or compare the stats of a shark to the almost mythical dragon terrorizing the waters in Jaws.

The Elder Scrolls in general and ESO in particular seem to fall victim to this same affliction. One cannot say that there is not a great deal of lore because there is. There are piles of lore all over the game world, books that you can sit down and read through in detail. There’s a whole lot of details on everything. But at no point does most of it start to intersect into an actual setting of people to care about.

Or, to use something that I myself wrote, the gap between story and lore is that lore is the background and story is the foreground. ESO has plenty of lore, but it leans on that instead of giving you compelling, persistent characters whom you can root for. It has a whole lot of prophecies and Big Foretold Events without a whole lot of story motivation, without much engagement from the player. If you like lore more than story, you’ll have a field day, but it rarely manages that emotional connection.

Part of this is because the game is set in an interstitial period in the franchise’s history, so there’s a certain amount of stuff that can’t really be altered; right off the bat, you have to have the game fit into existing spaces. But part of that is just what the series has always been more concerned with, hoping that you’ll create your own emotional connection in the blank spaces provided, as if you wouldn’t do that with more focus on creating a personal connection regardless.

There’s a lot of detail about the setting, but ultimately, it doesn’t get much better. Its storytelling never elevated above “decent,” although there were bits and bobs here and there that I did quite like and noted. 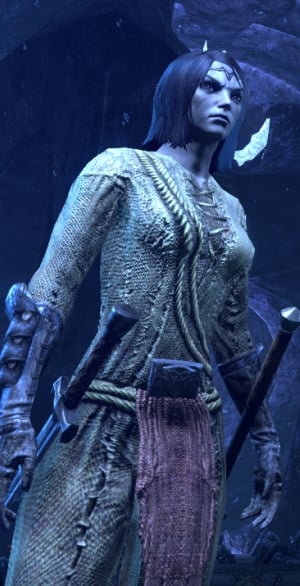 What is to its credit is that the storytelling never falls below a certain threshold, either; even at its least coherent, the quests are still straightforward and at least moderately enjoyable. The game is content to let its mechanics carry the show most of the time, and that’s a mixed bag, but not a wholly unsuccessful one.

By the time I stopped playing, Ceilarene had begun to fall into a rut; her main skills were all in place, which left me approaching most every battle with the same focus. That, however, is a threat that’s always there in games with open skill systems when you go in with a known goal. It’s not precisely a failing.

Combat still feels a bit floatier than I would like, but it does feel like the time since launch has been used to really shore up the fundamentals. Skills feel useful and fun to break out at this point, with lots of options for evolutions and differing playstyles. Swapping weapons also provides for a more robust set of options once you pass level 15; it could be argued, in fact, that it’s best to take a break from your “main” weapons and move on to your secondary options once your skills begin to stagnate a little, although that’s not an option I personally went with. The point is that you always feel you have options and tricks that can work together, even if some take a bit more massaging than others.

Outside of combat, the game’s systems frequently require long-term commitment; I mentioned the way that mounts work as the sort of thing that demands constant play and almost requests you to be dealing with mounts from the start of the game onward. It’s not that they’re bad, but they’re the sort of thing that demands daily devotion, something I waffle on. I like long-term projects, but I also like feeling that I can miss a day without missing something hugely important.

There are also some baffling omissions; the fact that the game still is insisting upon not having a central auction house while also having a very crafting-centric item game is like telling people to focus on doing everything for themselves instead of relying on others (or relying on closed guilds instead of the broader community). It stymies interplay unnecessarily. And that’s not even getting into the game’s insistence on having single quests that require extended sessions just to finish up, which means that I’m more likely to get worn out and clock out after a single quest rather than after several…

But then, we’re getting housing, which is great. And the stealth system, while not perfect, can be pretty fun on its own. I keep going back and forth, and every time I find something that makes me put my head in my hands and sigh with frustration, I find another element that I can nod appreciatively over. Some things are even conscious choices that I may disagree with but still recognize as valid, such as individual quest length.

In short, a lot of what made the game feel generic back during beta hasn’t really changed. But there’s also a lot of stuff that works now that didn’t work as well before, and the numerous bits of DLC have nicely patched things up and provide more diverse options for players. It’s not the sort of game I would put down as a regular title for me, but it is something I wouldn’t mind dipping back into again.

And hey, that’s a good thing. There are areas where it fails, but there are also areas where it succeeds nicely, and I am more than happy to celebrate it for the latter. I saw a lot of weaknesses while I played, but I also had fun with it from start to finish, and I never found myself reluctant to go back. So good show on you, TESO; you really stepped up to the plate and did well by yourself.

Shame that it’s still so impossible to make a decent-looking character in the creator, but eh, baby steps.

Yes, we’re moving on ahead once again with new places to go, and that means choosing a new heading. Black Desert Online, for example, is back on the poll once again; it lost out last time to the overwhelming might of The Elder Scrolls Online, but it does have momentum. And it does all right for itself in our awards this year, to boot, so it definitely deserves a second shot.

I am sad that the Dark Knight will not be around for this, as I do generally like knights and the darkness thereof. I’m not in love with that outfit, though.

Of course, there’s always the real possibility that you folks like sending me to franchises I’ve never had much use for, and surprise! Lord of the Rings Online qualifies. I’ve never cared much for the books or the films (I adore The Hobbit as a book, though I’d as soon pretend the needlessly stretched films don’t exist), and the game has never really had its hooks in me. But some big stuff has been happening with the game; now might be a good time to check in on the state of things.

Sure, it’s an older game, but I’m pretty sure I can get to Mordor in a day. One does not simply walk into Mordor, but one can accelerate toward it at high speed.

Speaking of surprises, Riders of Icarus did surprisingly well in the last poll before ESO turned its gaze to the polling. I know very little about the game beyond the fact that it’s a free-to-play title with lots of mount stuff going on, but considering that strong showing, it deserves another shot as well. So both of the losers get to come back for another try. (This will not always be the case.)

Last but not least, we’ve got ArcheAge, which has managed to be in the news a lot recently, but not generally in a positive light. Still, it has recently rolled up a totally new start for players, and it seems like the right time to check on the title now that the initial launch and immediate backlash has faded.

Assuming, of course, that I can actually log on. That’s always up in the air.

To the voting! And as always, voting closes on Friday at noon, so vote early and vote… well, not often. Just the one vote is counted.

CMA: What's the next game to be featured?

That’s all for this week (and this year), but I’ll see you in 2017 with a new game on deck. As always, feel free to leave your feedback down below or mail it along to eliot@massivelyop.com. Oh, and please drive responsibly this weekend. Just for safety’s sake.

Welcome to Choose My Adventure, the column in which you join Eliot each week as he journeys through mystical lands on fantastic adventures — and you get to decide his fate. You also get to complain when he doesn’t like the things you like. That was always inevitable.
Advertisement