The cat is out of the bag. Or should I say Manticore? SMITE Rivals was announced at Hi-Rez Expo 2017 yesterday, giving players a third option for playing the gods in the SMITE IP. But the night before the world found out, I had the opportunity to sit down with a few of the folks who are creating the game and not only learn about it but play it for myself! (And no, I didn’t break it!)

So what is SMITE Rivals? It’s a game that blends the original MOBA with a collectible card game. Now, folks who have come to know me know that for the majority of my gaming life, MOBAs and CCGs both have terrified me. Maybe terrified is too strong of a word, but I definitely avoided them. I was both unfamiliar with them and unskilled. It’s only been this past year that I have started dabbling into these realms. So what happens when you combine these two fears into a single game?

It turns out, I love it.

MOBAs and CCGs, sitting in a tree…

I’ll admit that when the devs first started talking about the game, I couldn’t quite envision it. It was a bit of a “need to see it to really see it” situation; I had nothing to base any visualizations on. Still, I was curious to see what the Hi-Rez team would bring to this genre. With other games already out there, why would players join in this one? The answer lies in the coupling of the two different types of games.

What does the child of a MOBA and a card game look like? In the case of Rivals, it is a three lane field where two players face off, each with three phoenixes and a titan. The whole objective is to rush over and destroy your opponent’s phoenixes and titan while protecting your own. The purveyor of the most destruction is the winner. All actions are dictated by playing the four cards in your hand.

The deck is composed of one god and then seven other cards in any assortment of spells, structures, and minions. You can make your payable deck an intricate combination of synergies, or you can just pick which cards looked cool (or had fire involved).

A different kind of fun

I have to say straight up that one of the things that draws me into a new type of game is when there is A) a PvE mode where I can learn without handicapping teammates and B) some interesting or unique property that intrigues me. OK, there is also a C) if you have killer bunnies. I tried SMITE previously, but it wasn’t until the Xing Tian’s Mountain PvE Charity Challenge that I began to really enjoy the game. And once I was learning and feeling more comfortable with some gods, I was more inclined to play the other modes (though I still shy away from the three-lane mode). I also got the courage to start my journey into CCGs because of a PvE campaign that included killer bunnies. The next card game I tried because it was a unique blend of a board game. Rivals met the two requirements. (I’m still working on the devs to get killer bunnies in.)

While I had no I had no particular inclination either way regarding playing the game other than to satisfy my curiosity, things changed once I got my hands on it. In a nutshell my first impressions went like this:

As expected, I lost the first match as I didn’t even know the game had started let alone what was going on. However, I did win the second. And then for my next game I became the first person to defeat the currently overpowered AI’s titan. That move even surprised the devs!

How did this game grow on me so quick? The fun factor almost instantly surpassed that of the MOBAs and CCGs combined for me, all in less than 10 minutes of play. This was especially surprising, especially given how unfamiliar I was with the game. It breaks down in the actual features of the game.

Ironically, the one thing I thought would turn me off of game actually became more of a selling point. The matches are only three minutes long — unless you go to sudden death and add a bit more — so the action is actually fast and furious. Fast as in no time to think and oh my gosh what the heck am I doing? That lack of time to think, coupled with not knowing what anything was or did, initially intimidated me. I was sure it was a recipe for disaster: In other card games, I tend to sit back and really think out nearly every play. Sometimes I overthink them. I even get paralyzed by the decision. In Rivals, delay will seriously cost you, as I learned in my first game. It is basically better to just toss things out than sit back debating back and forth about your move. I couldn’t afford to be paralyzed by indecision, so i jumped right in. The game where I let instinct guide me is actually the game I trampled the AI in; the other two where I started overthinking moves I lost. 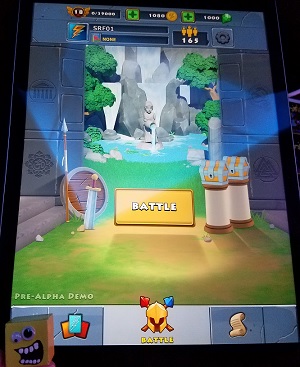 An extra benefit to the quick time is that if things are going really poorly, at least you know it will be over soon! I think the quickness of the matches also lent to a desire to get back in and try again, much more so than had I just spent the last 15 minutes getting my wings/tail/whatever handed to me.

Another key element that I enjoyed was the deck building. As much as I have been enjoying HEX, I am still extremely intimidated by the decks. I have to be the opposite of a min/maxer; my brain just doesn’t enjoy trying to figure out the best synergies from a pool of hundreds upon hundreds. And I’ll admit that I can’t remember what over half the cards in my actual playing deck are let alone all the ones I own for building. So SMITE Rivals’ deck size of eight was actually pretty exciting to me; eight cards I can keep in mind and learn the ins and outs of much better. And when your cards are popping into your hand fast and you have to play fast, knowing them well is pretty crucial

The small deck size also allows for both a low bar of entry for new players (like me) as well as ways to build customized and creative decks incorporating serious tactics and strategies for the more advanced players. I really enjoy when a game isn’t geared for only the tippy top of player skill.

Another reason I really fell for this game? I just loved it visually. It isn’t so much the art style (though the whimsy makes me smile and feels like I am going into battle with an army of plushies); I really got a kick out of watching the battle play out on the board. It amused me to watch the harpies fly down in formation, the minions bust out of the Trojan horse, and the bomb cyclops smashing, and the Manticore munching on whatever got in its way.

I am honestly sad that once the expo is over, I will lose access to playing this game. Currently, there are four stations set up where players can face off. So far I have gone and played some matches every day of the con, and I plan to continue that until the doors are closed and locked for good. There is just something really satisfying about the clash of the plushies.

Oddly, even though the game is also coming to the PC, I actually think I will continue playing on a tablet. Personally I think the swiping of the cards into play actually contributed to the rush — both of timing and adrenaline. Clicking or using keys just won’t feel the same. I also don’t want to play on my phone, because a good chunk of what amused me was actually seeing the action play out and the phone screen is just too small for that for my tastes. That means either I need to get my Nexus 7 back up into regular operation, or I will need to put something like Bluestacks on my little Windows tablet/laptop so I can play the Android version there.

Speaking of the PC version, there’s more to say on that front, as well as about the game’s development, so be sure to stay tuned for a run down of the dev interviews this weekend!