By now, it might be apparent that I am a bit enamored with the upcoming cross-platform SMITE Rivals. (Hey, it’s the only game I active seek out PvP in!) I’ve certainly really enjoyed playing the game; it is fun and not just a little addicting. But I have also enjoyed talking with the Project Lead Brian Greyson, Producer Randy King, Lead Designer Chad Wilson, Tech Designer Colter Cvach, and Designer Sean Watson throughout Hi-Rez Expo 2017 about the game. From formal interviews to informal conversations to quick chats between matches, we tackled topics like the copycat concerns, design decisions, tactics, and the future. I even tried to learn more about monetization — a hot topic in the online gaming community right now. Read on!

Let’s get to it: As it did with Paladins, the gaming community raised questions about whether or not SMITE Rivals is just a copycat game of popular mobile game Clash Royale. I discussed the topic at length with both Greyson and Watson. I looked into it and discovered through watching gameplay clips that there are indeed visual similarities. Having not personally played that other game, however, I couldn’t comment on any of the deeper gameplay. Greyson acknowledged that he played many mobile games, and Watson noted that he has actually played Clash Royale, so I asked each of them about those visual similarities and whether the similarities also went deeper into the actual play of the game. 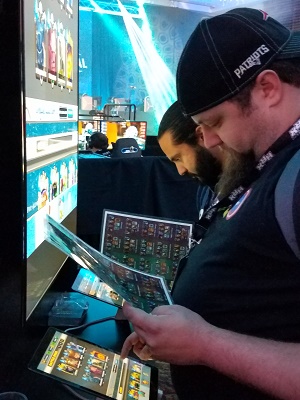 Greyson told me that when you look at any genre, you can see a foundation of similarities. For instance, you can look at all the MOBAs and see similar aspects and even foundations. However, then the games give a personal twist. He said, “There’s nothing wrong with the comparison; I think it’s a healthy comparison. But I think it’s like comparing SMITE to a lot of other MOBAs out there: There are quite a few differences in them but they fit in the same healthy genre.”

Regarding the visuals, Watson explained that the visuals are by large restricted by the market. Since the game is played primarily on mobile, visuals needed to cater to what that audience wants, which leans toward cuter characters and more pastel colors. He said the game could have been more SMITE-like, but that just wouldn’t work in this market because it is not what mobile players have shown they want. “There is a smaller box of what is familiar and wanted for the mobile market, and you do have to design for that.”

Watson stated that the team looked at a lot of games on the market, including Hearthstone, to find inspiration for Rivals. In his interview, Greyson expounded on that subject as well, saying:

“We pay attention to the entire mobile market — all the games that are out there — and we’re very familiar with the card battlers that are out there. I think a lot of the comparison comes from the camera angle we chose and then the collectible card system that we went with. We use the same isometric view portrait on a phone with 2-D sprites; that’s going to draw a lot of similarities.  We also have a system where you build a deck of eight cards and they shuffle into your hand four at a time, you play them on the board, and you also get mana over time. These are all things are very similar between your card battler and SMITE Rivals. But I think beyond that you start to see a whole lot of differences that maybe aren’t readily apparent until you dive into the game.”

As for gameplay, Watson argued that “the way [Hi-Rez] structured the battlefield is much different.” Greyson emphasized those differences, saying that when compared to the other games, “You can see quite a bit of difference in playstyle and the outcome of matches” in Rivals. SMITE Rivals is more about a tug-of-war between three lanes (the three lanes being what is most familiar to the MOBA players). For this, the top town fits better to see exactly how battles are playing out. Because the game is on mobile, it has to be easy to see what all is happening in a glance as well as be able to play one handed, and this angle met that need best.

Greyson also noted that when you play, how you build your deck is different, starting with the fact that you must build around one god and only one god. That god has not only a power (often like SMITE’s ultimates) but a passive that affects cards. But more than just gods, Rivals takes lesser know aspect of the SMITE world — the minions — and brings them into the spotlight.

Both Watson and Greyson commented on the use of the blue vs. red color scheme — the industry standard in PvP, where blue means ally and red means enemy. Watson said that the team actually worked with other colors — even letting players choose their own colors — but in playtesting found that even those players who just chose their own color scheme would forget and not know who was who on the battlefield. Greyson emphasized that Rivals is the only game that takes that color scheme even further by coloring the units out in the field. “Readability is super important in our game,” he said. “The map gets very busy: There are a lot of enemies on the field and a lot of allies on the field at the same time clashing, so you have to be able to know at a glance who your [troops] are and whose theirs are.

To the best of Greyson’s knowledge, SMITE Rivals will be the third in this type of card battler to exist; there’s one on the PC as well as the one others are comparing it to, to say nothing of the dozens more lesser-known games in the mobile market. He expects this “collectible card arena” genre to grow and develop even more variations; he looks forward to new games having their own healthy twists so that there are more options for players who really enjoy the genre. In fact, he wouldn’t be surprised to see development of other angles, like a rotating camera where you have a larger board but can’t see the whole thing at once. Greyson feels there is lots of room for more innovation and that the smallest twist can have the hugest impact. “I think a lot of people will experiment with that, and I hope we get a lot of really cool games out of it,” he said. “Ones I can play.” 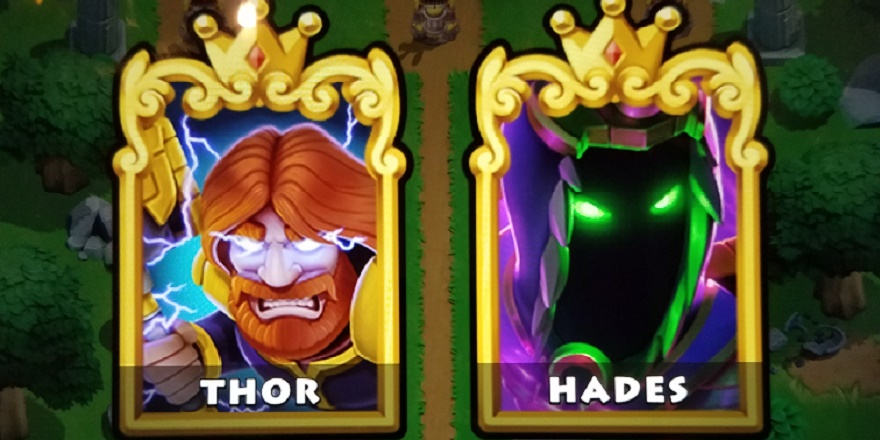 Another subject everyone wants to know about is how the game will be monetized. We know that it will be free-to-play, but what else? How will people get cards? And will only those who fork out cash be able to get the best cards?

“The answer is absolutely no,” Greyson declared. “We are not going to do that to you. You will be able to, we think, pretty easily get every card that in the game that you want.” Unfortunately, Greyson was not able to elaborate too much more on the payment model. He said that they are not talking about the model too much yet as many things are still being tested internally, but he did say this:

“But I will say personally that I am very very excited about what we are currently planning on doing, because I think it is a model that people are going to love, that is going to push not only Rivals into a really cool place but the whole idea of how monetization business models work on mobile forward in a very positive way.”

Greyson explained that he has personally played, thought about, and tested many different games and their monetization models. He believes people are much more savvy now and care more about how games are monetized as opposed to before. Players want to know whether they will be prevented from being the best of they don’t drop tons of cash as well as how others’ decisions on spending will affect their gaming experience. “We have answers to those questions,” he said. “I think we’ve taken all that and melded together what is a totally new — but still familiar — system that people are going to love. That is going to be very friendly if you are somebody who is totally free-to-play and still very friendly for somebody who has disposable income that you want to put into the game.” We’ll just have to stay tuned for the details when Hi-Rez is ready to talk.

For my part, I put in a plug for a skin that would allow me turn everyone into rabid killer bunnies instead of chickens when you play the curse card. I’d totally buy that!