Daybreak did it again. Boy, that phrase has come to mean a great many different things over the years. However, in this case it refers to the art of dropping some bombshell that makes me toss aside whatever I was working on for the week and focus on that explosion — and the resulting fallout. Sometimes it’s good. And sometimes it’s not. This time around we fell dead center into the “not” category. We are losing Landmark.

Remember when I said Daybreak needed a win this year? This is the opposite of that. This is Daybreak choking the last bit of hope and goodwill out of players like Vader faced with a lackey’s lack of faith. Disturbing, I know. Well, gee folks, Happy New Year? Forget about breaking games; I can’t help but agree that a more befitting moniker would be Sunset Games.

Although the sunset of any game is a sad occasion, this loss is one I feel very personally. After all, it is a world I enjoy immensely, flaws and all. I’ve known what the game is and I accept it for that, even embrace it for that! Landmark is unique: Where else can I truly craft gaming experiences from the ground up? It was — is — an idea with much promise. It is a creator’s playground. It is a community I appreciate and adore.

But no matter what it is, it will soon be a was. And that makes me a sad voxel panda. When the news broke (I half-suspected they knew I’d be out of town right then!), I just sat there in my hotel room following the aftermath of the news. As much as I needed to be doing other things, I couldn’t break away; I couldn’t focus on anything else. I started mourning. And I still am. Whether you are a fan of Landmark or not, losing the game is a blow. Is there any hope left for Daybreak, or for this type of gameplay?

The loss of Landmark

So come February 21st at 7:00 p.m. EST, Landmark will go dark. I totally understand that to some folks, that’s no big deal. That’s fair. The game wasn’t on every gamer’s radar. (If it had been, it might have managed a longer life.) It really was a niche experience. Some gamers are saddened despite their personal feelings toward the game or Daybreak over the years. And others still are more crushed, facing the acute feelings of losing something that is a part of their lives. True, it isn’t some catastrophic event in life, but loss is still felt as loss. I mourn with you. I mourn for all the amazing creations that were built over the years and for all the ones that won’t have the chance to be built. 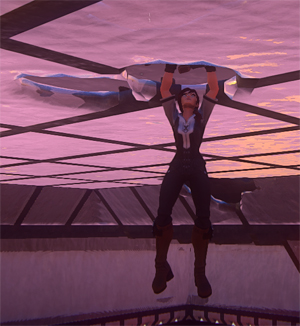 Some, however, are happy and even gloating about the shutdown. That’s a special kind of depravity. For everyone who gleefully wished the demise of this game (or any game), I’d wish the death and closing of a world you love to play and adventure in except I am just not that nasty and heartless a person. I don’t wish ill on devs’ livelihoods. I don’t wish loss on players. I just can’t revel in another person’s suffering. I really don’t care if you had a grudge against Daybreak or SOE; I don’t care the reason. The loss of a game should never a celebrated event. Losing it may not be a cataclysmic event, but it’s a blow to our genre, and even moreso a blow to the lives of the devs who worked on it and the players who invested themselves in it. Regardless of the reasoning why it goes away — be it from mismanagement, evil gremlins, mismarketing, super bad luck, undelivered promises, bad timing, company buyout and restructuring, or what have you — there are always more casualties than just the ability to log in. Livelihoods are affected. Ideas and innovation are avoided, even shunned. There’s an emotional cost on many sides. Even when a closure is a necessary thing, that doesn’t mean it’s a good thing. Good can come of it, especially when we learn something, but that doesn’t make it good in and of itself.

Nothing lasts forever. Even the staunchest of fans knew Landmark‘s days were numbered. We all just hoped the number of days would be higher — much higher. There’s a promise to this game and gameplay that isn’t matched elsewhere. We want to keep some of that, somehow, somewhere. Can we?

Power to the players?

In a game that was all about giving power to the players (to create the world, create the dungeons, and create the story adventures), it wasn’t hard to wonder immediately why the company wouldn’t give one final power to the players — the power to keep the dream alive. Why not give the source code out and let players run a server or emu? I admit the question formed in my mind during that first sentence of the announcement. However, Daybreak was quick to squelch any hope of that prospect. The studio left no room for speculation by stating this quite plainly in the sunset FAQ:

The playerbase may not have been huge, but there are definitely those who would appreciate keeping the world alive in some way. Personally, I’d love a personal server; I have long said that having privately hosted Landmark Islands would be awesome. But the company didn’t take that route during the game’s life, and it’s not going to take it at the end either.

Not sharing the source code could happen for a few reasons. One is that a good chunk of the code doesn’t actually belong to Daybreak. We know that the Voxel Farms stuff was not created by Daybreak, even though the studio did in-house adaptations and such, so there’s sure to be licensing issues involved there.

Another possibility (no matter how remote) is that the company may be adamant about not sharing the technology because there is a plan for it to be used again. I have to admit, I hope this reasoning has some semblance of truth to it. Perhaps the idea will take root in another game Daybreak develops. Or maybe Columbus Nova will sell the code off to someone, and we’ll get to see another company take a crack at delivering a product using it. Personally, I really do want to see the game in some form again. There is nothing else out there that allows you the ability to terraform to this degree, to create phenomenal works of art and architecture.

Yes, after all this I still hold out a glimmer of hope. The future is built on hope. I hope that something is learned from this whole experience that benefits the industry, and I hope that this type of gameplay is not lost. Perhaps in time the community will find another home to unleash their creativity upon. And when it does, I will be there!

RIP Landmark. May your final days be filled with friends making memories.

Neverwinter shows off its upcoming rewards from the new Sharandar campaign