Pantheon: Rise of the Fallen’s latest newsletter includes a state-of-the-game memo from Creative Director Chris “Joppa” Perkins, who recaps the game’s progress since the last one (apparently in May of last year). In that time, he says, the team’s brought on multiple new team members, including an associate designer, and demoed multiple zones on-stream. Visionary Realms continues work on a new class, the “extreme climate and acclimation systems,” two new zones, “marked improvement in NPC AI,” and the disposition system.

The newsletter also revisits the topic of the class matrix, which was actually the subject of some controversy in our comments when it released some weeks ago. Apparently, it raised questions among the game’s backers as well. For example, the developers defend the game’s plan to restrict Gnomes to casters and rogues, to block Ogres from sneaking in the shadows, and to bar Dark Myr from holy classes, noting that some restrictions are a result of lore, others physique. On the other hand, the devs justify their selection of the bard for the Dark Myr, suggesting that they’ll be mournful dirges instead of peppy troubadours. 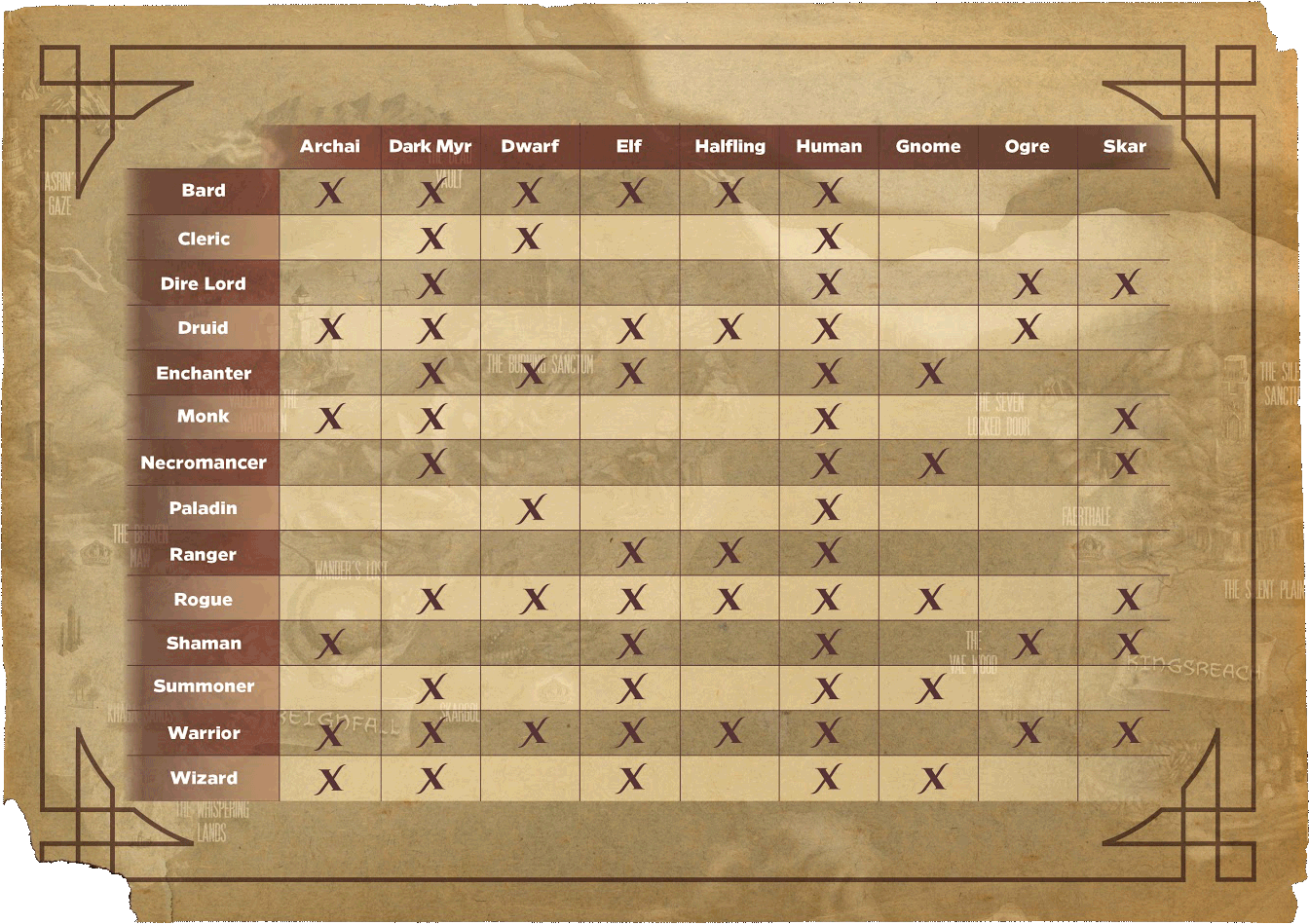 I’ll buy this game just because it has support classes.

Very happy to see them staying with keeping lore and aesthetic important and not caving to homogeneity. I hope this game does make it to launch as it will give a modernized engine/graphics of “old school rules” option to this sea of “no real choices because of #don’tpenalizemebro” games.

Class matrix pretty std for D & D and most old school and even some new school RPG’s a giant Ogre shouldn’t be able to sneak around like a small gnome thats that WoW everybody gets to do everything mentality.. this game is pretty much a love letter to people who miss EQ1, may not be for everyone but there plenty of older folks who miss this style of game.

I watched some recent gameplay videos and the combat looked extremely boring. They had three casters just sitting there on the ground trying to recover drops of mana while the melee just woodenly swung at the mobs. Were the melee using any special abilities you ask?! I have no idea, all they did was swing like they were lumberjacks attacking a tree.

It looks like a very, very old school of combat that might be fun while waxing nostalgic but in practicality you’ll quickly realize other games have done away with this model and moved on.

Modern MMO combat of trying to smash 20 buttons at the same time and watching all kinds of large numbers pop up while the screen is filled with light effects is not any better though. The middle ground is ideal, imo. I hope they will move towards that a little more.

Still on the fence with this one, but having a pure PvE game to play alongside a pure PvP game like CU will be nice. I’m glad at least indie developers are going back to targeting certain aspects of the genre, catering to certain customers. We haven’t had this for ages, instead we’ve gotten game after game trying to be everything to everyone.

I’m glad about the racial restrictions, sure I won’t be able to play my desired combo, but I’d rather they stick to their guns in regards to lore instead of having everyone be everything. I think it’s bad enough that humans can be everything, but I understand why it’s done from a marketing perspective.

I am actually looking forward to this, after having given up on MMOs (mostly – still dabble a little in a few titles) for a year or more now.

Solo player here.Time for me to move along.

From what they have said, yes you can solo although content won’t be designed specifically for soloing. It will probably end up like classic EQ – depending on your class and skill, you will probably be able to solo some.

Really? Because in the gameplay videos for the class play through as they mentioned repeatedly that it’s a group game, you will require a group for much of the content etc.

I don’t know if you ever played Final Fantasy XI, but that game was extremely group focused. That didn’t mean that you couldn’t solo anything though. It just meant what Reht said; things were not designed specifically to be soloed but people managed to do it anyway.

This game won’t be catering to players that want the norm to be soloing though, which I think is fine. There are enough games out there that do this already. Pantheon: RotF will be nisched which is great because everyone likes different things, but this particular nisch has not gotten anything new to play for a long time. I am sure it won’t be hugely popular like WoW or FFXIV, but it will fill a spot in the genre which has been forgotten for quite a few years now.

I remember it being quite challenging soling in EQ in 1999 at high level. It was doable, but risky and stressful. Guess not too bad if you had really good gear from what I heard, but I didn’t.

Loving that this team can take a few licks and keep on with their vision. I also love that they are sticking to their guns, in the face of all the casuals and solo players crying that the game isn’t for them.

When the kickstarter started for this I thought it was a sure fire failure, the team has actually proved me wrong, and I’m excited to see where they take their vision in the future.

Yeah, the problem is both EQ2 and Wildstar took a similar approach and both paid for it. Those solo players and casuals “crying” are the people who actually pay for the game. EQ2 also took a “you must group for everything” approach on release and, eventually, back tracked from that.

WildStar did similar things for their “hardcore” raid approach with 40 players, gating etc. Yes, the casuals were “Crying” then too, and the devs stuck to their guns. See where that got them.

That’s a stretch. Wildstar was aimed 100% at the hardcore elite, and it failed to provide any challenge in its first raid to keep that market. So not only did it alienate the hardcore niche, but everyone else as well.

EQ2 actually had a large following at release, a lot of people enjoyed the grouping. Yes it didn’t cater to the solo crowd, but it very much catered to the non-hardcore groups. Unfortunately it had the poor karma to release in the same window as WoW. As the suits in charge of SOE saw the massive numbers WoW was drawing, they did everything in their power to emulate WoW features into eq2. Which pisssed off the grouping social crowd, but managed to tap some of the soloists. Never to the success that was WoW. But saying that eq2 was a failure due to not caving to soloists and casuals would be a misrepresentation of the reality of how things went down.

The other part of that equation, the studio behind pantheon doesn’t need to pull hundreds of thousands of subs to remain profitable in the eyes of suits and board members. They can focus on a niche market, pull 100k subs and be happy.

No the problem is modern teams not realizing that MMORPGS are still a niche genre. I have no doubt these guys realize it is a niche title that isn’t going to have millions of players. Remember before WoW the high end of the market was around 500k tops.

Sorry but I agree with John, all mmos don’t have to be all things to all people. Carbine’s problem was not just the fact that they made the game hardcore. The problem was that the design didn’t appeal to the hardcore crowd who didn’t want to play a cartoon. If the game had a more serious approach with its design and was more realistic looking and serious it would have attracted its crowd. Even if they wanted to keep a more cartoony approach they should have went more Full Metal Alchemist Brotherhood or Heavy Metal as opposed to Bugs Bunny and Earthworm Jim.