The big screenshot challenge last week was to capture action, not just still shots, in MMORPGs. This is tricker than it sounds, because you have to be quick with the screenshot key and manipulate the camera just right to get the perfect picture. It is easier to do this with other characters, obviously, including those in cutscenes.

Borghive gets headlining honors with his “final showdown” between the Witch King and Éowyn from Lord of the Rings Online. She looks a little outmatched, what with being smaller and having an actual head, but I think she’s going to come out just fine. After all, she is no man. 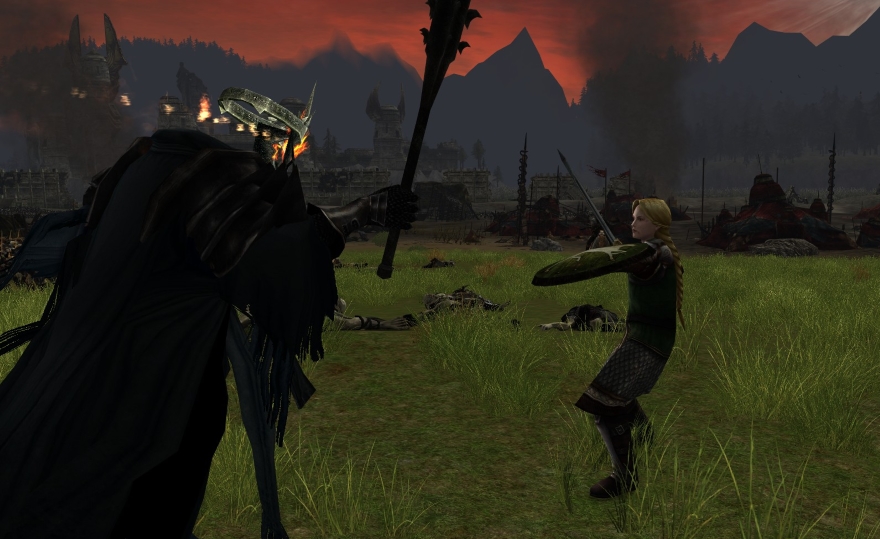 Has your character in an MMO ever had a really bad day? Brandon’s Twi’lek in SWTOR certainly is, as she’s getting to know the local flora in an uncomfortable way. This is why I flamethrower first and ask questions later. My scorched earth policy might be controversial, but at least a tree never hugged me. 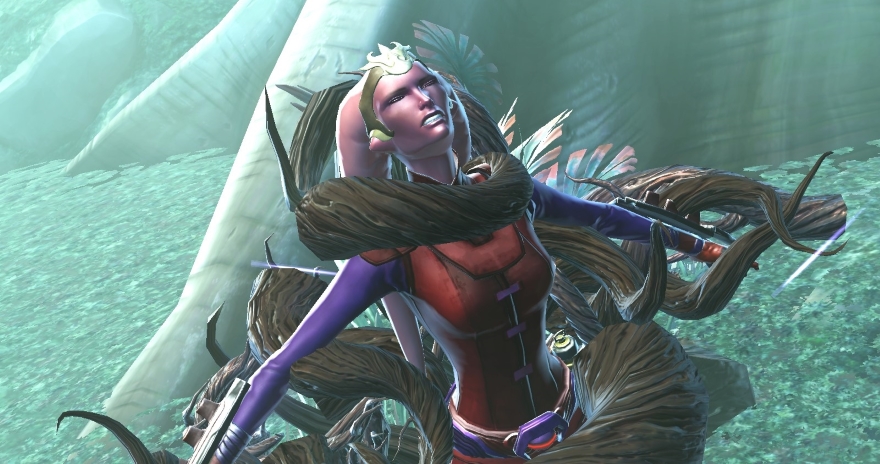 Cap’n Rob sent in a whole bunch of Star Trek Online photos, and honestly it was tough to choose among them. I went with his shot of the U.S.S. Juno, a 23rd century starship blasting across the cosmos just because I like the sense of speed and power that I get from this. 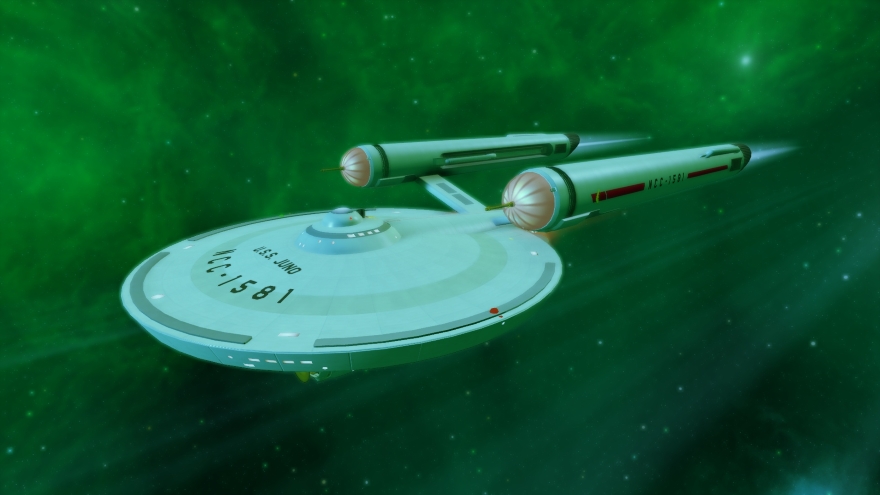 “You actually convinced me to give RIFT a shot, so I figure it’s only fair to shoot you over a one shot of a sunset on my noob toon,” Suikoden submitted. “You guys are doing an awesome job over there at MassivelyOP. From a fan of the genre, thank you.” 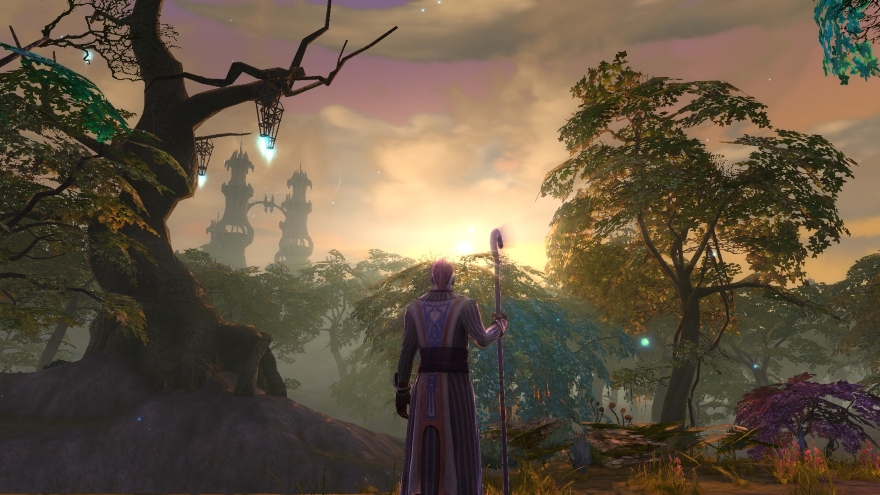 Years later, and Guild Wars 2 still impresses me so much with its visual design. I remember a period of time when we didn’t get any pictures except Guild Wars 2 pics for this column (waves of popularity go like that).

“Just a screenie from GW2’s newest map this week,” Xephyr wrote. “Divinity’s Reach sure is looking pretty in the background.” 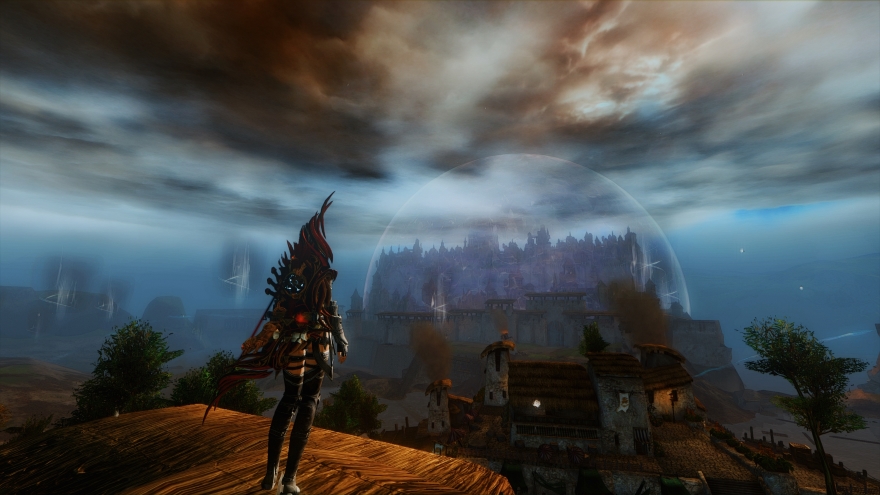 That’s about it for this week, but don’t despair: The party really begins in the comment section, as always! The screenshot challenge this week is to capture something that embodies the spirit of being “childlike.” Maybe this is an MMO geared toward kids, or perhaps it’s simply something you spy in a game that recalls youth and innocence.

For me, things related to children and childish things in video games often tend to be rather creepy. The nursery in the Estate of Unrest creeps me the heck out any time I go in there for instance. But even it doesn’t have much on The Secret World when it comes to creepy places for kids. From abandoned playgrounds, to derelict amusement parks, they really convey a sense of innocence lost (or destroyed). And of course, what could be a more welcoming sight in front of the local kindergarten than dead bodies draped over the mailboxes and a severed head at the base of one?

No spoilers, but I’ve recently started the Tokyo section of The Secret World, and they’ve introduced the gaka (sp?) from Japanese folklore (evidently) — murderous spirits who look like children with glowing eyes. As long as you look directly at them, you’re safe, but the minute you turn away …

It’s creepy, but compelling; the same as most of what TSW does.

Thanks for the great screenshots!

I’ve done a bit in Tokyo and know what you’re talking about. Definitely creepy. I know there’s a playground there too with a seriously creepy kid that I thought about going to get a screenshot of for this, but didn’t.

Can I add another one? Here’s the guy I made for Grand Theft Auto V Online.

You can’t really make pretty people for GTAO, as befits the crime noir genre, so instead I made a guy who thinks himself incredibly stylish instead.

I figure he would fit right in a world which features deekay’s “Evil Molly Ringwald”. :-)

Anyway, I don’t really like or play GTAO (PVP bores me), and I poke at the single-player game only rarely (I got the game super cheap during a Steam sale).

Speaking only for myseIf, I much preferred the genuine crime-noir social satire story which informed Grand Theft Auto IV. Underneath all the mayhem of GTA4, there was a scathing critique of the failure of the American Dream.

I’ll probably catch flak for saying this, but GTA 5 seems (to me) like a crime story put together by people who’ve simply watched too many crime movies and TV shows — and aimed squarely at disaffected surburban white kids who think dropping n-bombs and saying motherf#cker every few sentences makes you a badass.

Nice distinction. Yeah, GTA 4 was a better story. GTA 5 is food for the hungry game wolves.

Excellent metaphor — and you managed to say in two sentences what I took paragraphs to explain. :-)

Not many new shots this week. I did take a nice one of my Prized Esteldín Steed, which is just a beautiful horse. A shame it doesn’t come in warhorse appearance.

Then… the Black Gate!

Finishing my exploration of the titular Black Desert was interesting for sure. Alot of water to be seen but the desert itself doesn’t give much in terms of captivating vistas. Could have taken a few caps of Pila Ku Prison and the Muquinn Outlaw Camp, though.

Curious if I remember the rather humble beginnings. That’s the Cron Castle Site to the distant North. Velia is in the fog below it.

So much for actions shots…

I have to agree. Even with long sequences of pics, most of my attempts to capture action with still frames ends up either blurry, or really awkward looking.

We’d love to see any action shots you’ve got stashed away on your hard drive!

I have no particularly child-like pics to share — but when I was a kid, re-runs of the original Star Trek captivated me, and began a life long love of the Trek universe — so I’m going to pretend that counts. :-)

Here’s a pic of my time-lost 23rd century starship command crew in Star Trek Online during a planetside mission,

Notes * = the Korby-type androids (from the TOS episode “What Are Little Girls Made Of?”) can be acquired if you belong to a Fleet which has an upgraded K-13 station Fleet holding.

** = When you max out your captain’s Diplomacy rating with the Duty Officer mini-game, you are allowed to choose one bind-on-pickup bridge officer from “the other faction” (Klingon Defense Force, in this case) to join your crew. I decided to go with the world’s most durable redshirt! Gorns for the TOS win!

I’m going to go off-topic and share my “adventure” of completing The Inn League’s initiation rite. The scrambled order of images seems appropriate in this case.

Speaking of GW2, is anyone else bothered by the post-reconstruction loading picture for Lion’s Arch? It’s just so vague; you can’t really make out anything from it. It doesn’t look like the bright town at all.

I am ticked by anything related to that new cookie cutter LA. The original GW2 one was unique. If I knew that was what they were going to do to it, I would have never done any of thew quests to help out.

Ship of Heroes calls one and all to its July beta...