Online ARPG Grim Dawn has a new NPC on the way this year that’ll change how players interact with gear, specifically cosmetic gear: The Illusionist NPC.

“For a modest fee, the Illusionist will transform your gear to look like any other item of the same category,” says Crate. “Using proprietary Illusionist mind-meld technology, any item you discover will automatically have its appearance stored. In fact, the first time you launch the expansion, every item you have in your inventory and stash will be automatically added to start your collection. That’s a lot of different looks! To facilitate your soon to be growing collection, we have created a brand new UI that stores and previews all of your appearances, accessible at any Illusionist.”

The rules are pretty similar to rules in other MMOs and ARPGs, including the fact that the Illusionst doesn’t work for free, and you can’t turn a greatsword into a dirk.

The game formally emerged from early access a year ago, having been deemed “feature complete” at the end of 2015, having been successfully Kickstarted to the tune of a half a million bucks back in 2012. Since then, it’s pumped out seven content updates, including the Crucible DLC, and has plans for its first big expansion — including the Illusionist — by this coming summer. 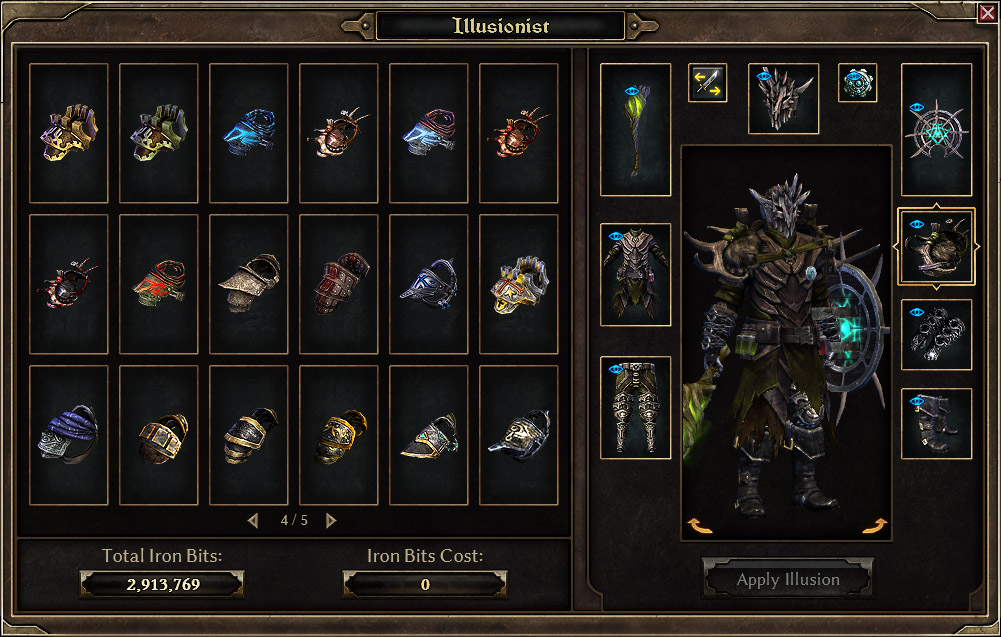 I continue to be amazed at the quality of updates from a game I absolutely didn’t expect this out of. Grim Dawn is a game I play just to enjoy some Diablo style hack and slash with a bit more story than Path of Exile, yet time and again Grim Dawn shows that it is something different and in some ways better than PoE.

This is another game that is quietly doing its own thing and just getting better. Hope I can check this out soon :-)

This game any good?

If you like diablo style games, then yeah, it’s pretty good.

It is very good. Not the best of settings IMO but everything else about the game is excellent.

I like to think of it as Diablo/PoE with a western twang.

This game is an excellent ARPG. (It is built on the Titan Quest engine and has a lot of the same mechanics, such as finding fragments that stack and can enchant various types of gear.) The only real comparison to Diablo (2) would be the gritty world. Hence the name, Grim Dawn. It has a dual class system and quite a lot of theorycrafting possibilities with class synergies.

Depending on your class, combat can be fast and challenging. Quest-based progression through the world, with progressively more difficult mobs and better drops, including legendaries.

I’d rate the currently well-known ARPGs in this order, although my personal take is that D3 is not an ARPG, but an arcade speed runner, nonetheless:

It is definitely worth a look if you enjoyed Titan Quest.

If the devs weren’t so trigger happy with nerfs, it would be a really, really good game.
As it stands, you put dozens (or hundreds) of hours into farming the really good gear for your build of choice and once you have it working well, Zantai comes and nerfs it (both gear & build).

It really is. Not the best looking game of it’s type, but otherwise a lot of fun and really well done, with a really meaty story campaign compared to other ARPGs.

Probably not copied from WoW, given how many games had cosmetic systems long, long before WoW gave in and put in tmogging. :D

I will never forget my druid in her green hot pants that I could not get rid of fast enough. Hey, let’s hear it for WoW finally deciding costuming was here to stay.

True story, WoW was the first game to have a cosmetic system

Not everything, but believe it or not WoW introduced alot of original concepts that were copied by other MMOs. Its why we have “WoW clone” term.
And while WoW didnt invent cosmetic system (which I didnt claim to begin with), it made its own design for wardrobe panel. Which GD obviously copied. If you know where wardrobe looked like that BEFORE WoW, enlighten me.

Warms my heart to see LotRO’s system mentioned here. To date I still think they did by far the best job of all the varied MMOs out with a costume system (one of many top notch LotRO systems really).

>WoW introduced alot of original concepts that were copied

and cosmetics system was not of them

WoW not only didn’t invent the wardrobe/cosmetic system but earlier games did it better. LotRO pulled off a better system than cosmetics years earlier and continues to be one of the leaders in that field. GD copied neither the style nor the concept from WoW, just no.

You can argue all you want which wardrobe is better, but Grim Dawn’s wardrobe looks exactly like WoW’s, not like LoTRO’s.

This is the picture from current WoW wardrobe. Compare it to picture in article top:

The Daily Grind: Which lowbie MMO alt have you enjoyed playing the most?

The Daily Grind: Which lowbie MMO alt have you enjoyed playing...