END_OF_DOCUMENT_TOKEN_TO_BE_REPLACED
At last week’s Elder Scrolls Online press event, I sat down in the ESO Live studio to talk to the PvP designer in person: Lead Designer Brian Wheeler, whose high enthusiasm for PvP in the upcoming expansion Morrowind is nearly absurd. Sheogorath-absurd.

Now, I would not consider myself an elite PvPer, but I am a fan of good PvP design, one that incorporates a good class meta, interesting maps, and meaningful leaderboards so that PvPers can prove to their friends how good they actually were. I was sitting on the edge of my seat as Wheeler and I discussed the ins and outs of this new game-mode for Elder Scrolls Online. Let’s dig in! 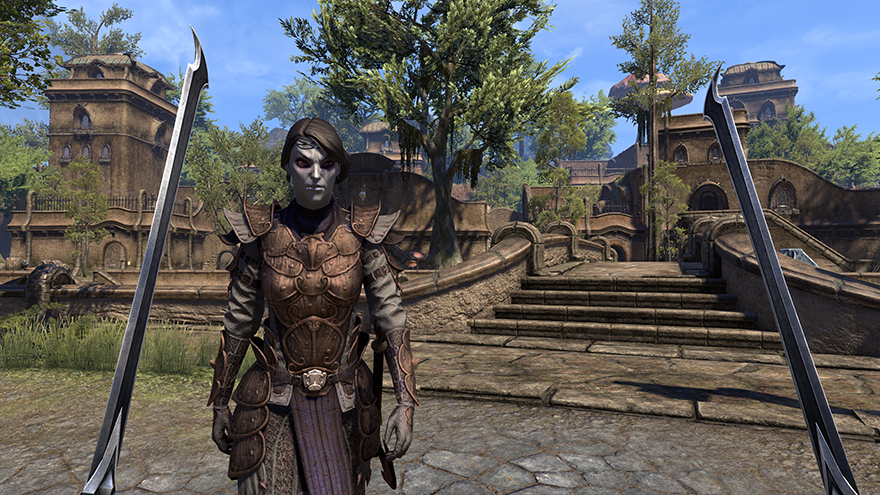 What are ESO battlegrounds?

If you have PvPed in just about any modern MMO, then you probably already know what battlegrounds are. They are small instances where teams of players are pitted against each other to achieve a specific objective. Although Wheeler mentioned that the devs are working on several other game modes, Morrowind will launch with team deathmatch, capture the flag, and point defense. Wheeler said that these are all just games “you played in the schoolyard,” so they should seem very familiar to you.

Wheeler described the maps of battlegrounds as being “smaller than a district” in the Imperial City, and that the idea is that it will take less than a couple of seconds for players to run into each other if they all immediately head to the middle. To start, battlegrounds will have three maps, each supporting all three game types. The first map he mentioned is set in an Ashland quarry that is very open with a handful of line-of-sight breakers. The second one is based on Dwemer ruins with tight corridors and a second level. The third map is a bit of a mix of the two; it’s more open than the Dwemer map, but there is a platform in the middle that is only accessible from teleportation pads.

Critical to note here is that these battlegrounds aren’t your typical two teams of 4-16 players. Just as in Cyrodiil and the Imperial City, there are three teams, but the team size is only four players, and thanks to systems like One Tamriel, there is no faction split. For example, a Daggerfall Covenant character can be teamed with an Aldemeri Dominion character and two Ebonheart Pact characters. The development team decided to go light on the narrative this time around and focus more on gameplay and mechanics, so don’t look for a heavy story-bound reason to be battling each other in groups like this.

It’s a political match every match.
Wheeler describes battlegrounds as fitting a niche that Cyrodiil and the Imperial City don’t fit yet. These are meant to be 15-minutes-or-less battles where you are in and out quickly and there is less risk. Cyrodiil is a warzone, he reminded me, and the Imperial City is high-risk. Battlegrounds can be queued up from anywhere in the world once a player hits level 10, and they take only a few minutes to be ready. “[Battlegrounds] will help with those who are scared to go into Cyrodiil as well as the casual player who only has 15 minutes on lunch,” he believes.

Leaderboards and other must-haves

This is the first time that Elder Scrolls Online has stepped into the instanced PvP arena (pun intended). Are these battlegrounds going to have the things that PvPers and killer-types are looking for? According to Wheeler, they will. Leaderboards will be set up so that you can compare your ranking with other players based on the game type. Even though there will be different brackets, players will compete with all brackets on the leaderboards. The current plan is to have a 10-to-49 bracket, a level 50 with no CP bracket, and a CP bracket. However, everyone who plays capture the flag will be placed on the leaderboard with everyone else playing capture the flag, regardless of level.

Because of the way the leaderboards are divided, I asked whether players will be able to queue for specific games. Wheeler said that is the ultimate plan, but currently, because there are so few game types, Morrowind will not launch with that functionality. He did explain that eventually game types will be broken up into buckets and that players will be able to choose which bucket to play in. For instance, games like capture the flag and murder ball will have the same kinds of medals awarded and similar rankings on the leaderboards so players will eventually be able to queue for those types of games together. (Note: Murder ball is not going to launch with Morrowind.)

I also brought up the concerns of mods and add-ons. He said that the team will keep a close eye on mods and add-ons as it has for the current PvP zones, but so far the devs do not see any that would give players an unfair advantage in battlegrounds over other players.

Personally, I don’t know how much battlegrounding I will do, but I am glad to see this level of thought dropped on repeatable content, and it gives me hope for future content.

Disclosure: In accordance with Massively OP’s ethics policy, we must disclose that ZeniMax paid for our writer’s flight to and hotel at this press event. They also fed him a Panera Bread ham and cheese sandwich. Yum. Neither ZeniMax nor Bethesda has requested nor been granted any control or influence over our coverage of the event, and the writer is paid exclusively by Massively OP for his work.

Get caught up on all of our pieces from the Morrowind press event!