It’s amazing how some things stick in your mind while others don’t. I honestly had forgotten about the whole questline in WildStar that involves showing off just how awful the Dominion can be until I was knee-deep in it, but as soon as I was in there, I remembered being impressed with it. There’s a lot to like: subtle worldbuilding and careful production that really sends a message and forces you to think about what you’re doing and why. I like that and appreciate it immensely.

That makes it a good companion piece to dungeon queues just not happening. And it also lines up nicely with the fact that this week’s CMA provides us with a heretofore unprecedented opportunity, one that I am very curious to see about the response to. It wasn’t really an option in the last installment, and it wasn’t necessary in the prior one anyhow… but now, it’s a choice. But let’s not get ahead of ourselves. 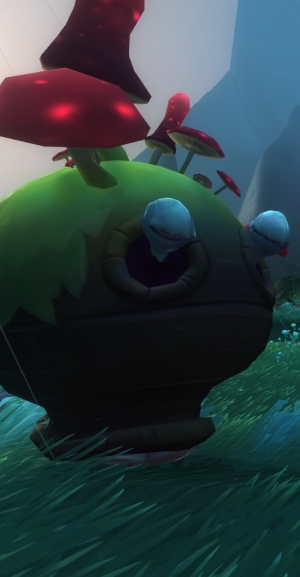 One of the things that WildStar made a development point early on was the idea that its quests were meant to be delivered quickly. A lot of words were spent on explaining why Twitter text was the optimal length for quest text. The idea was that by delivering text in that quick burst, you immediately got a sense of what was going on with a minimum of words and got on with the actual gameplay.

Needless to say, a lot of people were quick to call foul, noting that the lack of words would mean that you were deprived of emotional impact and lore in equal measure. It was too brief to work. But the Pell storyline early on in the Dominion starter zones shows how much emotional weight you can pack in there, and how effectively this can be handled just by trimming out the fact.

It’s a sad story, really. The Dominion wants some Eldan artifacts, so a trade is arranged with the Pell. Everyone walks away happy… until a slow-acting poison within the traded supplies takes effect to kill the majority of the Pell. That wasn’t part of the deal, it wasn’t even necessary, it was just the result of one member of the Vigilant Church deciding that it was easier or more satisfying to kill the Pell after you had what you wanted.

Sure, you bring him to justice, but immediately afterward you have to deal with fighting back against the now-enraged remnants of the Pell who would like little more than the Dominion’s collective heads on sticks. And yes, you never meant to hurt them and you’re defending innocent people… but the blood is still on your hands. You correct the situation, but you can’t cure the root causes. It’s not an option.

The whole thing is subtle and moving in odd ways, and it’s also accompanied by some pretty tight mechanical design. Sure, you’ve got your go-kill-X-things quests out there, but you also have an escort-and-holdout mission, a sequence of ball kicks, and a few other more interesting quests along the way. By making everything so quick, you can deliver a lot packed into a very small area.

Of course, that brings up the question of why the game does so much to make sure that small areas contain so much gameplay and then turned its dungeons into nightmarish examples of slog-like gameplay. I have to draw on memory here more than recent experience here, though, because for whatever reason my dungeon queues were… well, let’s just leave it at “too substantial.” I am a reflection of what I have to work with, and in this case, what I had to work with was never getting in to the Protogames Academy.

On the one hand, yeah, that makes sense, no one wants to run the introductory dungeon forever. By the same token, it does mean that there’s not much for me to say about the actual content beyond its intended role as an introduction to the group dynamics of the game. 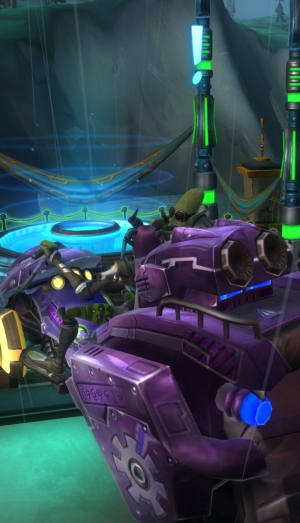 Do I think that this is because it’s a bad instance? I don’t actually know. But I do know that the game seems to have ensured that it’s far, far faster to just go about and quest solo rather than trying to get into a dungeon. Even if the dungeon provides comparable experience when it’s cleared, my memory of WildStar dungeons was that it was far slower due to an over-reliance on mechanics without clear explanation and with steep consequences for failure.

All of that is not the sort of thing that inspires people to take part in dungeons while leveling. When you’re going in at the level cap and the gear contained therein is vital, you’re more likely to put up with it than when you just want consistent and straightforward clears. So I can totally understand why people may not want to get into the “teaching” instance any longer, even if the whole improved scaling thing from Wednesday’s patch was meant to make it more appealing.

This is, unfortunately, a design philosophy that seems to have shot through an awful lot of WildStar. The idea behind it seems to be that it’s better to have players doing at level cap what they’ve been doing with the rest of the game up to that point, which is a philosophy I agree with. But the problem is, well, the level cap is not the same as what you’re doing along the way. People are more willing to put effort into things that have slower build and reward at the level cap, simply because they’re no longer chasing that carrot of experience.

Making all of the game’s interim levels feel like the most slog-like part of endgame play was doubtlessly not the intention here. To a degree, it was the result. Not entirely and not comprehensively, but it’s worth noting.

Of course, it does mean that the level cap is a very different experience. And herein we come to a unique opportunity, because the Power of the Primal Matrix update brought a level boost with it. This is unique. Usually, when I’m running these events, either the level boost won’t have much of an impact (as in The Elder Scrolls Online) or it’s prohibitively expensive (as in Lord of the Rings Online). Here, it’s just sitting there, wholly accessible and easy. Which means that I could just jump up to the level cap and start exploring there.

By the same token, perhaps you’d rather see me round out the adventure in the lower levels. I don’t know! Why don’t I turn that question over to you, the reading public? That’s sort of the point of this feature, after all.

CMA: Should I create a new max-level character?

The poll ends on Friday at noon, which should be more than enough time to create a character even with my trip to PAX East this weekend. (Longtime readers will know that I am not exactly a huge fan of that journey, but I like what’s at the end.) So let me know, and I’ll be back here next week either way for the final leg of our journey on Nexus. Until then, you can leave your comments down in the, well, comment section. You can also send them along to eliot@massivelyop.com, both are acceptable.

Welcome to Choose My Adventure, the column in which you join Eliot each week as he journeys through mystical lands on fantastic adventures — and you get to decide his fate. More accurately, you get to decide what he is trying to do. He cannot play queues where there are no other players. He is but one man.
Advertisement