END_OF_DOCUMENT_TOKEN_TO_BE_REPLACED
Everyone loves expansions, right? Neverwinter’s latest expansion, Cloaked Ascendancy, launched the last week of February, giving players the opportunity to delve in and enjoy the new areas and stories for the last few weeks. That is, PC players have that opportunity; fans who prefer to partake via consoles have to wait extra time for each update and expansion to pass certification by the respective console makers before they can release. And waiting is never very fun.

Thankfully, this wait is just about over: Cloaked Ascendancy will land on the Xbox One and the PlayStation 4 on Tuesday, April 11th. In less than a month, all Neverwinter players (of the appropriate level) will have the chance to experience all the new stuff that the expansion offers, from the the new zone to the new story line to the new skirmish.

If that still seems a bit too far away, we’ve got something to help tide you over: I sat down with Thomas Foss, Lead Designer, to talk more about the expansion. We discussed the inspiration behind it to his favorite parts of it. He might have even shared an Easter egg or two! 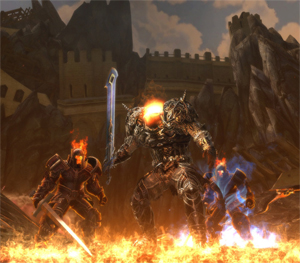 The purpose of Cloaked Ascendancy

Players may not think of an expansion as anything more than just additional content. Although it doesn’t have to be the case, many times content is developed for specific reasons. So what was the reasoning behind this expansion coming out now? I asked what its purpose was in the grand scheme of things. What struck me about the answer is that this expansion will help players feel like they have made a difference in the world around them as well as enhance the D&D experience.

Foss described how over the coarse of the last adventures, players have been been up in the frozen north fighting giants and dealing with the Sea of Moving Ice. Now he feels it was time to bring players back home, time to go back to Neverwinter and jump back into their lives there and enjoy their spoils. And that return isn’t unheralded; players won’t just stroll into a town that is exactly how they left it. Foss noted that players “come home as a hero. You’re a ‘local boy made good’ at this point.” He continued, “I want players to really feel that they are not just the same adventurer [that left].” Players hit a legendary status: When they return, the NPC that used to give them jobs as a superior now becomes a drinking buddy, and Lord Neverember asks for help and advice instead if giving orders.

Foss also noted that he’s been striving toward making the game feel more D&D. (He’s also keen on adding more humor back into the game, so be on the look out for that!) Folks might really enjoy the nod to D&D tropes, such as finding adventure simply by visiting a tavern. It just happens that the tavern is at home. It may be home but there’s still an element of danger. An adventurer never really gets to rest, right? There will of course be more adventures to be had in the world, but before players can head out for those, they need to make home safe again from the threat. And because they are the local hero, who better for the job?

The story behind the story

When dealing with an IP that is very rich in lore like Dungeons & Dragons, I am always curious as to how much of a the story is already established and how much devs embellish or create themselves. Where is the inspiration from? Cloaked Ascendancy, just like every other addition to the game, has a mixture of canon and new.

Foss explained that the story is based on art that came directly from a Wizards of the Coast 3rd Edition campaign book. “Throughout Neverwinter,” he said, “we’ve had these asset pieces of these awesome paintings of wizards that we hang on the tower walls and in different places. And I have always wanted to know the story behind those portraits.” When proposing the idea, Foss displayed the pictures and asked the team, “Who are these people? Let’s tell their story.” (As an aside, Foss also admitted that he was really looking forward to focusing on magic again after fighting giant monsters for so long.)

Players familiar with D&D lore will find that a good portion of the expansion is canon. For instance, the River District was always a part of the city of Neverwinter, a place where wizards, rich nobles, and merchants lived. After surviving the Spellplague (also lore), it was closed down when residents fled the destruction of the cataclysm. In terms of gameplay, what better place to find left behind riches and loot? Lore also has the Wizard’s Cloak Tower being ripped up from that district, disappearing for weeks, before reappearing in another district. Foss notes that all of that is canon. From that, Cryptic took on the task of defining who those wizards were and what they were doing now. 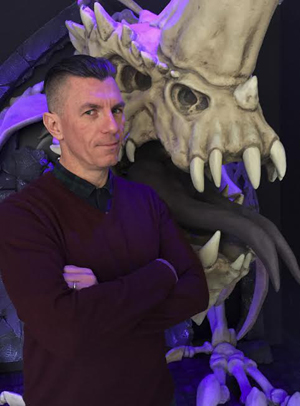 Besides being a turning point for players (in the return to Neverwinter), Foss called Cloaked Ascendancy a turning point in how Cryptic is building the game, especially endgame. The emphasis, he said, is on replayability and player agency. Foss stated that he wants to get away from a very linear tunnel experience that forces players down a specific path. Instead, he wants to allow them to explore how they want to play the game. “It’s more about the players being able to choose what kind of adventures they have or how they want the adventure to unfold.” He then elaborated on how Cryptic fostered this in the expansion.

Foss explained that in order for players to secure the River District (the ultimate goal), they will need to do story quests find out who the wizards are and how to defeat them. However, players will choose who they want to focus on — which wizard in what order. Before they can get to the story research part, players must physically secure the district by clearing the areas of wizard minions and other dangers that lurk so that guards can come in and start protecting the area. Before the guards can move in and do their job however, players will need to build guard posts for them. Once in place, the guards will keep things settled so players can then dive into the tombs and crypts and such for loot. Foss noted that one of his favorite parts of the expansion is working with others to clear the areas and get the posts built.

Replayability is also an important factor to Foss. He described how this was achieved in the new expansion using the new skirmish. There, players will actually meet one of the wizards and face his illusions, which range from changing scenery to changing elements and hazards (like traps) to changing creatures. So each time you play will be different. Some players may even be randomly turned into chickens. The idea is that devs were aiming for fun instead of a grind. Foss believes that there are over 60 variations that players can experience.

As for Easter egg surprises in the game, Foss revealed that players will actually have the chance to fight him as the Mimic King in game if they can find him. His avatar is found somewhere in the epic version of the Spellplague Caverns dungeon, and besting him and his minions will offer a really cool reward. Players can also go through the Spellplague Caverns as a regular three-man dungeon.

As much as there is a rivalry between the PC and console users in the gaming world and a debate about which platform is better, Neverwinter players don’t have to choose between them based on content. Aside from coming out six to eight weeks later due to the certification process (Foss noted that the team has lowered that from 10 weeks), the console content is the very same that PC players have. Using a jumping puzzle as an example, Foss described how when content is being developed the team will sit down to make sure something works on all platforms. Can the puzzle be done with both a controller and keyboard and mouse? If not, the team tweaks or redesigns it. Foss emphasized that console players are very important to the studio, so making sure they have an equal experience is a focus.

How is Neverwinter doing in the console market? Although he didn’t share any specific numbers, Foss did state that the number of console players is growing steadily and constantly at a quick rate. “It’s really awesome to see all the new players coming in,” he said. Foss also noted that as Crytpic opened up a new console (the PS4 recently), the studio also saw an increase in PC players, both returning and new ones. He then shared that he just got a PS4 and has started playing the game at home on it, so now with the Xbox one at the office and his PC, he plays on all three platforms. He knows of other players who also play on both platforms even though the games are completely separated; sometimes people use the PC for their big established guilds then started over to play casually with friends on the console.

Foss noted that the next updates after the expansion’s launch will likely hit the consoles and PC simultaneously. These will focus on quality of life improvements, including changes to the tutorial for levels 1-4 (a new mission where players will be sent to search for the crown in the crypts right from the tutorial, not from the town). Soon players level 30 and higher will get a free load out so they can change their set up — minus mounts or companions — with just the click of a button. Additionally, guild stuff is high on the list of upcoming content.

What’s in store for Neverwinter after that? Foss wouldn’t divulge where the next big adventure would take place other than to way that it will be much warmer than the frozen north (he said, “I’m tired of making ice maps!), and that folks will be traveling with old friends and teaming up with famous persons. Did he let slip it would be in a hot desert, or was he just trying to misdirect me? We’ll have to wait and see.