If you decided to eschew the purchase of a reasonably priced car in favor of buying your way to a pretend throne in a video game, you would probably want assurance that your money would be well-spent. But what if loads of other players tried to buy their way to the top too? What if there were too many kings? What if you couldn’t feel superior for having blown so much cash?

Soulbound Studios is dealing with the increased demand for Chronicles of Elyria’s $10,000 monarchies by putting a fixed cap on the number of kingdoms (and hence, monarchs) for each of its planned four servers. The new number for this “pay-to-rule” is six: six monarchs ruling over six kingdoms per shard (with 12 dukes per kingdom and 24 counts per duchy).

“We’ve been clear from the beginning that we will put a limit on the number of nobility per server,” the studio posted. “Initially it was a random number per server, then it became a fixed amount per server to make it easier for the nobility to plan. We will be, in an upcoming store update, limiting the number of kings, dukes, and counts per server. If you purchase a King package before we get a chance to put a cap on the purchase page, you’re going to find yourself either on a server you didn’t plan on, or without a kingdom.”

This change has apparently thrown some players for a loop. Player Yorick sums up the issue: “Six is a good limit. The problem is that they’ve already oversold past that limit, and now they either have to accommodate for that, or end up having to turn down a king.” 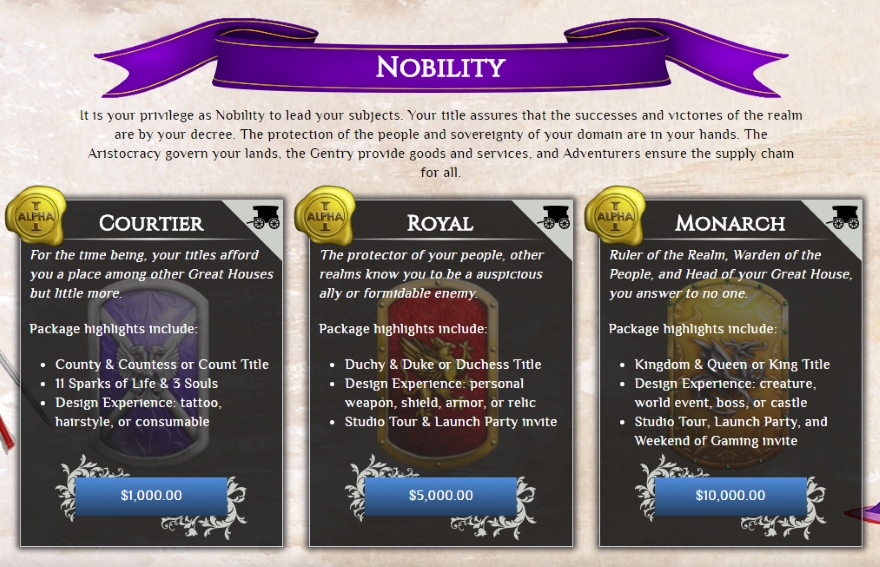 Are any of the people complaining the ones who actually paid this much? I doubt they would have time between real life jobs and scamming kickstarting.

I put 300$ on this game. I was actually undecided between this and Pantheon MMO, so i splitted my pledge between both.

I got heavly burned on KS many years a go, but i decided to give it another try. This game, Pantheon and Shardsonline (now Legends of Aria) are my only “hopes” to live again what Ultima Online used to be.

But here something is not going in the right directions. I’ve the feeling this is looking more and more similar like SotA. The richest playground.

From one part I can understand they need funds and the world and gerarchy must be decided. But this P2W (well, you don’t actually win, but you get responsabilities..), it’s far away from what UO used to be.

In UO, you could have started as simple, humble cartographer. Or writing spells scrolls. Or crafting spells books. And eventually, after years, without putting anything else other than your 10$ monthly sub, end up being a wealthy player, owning different houses with vendors shops close to the best hunting spots, and living in a CASTLE, with your true rares collectibles in your personal museum inside the castle to show off.

Everything you achieved it’s because YOU went no-life and dedicated many hours for years every day to achieve a goal. And had the same possibilities like everyone else.

Now – the big question mark – will a F2P / Poor player be able to work hard and achieve the same situation of somebody who pledged 10’000$ and is a king?

Because if the game wealth is decided only from IRL wealth, this is loosing already any meaning and wish to be played.

In my opinion, they should just use a model like Shards Online / LoA. But yes, it’s too late. LoA devs are not offering any crazy or insane pledge – or if any, it involes only desegning armor/weapons/devs meetings etc. No in-game benefits. Max pledge for such benefits is 120$. With just vanity items. And only true benefits – 1 week headstart – it’s enough 40$. This is fair. the same possibility for everyone to jump in a sandbox and shape a world with his own skill.

This will make server mergers awkward.

Yeah, once you get to this level of money, you will have lawsuits, when the game eventually goes into its death spiral, which will expedite said spiral.

Unlikely. There probably is a really great binding agreement people sign when buying this stuff, they will have no recourse in getting back a penny when the game goes poof as long as it runs for some limited amount of time first.

We’d have to see the agreement to see how long of a time it’s guaranteed, if any, for them to be able to get a refund. But don’t doubt that there is a really binding agreement there where people won’t be getting back squat as long as the game fulfills their end which they probably didn’t guarantee for a very long time. I’d guess 6 months at the absolute most really, probably only a few.

People may be very upset but they won’t have any recourse. That said the game does look sort of cool, *if* it’s able to deliver on what it’s promising. So it probably will be around a few years after release.

This is both humorous and sad.

You guys do realize that this is populating the world right…? How would the developers choose kings on release day? A lucky lottery for someone who isn’t prepared? Next thing you know 4 out of the six kingdoms fall apart in the first month. How should they populate a position in the game that has LITERALLY six seats. This game is set up to have a feudal system. If you bought in early you get to help populate the world for release day WOO HOO. If you don’t buy in early no problem the Kingdoms will be there for the taking when you hop on. So stop complaining that someone has 10k to help a game out and get a really awesome and unheard of perk for it. The king will set up the laws of the land on top of running countless other things. You have to be committed or your kingdom or it will fall apart. Something I sure as hell wouldn’t want to do haha. Yes there will be money hoarding kings. And yes you will be able to watch their Kingdom fall apart and we will both be laughing just as hard at them. I guarantee there will be countless youtube videos of single handed blunders by players and they will be on the list. But that’s not the point here. If you want to be a king and don’t want to pay for it don’t worry. Yes it may take time but you why can’t you build a guild do some treachery get some of their people who don’t like where the Kingdom is going and do a coup? I don’t think it will be very easy to take it though. So stop complaining that the developers aren’t being Opera fucking Winfrey and giving every person who buys the game for fifty god damn dollars a kingdom. Producing a triple A title isn’t cheap. Only four kingdoms were sold during the Kickstarter fyi. For the complaint of ping seriously guys if you can spend 10k to be a king you can probably afford a little bit better internet than the average person. Also, even with perfect ping taking your King into battle for every tiny skirmish would be like driving your Ferrari every day to McDonalds and parking it right next to the bike rack and not expecting it to get dinged, scratched, and greasy while your not looking. So come on guys stop jumping on the Kickstarter/Not run into the ground large development (yet everyone keeps buying their fucking garbage games) company ranting bandwagon.

If you can’t sell a game based on its own merits, you create a virtual playground for the ultra rich to play out their sick power fantasies amongst the e-plebs…err legitimate players.

People complain about mega guilds/alliances zerging everything but at least that requires some level of organization, leadership and recruitment. Now you just pay the devs 10 grand and you are automatically top dog.

Wow. Not kidding, my interest in this game just went from 50 to 0 in six seconds.

Taking p2w to an entirely new level… I was extremely unlikely to try this upcoming gankbox anyway, but this reduces the chance to zero.

Wait a second…I just figured this out.
$10,000 to be a king
+
Permadeath
=
Hmmm. Considering if anyone with an entry account can kill anyone else…I may have just found myself some gameplay that I might be interested in pursuing.

roflmao the 1%-ers will rule the game just like IRL …. omfg… /sad