END_OF_DOCUMENT_TOKEN_TO_BE_REPLACED
If you felt let down by the execution of RIFT: Starfall Prophecy, you’re not alone. In this week’s producer’s letter, Trion Worlds admits that the expansion had “shortcomings” that need addressing. To wit, the studio said that it is “pouring heart and soul into improvements” to shore up the content as it moves forward.

Speaking of moving forward, there’s certainly a lot of exciting things on deck for RIFT, starting with the imminent Patch 4.1. This update will add eternal weapons, a planar crafting revamp, a 10-player raid, and new weekly quests. Following that is the return of Carnival and the release of Patch 4.2 with its brand-new level 70 zone, Vostigar Peaks.

Perhaps the most interesting part of the letter is a discussion of a possible new server ruleset called “RIFT Challenges.” If the studio moves forward with this experimental project, the servers will feature limited-time crazy and cool rules to change things up in the world. Some suggestions include jacking up mob difficulty for a limited time and a super-easy mode so that you could see any content you wanted.

“This is still very much in the experimental stages and we have no idea in what form, if any, this will eventually be taken LIVE, but the initial idea is that you play on the challenge server to reach a specific goal, which then awards you something truly awesome for your main live server character,” the studio said. “Amazing new armor, weapons, new *cough* race *cough*… there are many details yet to be worked out and again, NO promises. No dates. This is a HUGE project that may or may not work.”

I’m in for challenges. However, I’m more in for a more organized (and in *some* ways revamped and made more reasonable to complete) achievements system.

I think I’m at least temporarily done with RIFT. Uninstalled recently and every week or month there’s something telling me that this is a fine decision.

May check later this year or next year. Maybe 4.2. But with Bioware games being more of a thing for me (whether MEA or ME3 again or DA series), maybe not. However, that 4.2 cycle does sound nice. At least I mostly don’t have performance issues with the game anymore – that used to almost remind me to stay away. Lets see how summer goes (for time and finances)!

I said somewhere during Nightmare Tide, when it was already obvious that things weren’t going well for RIFT, that the only thing that could save the game and bring it back to better days would be a miracle expansion. SFP was pretty much the opposite, and I don’t think there’s anything that can be done now.

Trion has blown chance after chance to improve RIFT, and though I was a great fan once (RIFT is my all time most played game) I’m not even thinking of reinstalling, ever.

That Trove money has made them lazy, I see…

I keep wanting to give RIFT another go, however, thanks to me leaving the game during the initial expansion that raised the level cap to sixty it’ll cost me way, way to much to get myself current. Too bad they don’t offer a ‘gold’ edition that will allow older players to catch up content-wise without having to spend a good bit north of $100.

Bullsh+t it will . What it will cost you is the price of this expansion because everything before it is now free anyway .

If you want primalist and the new souls it will cost more but you don’t have to have them do you ?

Get your facts straight .

Expansion $50. Soul pack $50. Sub (depends on package). We’re north of $100. Seems my facts are in order especially since I speciifically said get myself current with content. Never once said ‘need’.

Especially since class souls are the most unique aspect of RIFT. Defines classes and builds. I admit they’re way better now then they used to be. Last expansion it would have been closer to $200 than to $100.

Always nice how internet replies are half content half attack.

Well as I said you only need the expansion everything else is just peripheral and thus optional so all you really need is spend is 39.99 (so even your estimation on that is factually inaccurate) .

So your statement that ” Too bad they don’t offer a ‘gold’ edition that will allow older players to catch up content-wise without having to spend a good bit north of $100″ is also factually inaccurate too because you suggest players “have to” spend that sort of money but that is not the case because you can easily do everything in the game questing , dungeons ,raiding and pvp without spending anything more than 39.99 .

As for the extra souls I am part of an entire guild the vast majority of which have not purchased the souls ( because quite frankly it’s not really worth it ) and they do both pve and pvp quite successfully with the ones already provided . If you have to have them yourself that is your personal choice but instead of talking in the singular and referring to yourself you speak for others in the plural sense “older players”. And you yourself if you were so disposed would be quite easily return to Rift and do everything in the game in regards to pve and pvp with the souls already provided for 39.99 .

That is why your comment is factually inaccurate and why I called it bullsh+t . I speak as no apologist for Rift because I think this expansion has been pretty poor .

I think you will find that this reply is all content and no attack and your comments lack any real factual content on closer scrutiny and arrogantly make the assumption your are speaking for everyone rather than just yourself .

because certainly,. being crippled in your selection of classes and souls doesnt make the game incomplete at all.

Hartsman ain’t what he used to be. The downward spiral continues.

Remember when Trion was a kickass developer and people bragged about the quality of RIFT and how much they cared about their fans?

They hired a bunch of SOE refugees and the company went to shit.

Yup. And the first expansion was awesome. However, the change to F2P sent the game in a slow deathward spiral.

I played Starfall Prophecy and remember being annoyed with it frequently. The massive increase in mob health in the later part of the first zone made most fights a real drag and then I finished questing in the final zone and still wasn’t maximum level. In fact, I only dinged 69 just before the final quest. I ran plenty of rifts, some dungeons and a lot of warfronts, yet still found myself with almost an entire level’s worth of experience to grind before I could hit level 70. However you look at it, that’s bad design right there.

Yeah, it was a well-discussed lack of content. Most of the stuff in 4.1 are things that should have been in the 4.0 expansion launch. Just delayed from November until the end of March…

I’ve played Rift since the launch and for the first time ever I have taken a hiatus from it . I got one character to level 70 ( and had to grind instant adventures at the end because there was not enough quest content to make it through the last level how bad is that ) only to find the very thing I liked to do in the game namely the weekly pvp quest had been removed . On top of that the rest of my guild there is just twiddling its fingers because they all have got mains and alts leveled up and geared up and there is no raid for them to do .

It’s a mess and for a while I thought I might switch to Elder Scrolls but that game has so many antisocial players in it that I found the community to be the most toxic I’d ever encountered in an mmo ( and I’ve played WoW so that is saying something ) . If Rift can pull it back together I will take another look because nothing else really appeals at the moment .

Really ? I always found the chat to be ok in ESO. 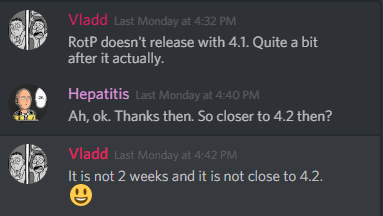 Apparently the actual raid content (not LFR) isn’t even coming with 4.1, but more than a month afterwards. So it’s looking like almost 6 full months post launch without a single proper raid.

Not to mention their discussion of “challenge servers”, which seems like them looking into new monetization methods a la EQ1/2 progression servers (requiring a sub to play them). What’s so laughable is that they think they can convince players that the dev team has enough time to create and maintain these servers in additional to supporting the live client…at a time when the live client is a fucking disaster with next to no end-game content, delays to content that is scheduled, and nearly everything that’s been added with this expansion has had to be disabled at one point for them to fix it.

So we’re supposed to believe that somehow the team can “magically” start hitting a quality benchmark on live that they’ve not hit since SFP launched, and then also maintain a second set of separate live servers.

I wanted to be more optimistic since they at least acknowledged that this expansion has “issues” (translation: it’s a hot fucking mess) and I want to see the game turn the corner, but damnit if this letter did nothing of the sort. It would have helped if they’d at least had a copy editor look it over for formatting and spelling/grammatical issues first. If they can’t even deliver a properly formatted producer letter, it doesn’t bode well for the quality of content in 4.1.

This is bloody heartbreaking to see this game continue to spiral downwards.

One of the things that has been truly awful about SP is that they have obviously no idea how to tune mobs. Some zones just have brutal mob health and density. And they are considering “jacking up mob difficulty” servers?

This does not bode well.

What’s even more depressing is that Scott Hartsman is the one running everything into the ground.

At this point I’m not sure it even matters whether they release a raid or not. All raiders are gone by now anyway.