Happy SuperData day! That’s the monthly holiday when we pore over the market analysis report, freak out over something doing well, freak over something doing poorly, and then fight over definitions, the evils of trusting paywalled science, and why more MMOs aren’t on the current list. This round, there’s lots to bicker over — but also some bits to celebrate in the February 2017 charts of top-grossing game titles.

On PC, while League of Legends, Crossfire, and Dungeon Fighter Online continue their top-three dominance, the rest of the roster has seen a bit of a shake-up, as Overwatch has fallen from #4 to #6 and World of Tanks has pushed past it as well as World of Warcraft. WoW’s status is a tad confusing; last month, SuperData began reporting Western and Eastern WoW separately, even though it does not appear to be doing that for any other game. This month, it’s omitted the West/East tags but still has two entries for WoW, so we’re left to assume to top one is still West as it was last month.

Mobile-side, Lineage 2 Revolution soared to the top spot, pushing Clash of Clans down a peg. Pokemon Go is still chillin’ at #4.

Hearthstone, however, isn’t doing so hot. “Hearthstone marked its lowest point since releasing on both Android and iOS smartphones,” says the research firm. “Revenue is down significantly year-over-year and month-over-month. Recent gameplay decisions have been unpopular with the Hearthstone community, and the result has been a sharp decrease in conversion on mobile. Desktop revenue is also down, but to a lesser extent, perhaps due to the more ‘hardcore’ demographic on PC.” 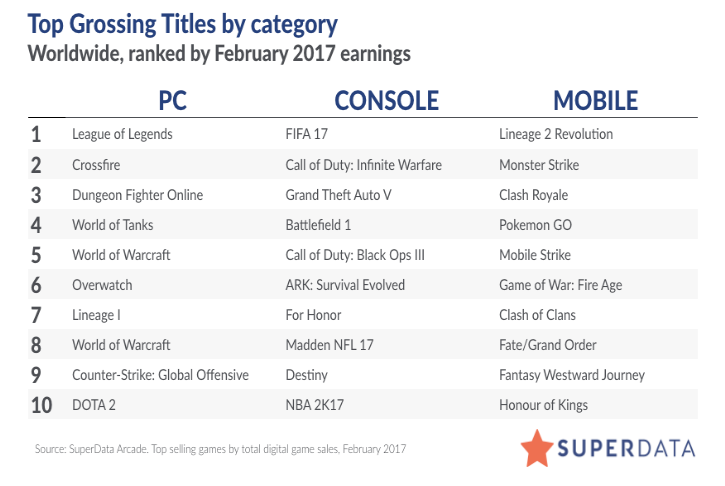 World of Warcraft is so gainful it’s featured twice in the top 10!

There’s a new graphic at the source link; apparently, combining the two instances of WoW moves it into 4th place.

Ah cool, so they merged it… Anyway it was just a joke! :)

There’s a new graphic online at that link. It combines both WoW lines into a single one, at 4th place; World of Tanks is pushed down to 5th, CS:Go and DOTA2 are both pushed one place higher, and For Honor enters in 10th.

Interesting bit about the graphic currently in MOP is that, if those two WoW lines are WoW West and WoW East, then WoW’s total revenue is no higher than double that of World of Tanks.

Wargaming makes so much bank on WoT they could afford World of Warplanes to fail. A shame, because it has superb graphics and was fun to play. It lacks some of the career mode details of War Thunder and doesn’t have bombers and things of that nature, but it was a gorgeous dogfighting game and more historically accurate than WT. I still play World of Warships too and it’s a great game but nowhere near the populations seen in World of Tanks.

GTA is shocking to me in the #3 spot for consoles. Consoles have never typically had titles that are long on shelf life even with persistent multiplayer. I guess that’s why we are seeing more games like COD Infinite where other companies have taken a gander at what Rockstar has done with a single game and made this persistent thing that doesnt require a yearly release to be profitable.

Dammit! I bet on World of Tanks to show. Out of the money, again…

Not surprised really. Its been a solid year of my few remaining friends playing Hearthstone just seeming to get mad about being stomped by the one meta deck that lords over everything else. Its a CCG so thats going to happen but in Hearthstone where you can magic cards into other cards its easier to make the curbstomp deck and thats both not fun to play, lose to or see a total lack of variety.
Hearthstone is a charming idea with a nice art style but it was never going to be a long term monster success by the very nature of what it is.

The Lovecraft release destroyed the game for me. It all became aggro decks and therefore boring. I havent played in months.

I stopped when naxx showed which way the wind was blowing but yeah thats basically why everyone i know playing it up to old gods quit.

I can’t spend on Hearthstone because you never own the cards. Money spent on Magic — those are cards I can lend my friends, use to teach someone else to play, and maybe pass on to my kids or something.

I understand that I’m doing the same thing buying skins in LoL or pets in WoW, but for some reason it feels different to me in the guise of cards. Maybe because there’s a physical alternative.

I don’t necessarily think it’s because of its CCG nature that Hearthstone is having issues… it’s really just Blizzard’s utterly terrible decisions, their inability to create a vibrant meta (even MTG is dominated by net decks these days… but at least there’s usually 3-4 diverse tier 1 decks) and most recently their absurd price hikes for lots of places outside the US.

I honestly think the only reason it’s not doing worse is Blizzard fandom… Cause most of the other online CCGs are way better than Hearthstone in most every way.

Admittedly, I’ve been doing less Hearthstone myself, but it may just be that newer titles (especially from Nintendo’s app department) are grabbing my attention more.