One of my favorite MMO April Fools of all time is Guild Wars 2’s playable Super Adventure Box. It’s so brilliantly designed and executed that it goes far beyond mere joke territory and became an institution. A fun game-within-a-game.

Reader Little Bugbear took advantage of an initial foray into SAB to take what I consider to be a very arresting picture. It’s almost a silhouette of a character lounging against an 8-bit skybox. “Sometimes it’s nice to just sit back and enjoy a nice day of gaming,” Little Bugbear said.

Before we get into the rest of this week’s lineup, I want to share the news that we’ve made some further improvements to our comment system that should allow you to share your screenshots in bigger and bolder glory, especially when you post one at a time! 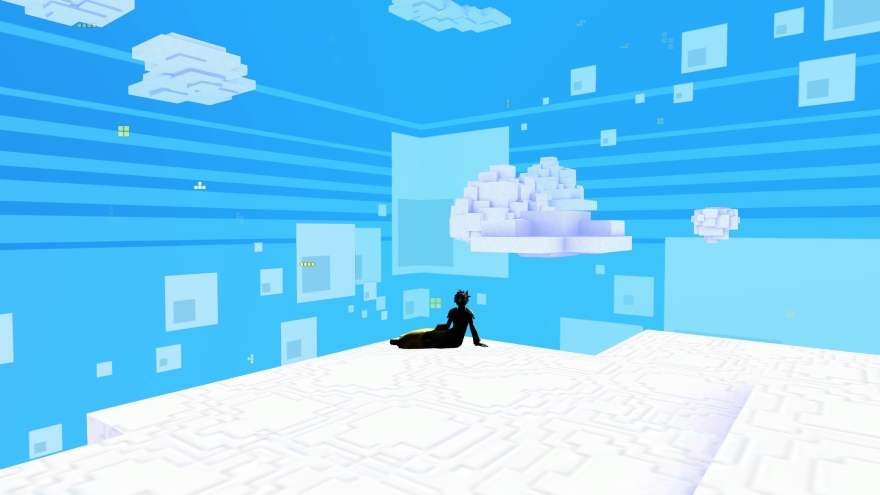 “Here’s an unintentional up close and personal picture from Blade and Soul,” posted Rafael. “This cap is busy, but I love it. See, the thing is I was looking through all of those quests on the right trying to figure what to do next while I waited for a raid to pop. And when I glance back at my toon, Yalie, she is looking back. Yeah, it’s just one of those things that games of this ilk do now days. But it was very cool. And her smile and expression are priceless. Almost as of to say. ‘Chillax, dude. We got this.'”

Liandreth reminds me why I keep wanting to play Albion Online despite the subscription and gankbox focus — I love the graphics and camera angle.

“Here’s a really nice shot of a waterfall I found whilst wandering around in Albion,” Liandreth  writes. “I did want to get up close and personal. It’s pretty.” 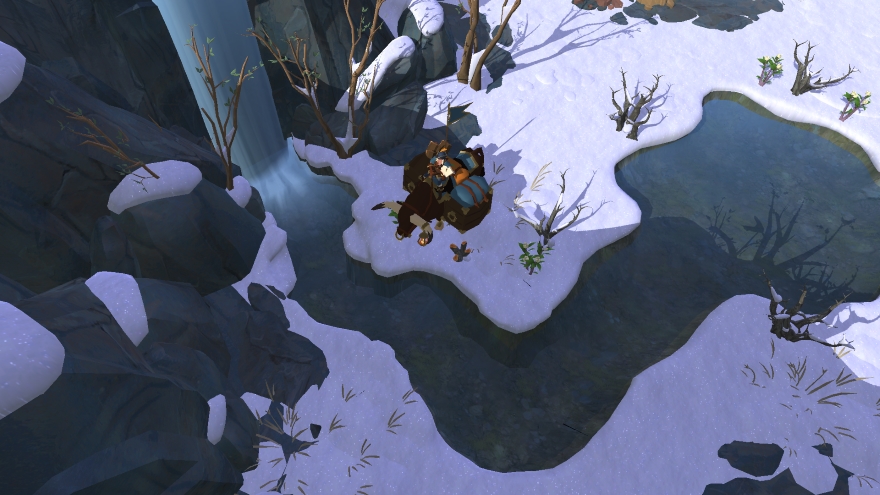 “When I first arrived at Grahtwood in Elder Scrolls Online, I tried to capture the sheer grandioseness of it’s size and beauty. Of course, I added the cheese of an action pose,” Wanda said.

Hey, no judgment here! If you can’t do cheesy heroic poses in MMORPGs, where can you do them? 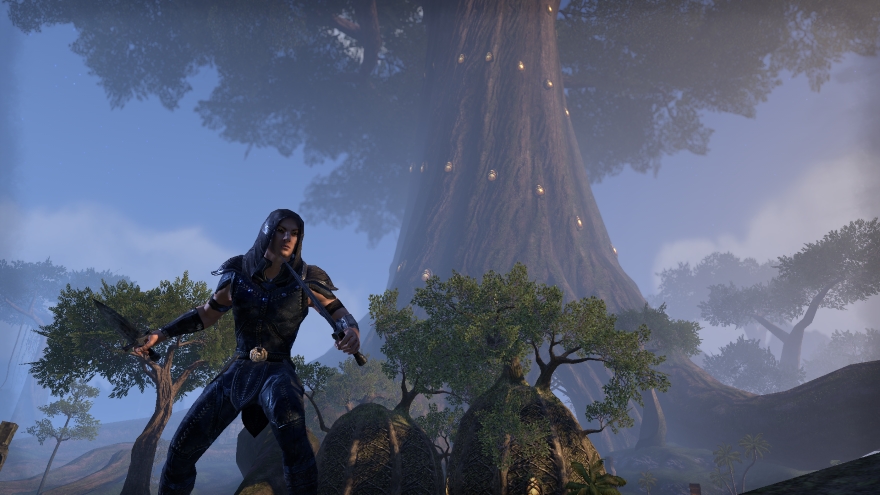 Everyone seemed enthusiastic about my “up close and personal” challenge a couple of weeks ago, even if it resulted in some inner trauma. Poor Wild Abyss got too close with one of RIFT’s wildlife and came away haunted for life: “This is closer than I ever wanted to get. Milking space bug things… not even once.” 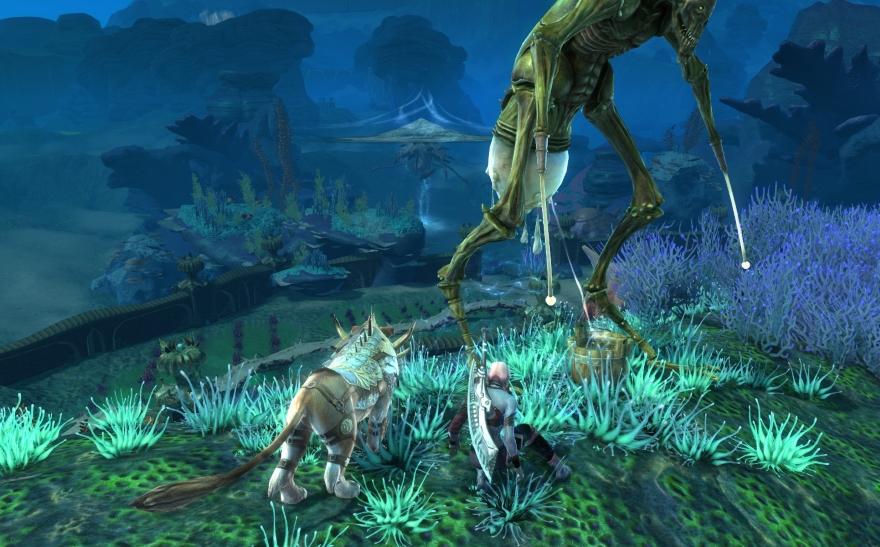 Screenshot challenge time! This week let’s look back at our starting steps in MMOs by sharing pictures of fledgling characters and our favorite beginner zones.

Beginner characters in starting zones… I don’t think I ever screencapped such a thing! Also, any of the MMOs I would have the interest in doing that with just at the moment would not be true to form, as they are all things I have played and experienced before.

Had a good week. Stuck close to the bubble and ran bunches of sightseeing missions before tomorrow’s big nerf. Then it’ll be out into the black again…

1) Approaching a water world from its dark side. 2) Docked at ITO Orbital, my home station. 3) The Pleiades from a distance on approach. 4) Gravity lensing from Maia B, the infamous black hole, twisting the Pleiades and galactic core. 5) A large ring system around a terrestrial world in HR 7221.

ANSEL super-res pic from ARK. This is the smallest setting, 12K x 7K. It can go to many gigabytes in size. The detail as you zoom is unbelievable.
https://goo.gl/photos/SF4APyJtYpwEV5R18

Image one: I got this shot while hanging off of a helicopter fleeing the Goblin starting zone.

Image two: The glow effects in FF14 are so nice. I just had to take this shot.

Image three: My first character in WoW was an Undead. So I’ve always had a soft spot for Tirisfal Glades. It has an eerie always Halloween gloomy feel to it.

Image four: Is my first Wow character. I lost all my old pictures of her on my last rig. Look at her now, all grown up.

Technically that is one of the starter zones the Goblins “blew up”. o.O

Here is a another early oldie. The drop in after character/car creation in Auto Assault.

Really old, vanilla WoW screenshot of my first character in the game. And Atlas Park from up high after getting full fight in CoH.

Some digging turned up the oldest MMO screen I still have, date has it October 2006 so I believe this is from Vanguard beta? I think the character was a monk and obviously posing in front of some harbor city.
It’s been a while, details are a bit hazy ;)

Sweet! Thanks for the shout out Justin. I love unintentional caps. They are the best kind.

Ok, for this week, I can’t go back as far as I like. My really old pics archive is on an old failed HD. Luckly I may be able to recover the data but it will take some work.

In the meantime here is an oldie of one of my first toons in SWTOR. This is the moment I realized SWTOR was my new MMORPG home.

“…pictures of fledgling characters and our favorite beginner zones.”

I jumped back into TERA a few months ago, and been having a nice go of it (so much so, that I’ve since subbed to “Elite” status). I was very happy to see that the old starter area, The Island of Dawn, had been re-vamped…and replaced with what is called The Lost Isle. It is more streamlined, and less cluttered. I always thought TERA does great things with colour (especially with my monitor on Scenery mode), and I appreciate the palette used in most locales, including the introductory zone.

The “Fel Tainted Menagerie” I posted below is just under that pink tree pictured above actually. :)

PS: Err…your post got me curious about the Island of Dawn (the original start zone). So I was going to take some pics there, because it was a lovely zone. But to my horror , when I arrived, I knew right away that was not going to be possible…as the zone in question has some considerable “renovation” done to it. And is surrounded by level 64 Basilisks, which I am not at a appreciable level to deal with on that character. Sorry…

Four years ago, in early 2013 while exploring the zones of LOTRO’s first Rohan expansion, I came to the Falls of Rauros. Standing there at an ancient lookout, facing south-east towards Gondor and Minas Tirith, I dreamed of exploring these planes and wondered what Gondor and the White City might look like. Alas, important business required me to turn west into the heartland of Rohan instead of south. Later, fate (or rather Turbine/Standing Stones’s lore monkeys) sent me through the Paths of the Dead to the southern shores of Gondor and so I approached Minas Tirith from there, from the south.

Yesterday, when exploring one of LOTRO’s recently added zones, this journey of four years came to an end. I wandered the swamps I had already seen in 2013 from atop Rauros and approached these iconic water falls, this time from the south-east. There is even a path leading up to the very point where I had been standing four years ago.

Gladly I have screens of this: the first screenshot below, taken in 2013, shows the view I had back then. The second screenshot shows the lookout where the first shot was taken, but this time seen from the south and in 2017.

For me, the fact that such an experience is possible in LOTRO shows that the devs working on it have really understood what it means to turn Lord of the Rings into a virtual world. And I like that this is not even mentioned much in the main quest line (though I haven’t completed it yet; might come later). Instead, it’s just a small detail you can create your own little side-story with, if you like exploration.

The Daily Grind: Have you ever been hit by an MMO banhammer?