END_OF_DOCUMENT_TOKEN_TO_BE_REPLACED
I’ve mentioned many a time that I like Funcom quite a bit. I want to like Funcom quite a bit. Heck, I want to be excited about Secret World Legends, but every day or so I get reminded that such a course of action will be very difficult at the least. Because quite frankly, Secret World Legends seems to want me not to be excited about it, as evidenced by… oh, every single thing that Funcom is doing around it.

Which is odd, because Funcom literally has access to a playbook for a large-scale reboot.

Secret World Legends is coming off of The Secret World, which was a cult MMORPG classic with a mighty fan following. Final Fantasy XIV was coming off of… well, its initial version, which had a fan following full of people who admitted that it was halfway to Stockholm Syndrome. And yet that game managed to get people excited and earn fans, while Funcom seems dead-set on alienating people or making them just plain nervous.

Let’s start with the obvious elements by pointing out the stuff that Funcom definitely cannot do. Unlike Square-Enix, Funcom cannot continue updating the “old” version of the game regularly while developing an entire new version. The money just doesn’t exist for that within the company. I mean, we barely got updates for TSW before, so it’s not exactly creating a new problem. They also can’t match Square-Enix in sheer volume of press releases. And they’re never going to have the sheer personal charisma of Naoki Yoshida to serve as an anchor to the game in the same way; the dude cleans up like a rock star, and that certainly helps.

But there’s lots of stuff that they can do, starting with one of the most important things that players were told about from the start: progress is not lost.

One of the first promises made about FFXIV‘s reboot was that you weren’t going to lose anything. You would retain your levels, your skills, your items, all of that stuff. Yes, there would be adjustments, but players knew right from the start that you were not going to be floundering about and redoing everything. Funcom dropped the ball on that immediately, stating in no uncertain terms that players were going to lose everything right off the bat.

Not that it matters quite as much, because players still aren’t really clear on how much is changing, or how, or why. That’s another important thing; Square-Enix was eager to talk up all of the cool stuff about the game, enough to really improve player engagement. SWL seems reluctant to even mention what’s going on or changing, and while we’re told that it’s “too early” for some of these mechanics to be discussed, there’s currently nothing to discuss, as everything is locked down behind the closed beta and NDA.

Remember, in the time leading up to FFXIV’s rerelease, Yoshida repeatedly talked about the philosophies going into the game and what he wanted to deliver. The result was that even though we didn’t always have mechanical details, we always had an idea about what the game would be like. A vague one, sure, but an idea just the same.

Of course, there’s also the fact that FFXIV’s rerelease plans suggested the devs knew exactly what was wrong with the game. That’s another area which was clearly and transparently discussed. By contrast, SWL has just… given us a couple of big changes, some of which addresses actual problems, others of which address problems no one has ever actually had with the game.

I think it’s interesting to discuss this in light of yesterday’s bevvy of statements from Joel Bylos about survival sandboxes vs. MMOs, which sound like insight… but they’re really not.

“[In] The Secret World, we focused very strongly on making really cool and interesting content and story, and the idea was to make it interesting to play. The thing is, with an MMO, a lot of focus goes into repeatable content. A lot of focus goes into things like ‘I’m gonna run this dungeon six times’ or 20 times or 200 times, right? So we need reward systems that give you tokens, that let you build or buy better items. There’s a lot of itemization discussion in MMOs. In a game like Conan Exiles, people are going to lose stuff, and we know that. We need to make it so that they can keep rebuilding stuff, keep creating stuff, keep progressing in the game, but not necessarily wanting them to go, ‘Oh, I want you to go grind this dungeon 50 times so that you can do the next dungeon – slightly harder.’ So [Conan Exiles] is not so much about this very small percentage of power increase to increase your character’s progression. That’s what I would say is a big difference in these type of games.”

The comments might, however, serve as insight for where things are amiss.

See, when you design a game that people are going to be playing for an extended period of time, you are intentionally designing repeated content. That’s just as true for survival sandboxes as it is for MMOs. No, Conan Exiles doesn’t have the same sort of repeated content as, say, a Final Fantasy XIV dungeon, but it’s still repeated content. “I lost everything and need to rebuild” is different from “I need to go through this dungeon and kill things,” but both are 100% repeated content meant for doing over and over.

According to Bylos, the problem was that The Secret World had so much story, but you need to have a focus on repeated content. That’s not actually the problem. The problem is that while the story in TSW was (and is!) fun, the repeated stuff is… less so. It requires leaning a lot on the game’s combat (which isn’t good) or re-doing steps of a mission you’ve already done (trivial or obnoxious, and neither fun). There is not a whole lot of repeated stuff to produce long-term investment. There’s little to no crafting, no methods of long-term investment beyond repeating the same stuff.

When FFXIV was being reworked, there were a whole lot of polls for current and former players and lots of discussion about what the game got wrong. Combat was fiddly and not very fun. The UI was outdated from the moment it launched. Crafting was too incomprehensible, gathering was far too random, and working together as a group wasn’t enjoyable. Those areas were things targeted as specific problems to be reworked.

On the other hand, the strong focus on lore and story? Not a problem, and if anything, it was a strength. No, you couldn’t repeat all of it, but you didn’t need to make it repeatable if there was a lot of it to do and if players enjoyed the actual mechanics of the game for the stuff that was repeatable. 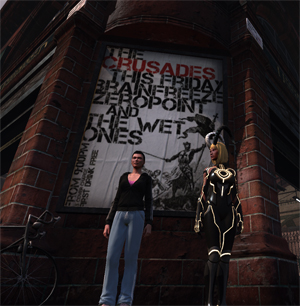 I get the sense that Funcom doesn’t know what was actually fun about TSW, and now it’s developing SWL without really understanding why people got turned off from the game in the first place. And so it’s alienating the existing fans while doing nothing to attract new ones.

That’s the last big lesson, right there: FFXIV did a lot of work to make sure that existing fans wanted to come back and got benefits, while new fans didn’t feel screwed out of the gate. SWL has yet to really do much to incentivize old players to come back – you keep the stuff you bought, but not your character, not your progress, not anything beyond those actual money purchases. Meanwhile, new players don’t have a clear picture of the game beyond “isn’t it that buy-to-play title that had awful combat? Is the combat better? Is it still an MMO?”

And that’s what baffles me the most. FFXIV made it clear that when you’re doing this kind of reboot, you need to know who your audience is and what new audience you intend to court. Darkfall, for all its failings with its reboot, did a good job of that at the very least (the fact that it didn’t work is, in this case, not really the point).

I don’t know who the target audience for Secret World Legends is supposed to be. I suspect it might be me, but considering that the MMO properties of the game were something I considered a positive, I might be wrong. And if I’m unsure about this – me, a dude who more or less lives and breathes this stuff – what’s going to happen when someone who doesn’t do MMO journalism for a living steps into the field and asks about this game?

It’s a whole lot of work to revitalize a game that really just needed a major combat rework and maybe a free respec. That would have done it, and we wouldn’t be arguing about this now.