The classic break-up line is “it’s not you, it’s me.” It is, of course, usually a lie, and it often gets followed up shortly afterward with a line that makes it clear that it is really you. But it’s still a not-terrible way to ease into a breakup, to convey the idea that you want to move forward without bad blood between you.

So I’m sorry, World of Warcraft, but it’s not me. It’s you. It’s really on you. And a little bit on me, perhaps, but the parts that are on me have more to do with the fact that I’m aware I have better options open to me. It’s like declaring that you won’t go to Dunkin’ Donuts any more when the store in your area is constantly on fire; a bit of that is on you, but you could put out the fire.

Wait, I already did that fire joke, didn’t I? Let’s move on. 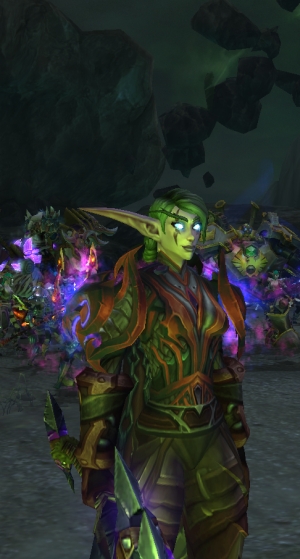 Some of my desire to leave has certainly been spurred by recent events. The whole “scale to item level” nonsense was not the deciding factor which made me say that I was out, but it sure did join the chain gang of reasons I had to step away from the game again. Similarly, the expectation (not yet realized) of upcoming content droughts is in the back of my mind, but at this point that’s entirely speculative. It’s not fair to blame the game for something I expect to happen which has not, in fact, actually happened yet.

If it does happen, I might give myself a satisfied little nod for leaving early to avoid the rush, but who knows? At that point I might be back in the game for whatever reason, even if it seems increasingly unlikely. The point is, I’m happy to put both of those issues down right away and move on.

No, I think the decision really came to me months ago, when Blizzard gave an interview that said, in no uncertain terms, that people just… leave the game every so often, and then they come back, and there’s absolutely nothing that can be done about it. So the game is now being designed according to that principle. And the problem is that it shows.

Randomness is a terrible long-term design. If you want people playing consistently for a long period of time, the less randomness you include, the better. If you have a chance to get a thing, people will stick around for a few repetitions, but each flub on that chance makes it less appealing to stick around. If you have to keep playing for five weeks to get a thing, by contrast, you have a pretty clear picture of what you have to do; you might have to wait five weeks, but after five weeks you’re in the clear.

Legendaries sent up some pretty big red flags right from the start, and I’ve complained about them before. But the game has doubled down on that same randomness everywhere. Random rewards. Random upgrades to random rewards. Random chances to get random quests for rewards which, in time past, would have just been earned through reputation. It’s all chance-based.

Irritating enough on its own, but then Blizzard has done its level best to make it as annoying as possible to actually get through non-luck-based content. And… some luck-based content, even.

The Mythic Keystone system, for example, is an interesting idea. It combines modifiers to dungeons that you’re already doing over and over, so you can have new kinds of fun in the dungeon and earn new rewards! Except you have to manually form a group (you’ll never be allowed in a Mythic group as DPS without enough gear to not need it) and wait for people to show up, at which point it slots squarely into the level of content irritation that makes it just not worth bothering.

“Oh, but those dungeons have complex mechanics!” If your point of comparison is no mechanics, sure, but the last fight of Vault of the Wardens Mythic is literally the final boss of a leveling dungeon in another game. A leveling dungeon you absolutely have to get through that people manage just fine, on the regular. Not to mention that the Keystone system mostly just adds more numbers and a race element, porting over the most obnoxious elements of WildStar’s dungeons while adding nothing positive on besides.

Combine that with the randomness, and it seems as if Blizzard has collectively listened to exactly the wrong lessons. People have talked about how much they like dungeons and they like doing dungeons, but instead of hearing the message, the goal seems to be “make progressing in dungeons like progression raiding.” I’m sure there are a couple of people who wanted this. Maybe it’s even the majority.

But for me, the things I liked about dungeons were how they were not like raiding. They were fun, light, and quick ways to bang through content for a steady process of rewards. I could jump into a dungeon, have fun, and then jump out, and I worked toward rewards. That’s why when I talk about loving Wrath of the Lich King’s dungeon model, I make a point of talking about loving the dungeons. It wasn’t just having smaller parties, it was the very nature of the content and reward structure.

Putting more focus on dungeons while gutting the parts that I liked about them just makes me not want to do dungeons, either.

There’s also some notable issues with the expansion’s general storytelling ethos. The game seems to take place in some bizarre universe where story quests show you Illidan Stormrage being a whiny pissbaby right before the game tells you that he’s totally right for being a whiny pissbaby, and it also spends a lot of time talking up the Burning Legion before not actually having them do a whole lot. Which is a shame, since there are so many bright points to the story, lots of characters with interesting arcs or unusual viewpoints who I enjoy running around with.

And this is all without the problems around artifacts. It’s bad enough that the added levels are entirely meaningless; you gain no new abilities and really could just have started and stayed at 100 while leveling your artifact with no adverse effect. But artifacts have gotten kind of… bad with the most recent patch. Adding new traits is kind of gratuitous anyway, but adding new traits with even more insane requirements and Artifact Knowledge levels to render those insane requirements irrelevant? It’s a counterbalance to a counterbalance to a counterbalance, a fix that ignores a base-level problem.

The shame is that this comes at a time when a lot of things are being done correctly. The class design in this expansion is really great, for example. But there are just so many troubles that shoot through the whole game, so many indications of design that seems built to make people get upset and leave before they notice the next year-long drought of content.

And there’s the fact that the developers seem to treat this as if it’s a rule of the universe rather than a product of specific actions and decisions taken. The most recent interview Hazzikostas offered, for example, makes it clear that Artifacts are just going to be tossed away after this expansion. “Everything we add contributes to design bloat.” Of course it does, but that doesn’t mean you abandon it after one expansion. You build on things, slowly, make choices about how much you add at one time. You develop. You improve.

By throwing things away constantly, you send the message that there’s no reason to bother right now. Why should I work on leveling my Artifact? It’s only going to be shelved as soon as the next expansion launches. Nothing is even remotely stable. I might be playing the same character, but the philosophy has moved away from creating expansions to creating entirely new games each time around.

Do I hate the game? Of course not. But I’m not having fun. And with this expansion being the big push to revitalize the game, that’s a bad sign. Instead of fixing the problems of the last expansion, this feels like it’s fixing the surface troubles while doubling down on the underlying structural issues that lay at the heart of the matter. It fixes the problem of irrelevant dungeons, but it does so by making them into exactly the sort of content that people who prefer dungeons don’t want to do. It fixes certain hard reward caps, but it does so by adding even more irrelevant random chance to the game. It focuses so heavily on making each new reward feel exciting that it doesn’t make the process fun.

It’s not, as some have suggested, resources being diverted from World of Warcraft to non-MMO titles. It’s a case of treating player dropoff as if it’s not something the developers can control, like these decisions which make for a fun initial rush followed by an unpleasant slog aren’t specific bad choices. And frankly, I’ve got better games to spend my time on right now.

So, yeah. We’re breaking up. It’s not me; it’s you. You were fun, and you did some really great stuff back in the day, but at this point I feel like you’re trying to make me remember the good stuff without actually doing it any more. You’re so insistent on trying to amaze people with something new that you never build on your own foundations. You made a big push with this expansion to apologize for what you did wrong last time.

And yet, in the process, you showed off exactly why you made those mistakes in the first place, and why you’re going to make them all again.

Here, let’s close this out with a song. You guys like William Shatner, right?

World of Warcraft: Dragonflight’s four factions are more involved than in...

The Daily Grind: What’s the most challenging boss fight you’ve ever...