Back in April, Silverhelm Studios told players it was instituting “big changes” in the way it was rolling out information for City of Heroes-inspired indie MMORPG Valiance Online, with a renewed emphasis on transparency. So far it’s delivered on that promise, as over the course of just the last few weeks, it’s begun posting development roadmap snapshots, mulled over sidekicking, previewed in-game buildings, and posted a map of the game world.

This week, it’s posted another look at the city hall of Skyeline, a tiered building with more lore than you can shake a cape at.

“The final structure that stands today is as glorious in appearance as it is in capability. Made from an amalgam of composite and newly generated Haelan brand synthetic metals, City Hall is a bastion of gleaming silver, mirrored glass and alabaster stone. It has multiple floors that begin on the lower second tier of Skyeline’s layers and proceeds twenty stories tall to end above the third tier. The building’s bowed hexagonal arch shape allows visitors to the city to walk under city hall to the Prisma Celeste and Memorial grounds beyond. A series of white marble and bronze accented stairs leads up either side of the main entrance to the many offices of the various departments contained within.”

“On the lowermost structure, there is a civilian parking structure as well as a minor police and national guard depot that is capable of defending the building in the event of an attack.

“Viewing the rear of the building visitors see the tiered levels that gradually steps down in a hexagonal crystalline shape. A wide pathway extends through the arch of the building and over three hundred yards towards the Prisma Celeste. White marble accented tops mixed with bronze and windowed offices line each side of the building. A series of hexagonal shaped gardens and matching aerial landing pads sit on multiple levels of the lower roofs, and illuminated railings give a dynamic geometric light show at night while still showing a classy throwback to the city’s distinguished past.”

There’s much more lore to the hall (spilling over into the lore of the gameworld itself) on the official forums. 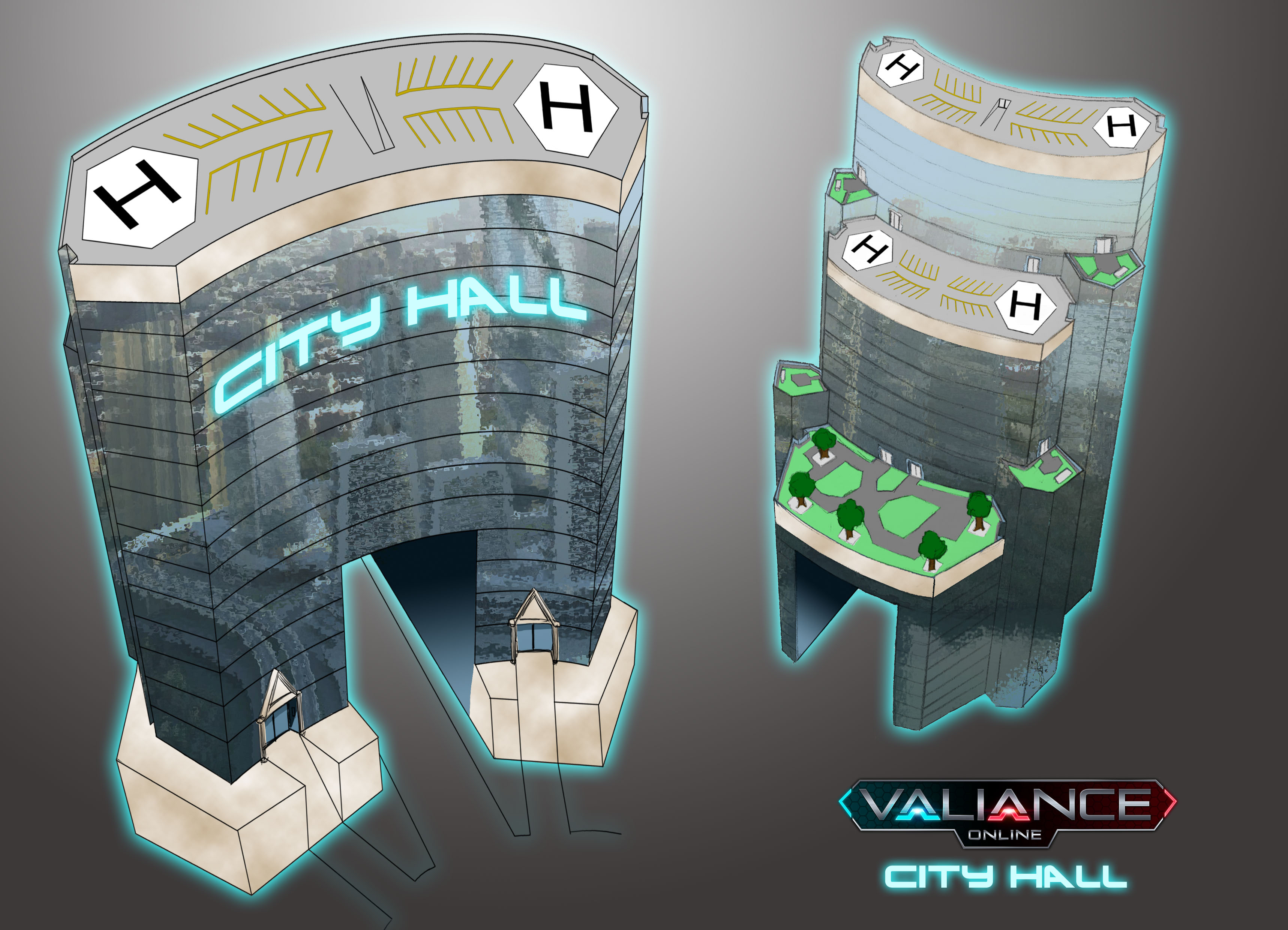 Can I play as a Villain in this game?

Okay, I know this is a super hero game, and that you probably need civilians to save here, but what sadistic (alternatively “school of life” educated) architect places two helipads like the two lower ones there?

I bet the same architect that designed all the ventilation shafts in the Deus Ex games.

Maybe it’s a homage to City of Heroes’s chaos architecture.

No, *THIS* is the homage to CoH’s architecture…. (at least based on the mission maps)

I got a feeling that’s Shop’ped. Though in away it kinda reminds me of this residential building we’re getting in The Six (Toronto)….which will not be Shop’ped. o.O

Actually that is a 3d model

Now you and your /upvoter are pulling my leg and pigtail. While sure it’s a “3d model” in the vaguest of terms…I am unaware 3D models are that large, presuming you are speaking of models developed by 3D printers. Therefore, it’s quite likely that structure in question was supper imposed into that scene using photo manipulation software. If not, then please provide the source of this installation to clear this up. Thnkx.

I mean the entire scene is inside a computer

Oh, you’re saying this digitally generated using software other than Photoshop. Gothcha! Thanks for clarifying. Thus my pigtails sit corrected. :)

chuckles. No crosswinds either I’m sure :)

They are propelled by energy and balanced by advanced AI so not really an issue.

It’s a superhero game that takes place in the future. Those are for future-tech aerial vehicles (smaller than a helicopter) or of course people who can fly (the “green landing” is for such people as well.