If you were a little bit puzzled by Trion’s announcement this week that it was changing the name of RIFT’s latest expansion from Starfall Prophecy to Prophecy of Ahnket because it had “recently become acquainted” with a children’s charity called Starfall, welp, get in line behind us. It turns out that there’s more to the story.

Massively OP tipster Clowd dug up a lawsuit that sheds light on what happened behind the scenes. A trademark lawsuit – Starfall Education Foundation v. Trion Worlds, Inc. (CN 1:2017cv00650) – was filed in a Colorado district court back in March but was apparently settled out of court at the tail end of April. Connecting the dots, one might assume Trion had been sued over the name and decided to change it as part of the settlement agreement, in a decision that wasn’t quite as amicable as the producer’s letter implied.

We reached out to Trion’s PR yesterday to ask whether it wished to amend its statement about the motivation behind the decision; in particular, we asked whether the trademark was checked prior to Starfall Prophecy’s launch, whether Trion believed it might have prevailed had it not settled, whether the free giveaway of the expansion was part of the settlement or merely a marketing move, and why, if Trion was prepared to change the name, an agreement wasn’t reached prior to the filing of a lawsuit.

“Yep, that was indeed how we became acquainted,” Trion’s Scott Hartsman told us. “Sure, a phone call would have worked too, but they’re good people doing good work and I felt this was the right thing to do. This weekend’s promo was already scheduled – our changing the name just gave it an easy theme. Everyone wins.”

Either way, at least players can rest easy knowing that Trion had a really good reason for changing a live expansion’s name and isn’t just high on poprocks or something. Now, whether you’re worried about the freebie promotion of the expansion — that’s something else entirely.

MMORPG vets will recall a similar type of lawsuit being filed back in the early aughts by Mythic Entertainment, which sued Microsoft over the name of its game Mythica. Mythica was ultimately canceled and the suit was settled, with Microsoft handing over Mythica’s trademark and domains to Mythic. 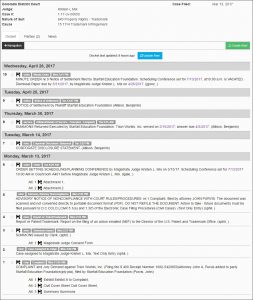 Source: PACER, Justia. With thanks to Clowd!
Advertisement