END_OF_DOCUMENT_TOKEN_TO_BE_REPLACED
href=”/tag/elder-scrolls-online/”>Elder Scrolls Online chapter of Morrowind started this week. Unlike other times that we’ve streamed together when most of what we did was questing, we just explored the island this time. Although part of that time was spent just figuring out my mic situation, it was a fun way to see the island and a very interesting way to play the game.

When MMOs and I were young, I hopped into Ultima Online not having a clue how to play the game. I saw miners running around naked supposedly because ore was heavy (and the threat of ganks was real). I saw people standing just outside the city carefully poking each other with low-level knives to help them gain experience. I also saw people standing around the bank barking, attempting to sell their wares. None of this was actually questing, but all of it was a legitimate way to play the game.

Elder Scrolls Online is a unique game, far apart from your standard themepark-style MMO. I would still call it a themepark, but it veers from the standard World-of-Warcraft-style themepark in many ways, chiefly in that you don’t have to follow a singular path to get a lot out of the game. In fact, have come up with some alternative ways to enjoy the content of Morrowind without following the main questline.

Since the beginning of MMORPGs, exploration has been a cornerstone to playing in the genre. However, more recent games, especially the WoW clones, have stepped away from what I consider this integral part of the MMORPG experience. Thankfully, ESO Morrowind actually pulls this playstyle back to the forefront.

In you watched the livestream on Monday, you’ll see that MJ and I just picked a direction and followed it. Most of the time we were off the beaten path. In fact, Vvardenfell’s paths are twisted and windy; staying on the path could offer more trouble than just following the shortest distance from point A to B.

There are, of course, already people who have made addons that take away a lot of the exploration fun by marking everything on the map for you, but I would suggest disabling those addons before jumping to Vvardenfell. Look for things like Azura’s shrine, Skar, and many, many Dwemer ruins. I’d love to hear about some of the things you find just wandering around. 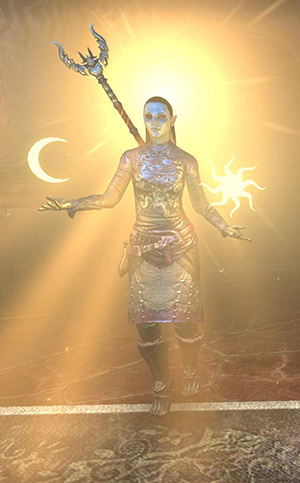 Regular readers of this column will know that the Thieves Guild was my favorite DLC for the game, and they might also know that it was the introduction of the Justice System that made me reconsider the game after originally dismissing it as just another themepark game. Although thieving and murdering your way through the game isn’t exactly the fastest way to level up, it does earn you skill levels and can be a lot of fun because nearly every single NPC can be killed or stolen from.

When compared to the mainland, the island of Vvardenfell is more heavily populated with NPCs per capita. This makes finding someone to rob that much easier. However, in my initial search for Outlaw’s Dens only turned up one: the one in Vivec City. It’s possible that I missed others. Maybe there is one in Sadrith Mora or Balmora, but I missed them. Regardless, that means there might be a lot of trips back to the main cities after going on a spree.

Just as in the original Morrowind, questing in ESO Morrowind starts in Seyda Neen. But that also means that everyone else will be there, too. I like to quest with people, but having a crowd of 20 characters all gathered around the same NPC attempting to grab the same quest is the opposite of fun. That’s why I suggest an alternative starting location for your questing. 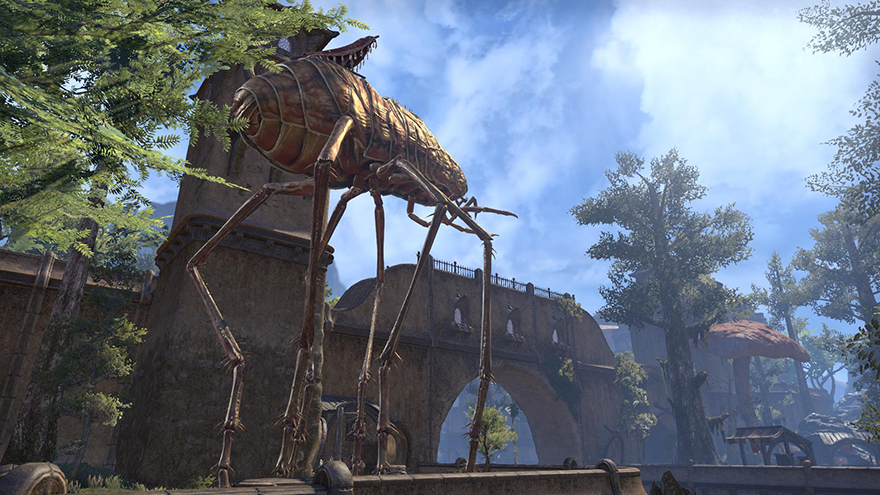 Of course, you might be thinking that getting to the northeastern side of the island will be extremely time-consuming. The truth is that it won’t take long at all thanks to the silt striders. The wayshrines will not be open to you until you actually arrive, but if you walk to the silt strider tower, you can ask to be transported to a farther away location. When you do that, ask to be taken to Tel Mora. You’ll be taken to the station between Vos and Tel Mora. Head south from there and you’ll run directly into the wayshrine and a quest giver that will start the Vos questlines.

From there I suggest traveling south along the Azura Coast. You’ll eventually run into more and more people, but with an expansion as popular as Morrowind, you’re bound to run into some overcrowding, but at least you can try to avoid it for a little while.

Lastly, if you really like dungeon crawling but want to mix it up instead of just queuing for a public dungeon, I would suggest looking for the delves. These dungeons are open to the public to dive in whenever they want. Sometimes, these caves will have other people floating around in them, so you can join them in killing the random monsters or just strike out on your own. If you want to find delves yourself, I’d suggest looking around the base of Red Mountain on the eastern side.

Morrowind has really been a lot of fun for me as I was testing it, and now that it’s live, I’m excited to share my experience. If you can think of other alternative ways to enjoy this ESO chapter, let me know them in the comments. And I will see you next time.

Question.. this is the first time I’m playing seriously since One Tamriel launched, and with it am leveling, so how do I gear up?

In the original zone for my level, I’ve simply out leveled it completely, like five levels beyond it already and only half the zone done, so the quest rewards are now useless for gear. Is there a way to gear up beyond crafting the stuff for myself?

Drops and quest rewards should now scale to your current level. It may be that’s not the case for quests you had in progress prior to One Tamriel, but certainly every quest you pick up since will scale rewards to the right level.

The same is true of random drops from dungeons, delves, or out in the world. If you see a set whose bonuses you like, bookmark where you got that set in your mind, because you can come back at max level and acquire a higher level of that set from Delves and world bosses.

Good advice. I played my first couple of alts through ESO prior to One Tamriel, so they followed the original leveling route of the zones. Since then, however, my other alts have wandered in any old direction at will, picking quests and exploring delves as the mood takes them. One of them is stuck on Stros M’kai, unwilling to leave because the beaches are so nice.

It’s been refreshingly relaxing, not least because none of the other activities in ESO are level-locked and so there’s never any rush to get to level cap in order to experience the rest of the game.

I plan to roll a new Warden. Level him up through the old main storyline and content and then dip my toes into Morrowind itself. The old world is so large that I still haven’t seen all of it.

Im doing it in the reverse way. Morrowind isnt enough to hit max level. Figure ill probably be somewhere in the 25-35 range when im done taking my time going through it. Then ill jump into the original game storyline and play that through. Just seems more fitting for the warden.

I think I’m doing a little of both; I’m banging out the main storyline with my warden at least until I get back to Coldharbour, maybe doing some Fighter’s and Mage’s guild stuff on the way, then it’s back to Vvardenfell. Those extra skill points from the main story quests are just too good to pass up this early on.