Worlds Adrift’s closed beta has just begun, Bossa Studios just announced. “If you’ve played the game before, you’ll see that the world has been completely redesigned and improved with the very best new community created islands included for you to explore,” says the studio, reminding players that the newbie starting path and character creation have all been dramatically improved.

Three founder packs ranging from $34.99 to $64.99 are now available; all of them include closed beta access. The devs have previously noted that the closed beta will run in “limited batches” to help the team sort out “queuing problems, server instabilities, lost progress and other issues that large multiplayer games might suffer from at launch.” The staggered-entry beta is expected to last up to four months before transforming into an open beta for everyone, at which time Bossa will wipe the servers. “But beta players will be able to keep special items that will not be available again after the reset,” Bossa wrote earlier this year. “They’ll also get a bit of a headstart for being a part of the closed beta!” 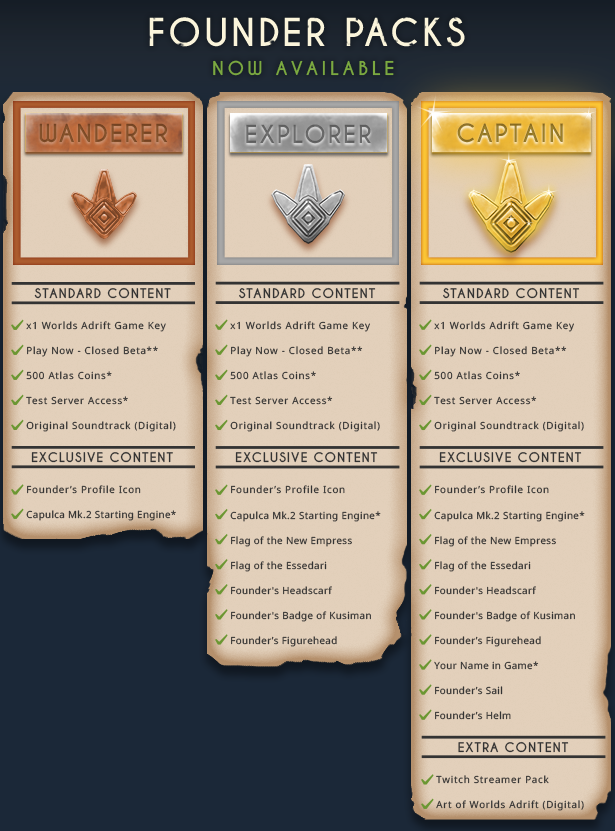 This one is on my watchlist, waiting for a gameplay video or 6 to define how the game actually works (eg will ship sit in the world when i log out, what happens on death, etc).

But I’m hopeful, this one looks unique and the builder in me is definitely interested.

Their are gameplay videos out I’ve seen a few. I’m pretty sure the ship stays in game, I’m not even sure their is ship ownership as it takes multiple players to effectively run a ship. From what I’ve seen the game is built around group play.

If your ship isn’t docked at a docking station it will disappear about 5 minutes after you log out. Just don’t log out on your ship while it is moving or it’s not going to be in the same spot when you log back in. :P

So cut those engines/furl those sails and come to a full stop. There are also respawn mechanisms you can build and put on your ship so you can bind to them and spawn on your ship.

*Things may have changed for the Beta though.

there is tons of gameplay videos from alpha since there was no NDA later in it.

When i played the alpha if you log out your ship logs out 5 minutes after.
if you die you keep the stuff thats equipped and your knowledge you drop all the stuff in your inventory.

in the beta they nerfed gliders cause people were using them to get from island to island and glider greifing peoples ships.

so no more uncatchable greifers

Unfortunately due to the physics of this game, it would have been near impossible to make PvE. Cool looking game and unique experience, but not for me. I am too casual.

So there’s no PvE?

I was killed several times by the ship components I was trying to craft, does that count?

most of the creatures haven’t been added in yet
there is this stupid jellyfish thing
the really evil manta’s that will devour your ship alive if you are unlucky enough to have your engine on and meet a migrating swarm of them(creatures in the game are organic ish meaning they have life cycles breed and eat and migrate)
then you got the beetles they eat wood and breed with it if they catch you cutting trees they will charge at you which can potentially send you flying off the island
you got the sky eagles which is still W.I.P and not in game yet
sky whales massive things really still a W.I.P not in game yet
and a bunch of other flying nonsense

Physics make PvE difficult? I’m not sure I’m following you there. Sounds like a lack of programming skills for the developers.