When it comes to public transportation, I can think of no better way to get from point A to point B than by climbing up seven stories and latching myself onto the back of a giant flea who may or may not have my best intentions at heart. Oh wait. I can totally think of a zillion better ways.

But that’s just how it is in Elder Scrolls Online’s Morrowind. Zulika Mi-Nam revisited his old stomping grounds and had this to share: “I spent a lot of time in it about 15 years ago, so the whole place is full of memories. Balmora here is where I spent the most time. I think this is a good interpretation so far — and the best part is the cliff racers aren’t as big of a PITA.” 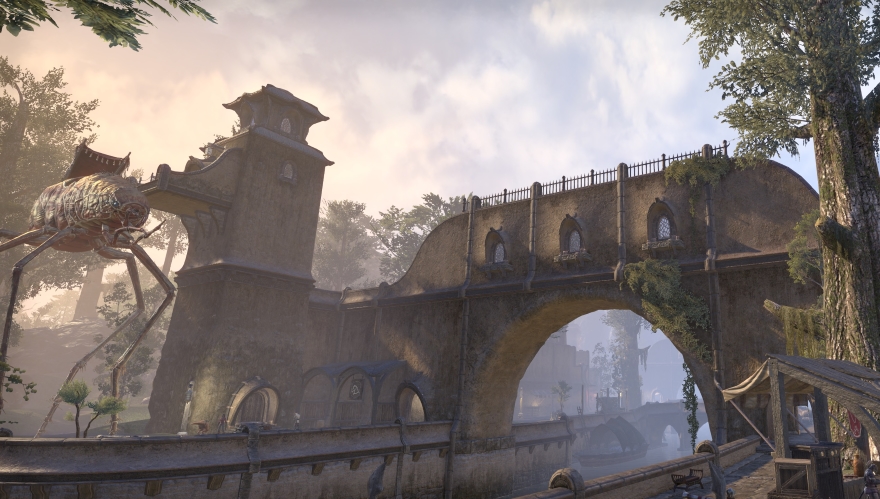 Last week’s screenshot challenge was on the subject of love and romance, and out of the pictures that our legal department would allow us to show you without tripping over obscenity laws was this pic from Star Trek Online.

“I’ve always joked that my main and his Vulcan XO are secretly in love with one another,” Mysecretid said, “but he’s so honorable and duty-conscious, and she’s so Vulcan, that they’re as useless at expressing this to one another as pre-teens at a school dance. Everybody else on the command crew knows that they adore one another… maybe one day they’ll figure it out for themselves. Maybe in a future episode? Stay tuned!”

Keep us in the loop! 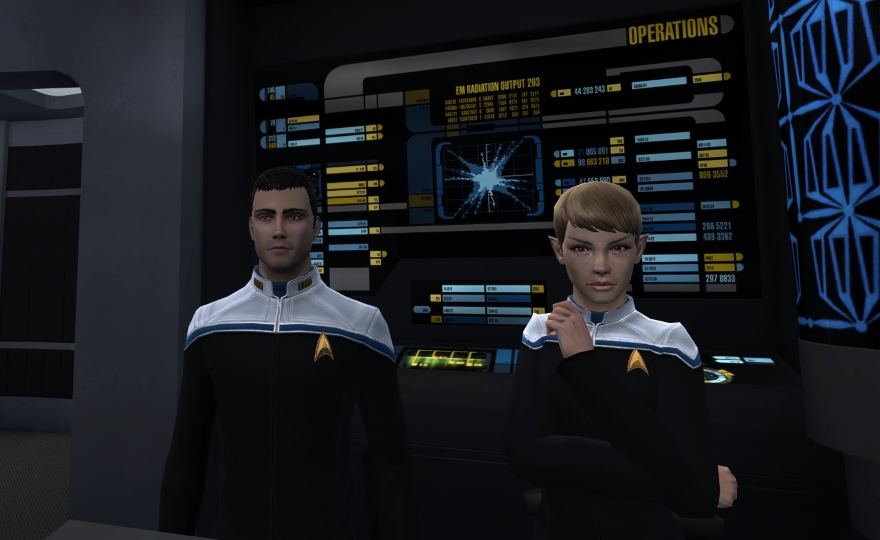 But who said that love has to be the squishy, lip-locking kind? One reader has a great example of a particular type of infatuation from World of Warcraft.

“Romancing the Rogue,” Utakata said, “A Goblin’s love affair is never made of flesh.”

Reminds me of when I was a youngster and used to break into Scrooge McDuck’s vault to frolic with my dates. 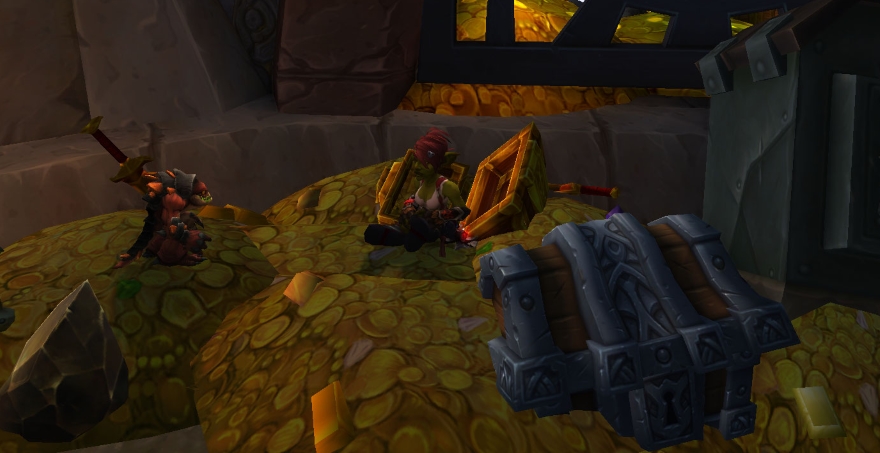 “I’m back with a vengeance. Back to Blade and Soul, that is,” wrote Rafael. “You shall not pass!”

Hey, if you want to roleplay a crossing guard in a fantasy setting, who am I to cast judgment? You wear that reflective vest and hold up that stop sign with all of the power in your inventory! 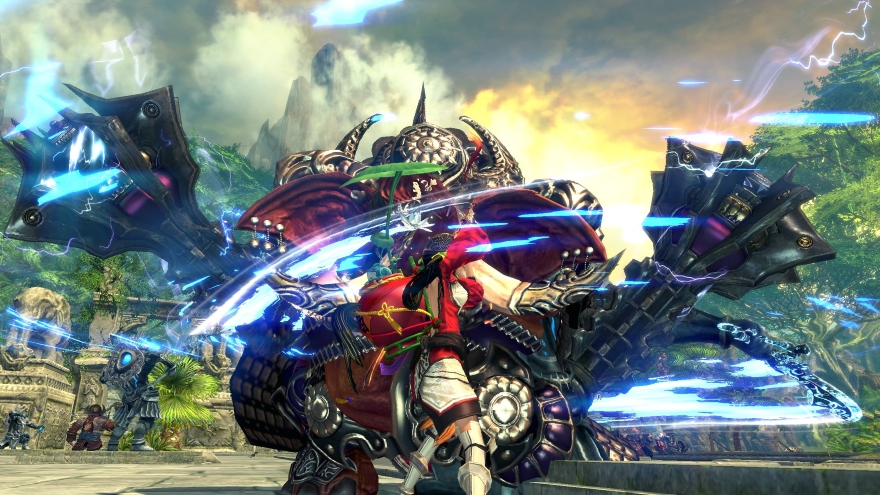 Miol takes us the long way home through Guild Wars 2: “I’m already missing the cold embrace of winter. Time for a chilly stroll through Lornar’s Pass.”

Frostbite is fun! Who needs toes when you’ve got a camera and a death wish, am I right? 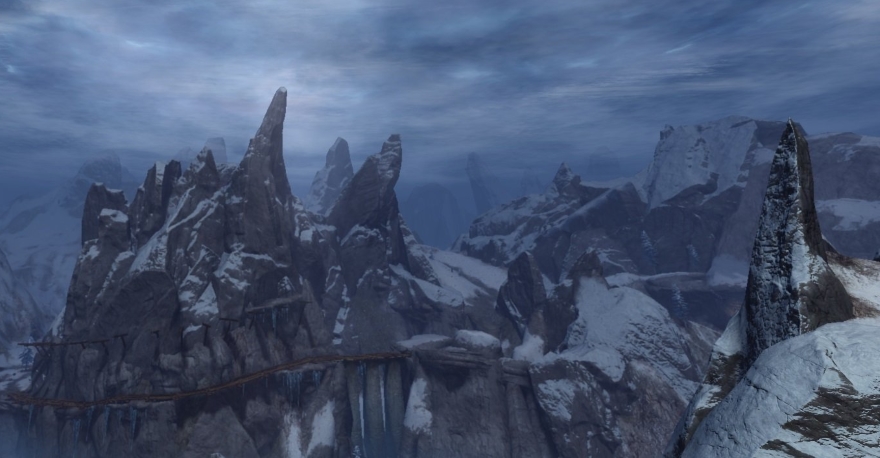 No, I’m not just freestyling rap for my latest goth record, but instead I wanted to give you your next screenshot assignment. Let’s see some pics of the more morbid and macabre sides of MMOs!

I confess, I’m surprised that my ultra-tame Star Trek pic got the romance nod from last week when we had things like Brandon’s “Jedi’s Last Kiss” and Melissa’s “Bathtub WooHoo” on offer.

Hmm. I’m going to blame it all on Russian meddling in the voting process; they seem to like that sort of thing. :-)

Love this! So very odd, in the best of ways!

The best thing was how realistic his facial expressions and gestures were. Sadly, that can’t be captured in a screencap.

It’s vaguely disappointing that the silt-striders stride rather than jump, isn’t it? I guess “silt-jumper” doesn’t have that same satisfying sibilance.

old shot from EQ2. I seen things, man. And stuff, too.

Kinda like the fantasy equivalent of what soldiers in Viet Nam dubbed “The Thousand-Yard Stare” … interesting pic.

Thanks for featuring one of mine last week! Although, it must be said, all I do is press printscreen.

Decay, graveyards, tombs, skulls? Meet a few of the citizens the Necropolis in BnS.

You see, this is what happens when you don’t believe in climate change.

Nice cap. A rather atmospheric area in BnS.

It’s oddly goth for something that’s a martial arts MMO at times. o.O

Asians have ghost stories, too.

Yep, pretty much every culture does as far as I am aware, as well as a keen fascination for undeath and the afterlife. But that wasn’t I was talking about. O.o

I’ve never played BnS. From everything I’ve seen about it, I’m surprised to see a scene like this! In a good way.

There are quite a few dark areas and stories in BnS. It’s one of the few “Asian” mmos where I’ve been able to tolerate and even like the story.

I’m also surprised to see this sort of content in an asian-MMO. Cool pic, Rafael!

Really cool. I’ll have to go back to BDO and check it out. I assume that is BDO. It has been awhile.

A few shots I’ve grabbed in ESO. The first is in the claws of /the/ big baddie! Second is in a pool of floaters! Third is, well… being a floater.

Man, that first one is a tribute to dental hygiene isn’t?

When the cutscene was playing out, that was oddly in my head, wondering how my character was surviving a blast of demonic breath! haha

Right…I’m stretching the “morbid and macabre” request…just a bit. ;)
I like the combat in TERA. I like the stories/lore, even.
I know the game takes criticism because of the sexualised female models, and especially the array of extraordinarily skimpy and ridiculously inappropriate outfits.
But you know what I like?…Choice.
TERA has lots (LOTS) of customisation options.
When the “Practical Armour” (yes, that’s what it’s actually called) was offered during the recent 5th anniversary, I snapped up a set for my warrior. I find it much better than the “morbid and macabre” desire to have her clad in a summer bikini.

The background is Pora Elinu.

“I don’t think many where looking at the background, Uta.”

I’ve posted this before, but it seems appropriate to the discussion. I too prefer to leave bikinis for the beach when it comes to female characters, Rees. :-)

Image One: It’s summer, and I really miss fall so hear are some fall colors in GW2.

Image Two: Pretty much nothing is as death and decay as Lordaeron.

Image Three: Speaking of death, lots of people have died in Wintergrasp.

Image Four: Been playing a lot of Overwatch. It is amazing how beautiful that game is.

Nice caps. I miss the fall a well.

Somehow I thought the screens are from Lotro first.

If you enjoy spelunking (i. e. caving), this one is worth a look! With all its nooks and cranies, it’s finally something for explorers again! At long last it has given Anet’s awesome map artists a new chance to utilize GW2’s abilities of verticality!

Btw: If only I had known of today’s challenge, I would have waited a little longer before posting my favorite screenshots of morbid Orr two weeks ago. ;P

Life Beyond studio Darewise rakes in over $3 million in new...